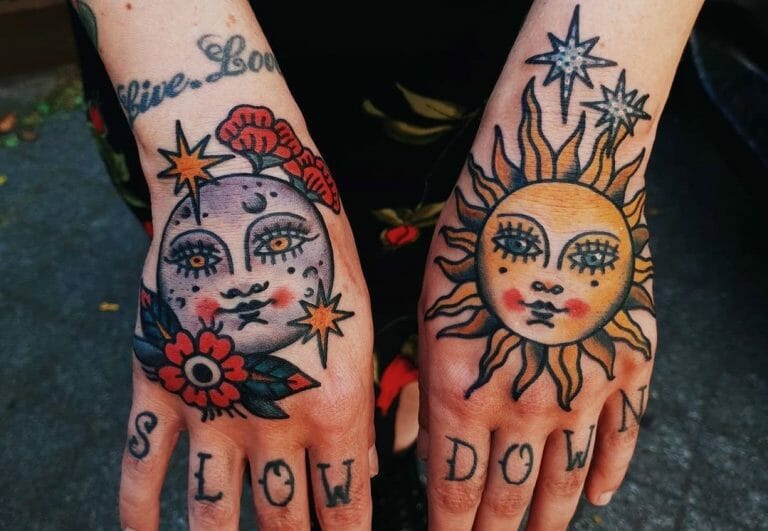 Dying to get inked with an American traditional sun tattoo? Or wondering what the hype is about? Well, here are all your answers!

While sun tattoos have been a constant popular since times immortal, the American traditional version had only a short-lived success in the last century until it got revived again in the last five years.

Before getting inked with an American traditional sun tattoo, maybe it would be nice for you to learn more about the essential features so that you can be aware of the intricacies of the design your artist is etching on your body. Relying heavily on mythology, these are often inked alongside an additional moon, to symbolise pairs or the cycle of the day.

American traditional sun tattoos had apparently begun in the early twentieth century, gaining momentum after World War II to represent both spiritual upliftment and rebellion against hierarchy. these have been revived again, and here are some of the finest innovations in this type of body art. Since traditional tattoos of these kinds are basically old school, their designs cater to established ideas instead of experimentation. For example, most of the tattoos will have highly saturated hues of black, blue or red, and heavy black outlines.

The Butterfly Cradling the Sun Tattoo

Is it easy to resist the timeless appeal of a butterfly, its wings spread wide apart, fluttering? Add to charm some mythological connotations and voila! you get some of the coolest tattoo ideas. Despite being a common symbol across most cultures, the ancient Egyptians used to believe that butterflies could transform even the most trivial, the most uncared for thing into the most precious- for the butterfly itself metamorphosed into a beautiful creature from a lacklustre cocoon. And when the butterfly carries in its wings the sun and the moon, one can be sure that it will transform the entire world into a beautiful place, at least on your body!

Two Sides of the Same Day: The Inner Ankle Moon and Sun Tattoos

This breathtaking grayscale tattoo employs a twin tattoo design of the sun and the moon in a grayscale tone. Following the basic tenets of traditional tattoos, the sun and moon here represent the universal yin and yang symbol of ancient Chinese philosophy but have been incorporated into the American culture for their dual energy vibes. In this case, however, the tattoo artist has blurred the binary and attempted to establish that both celestial bodies can have interchangeable energies in terms of positive and negative space.

The sun on the left has been inked in black and is partially concealed by clouds, implying ambiguous energy that might have shades of the yin, the darkness, but also unbridled power. In ancient cultures, this form of the American traditional sun cloud tattoo is said to bring divine omnipotence to the one who wears it, but the cloud indicates a sense of partial divination, of a sense of unfulfillment, which is why the second tattoo- the crescent moon emitting rays, inked on the other ankle, comes into being.

Notice how the crescent moon resembles the sun in its circumference. It is almost as if the moon is the other half of the cosmic eye, the yang part of the yin energy that the half-emerging sun depicts. The beauty of these tattoos is exemplified by the detailing in their art- especially in the alternating styles of the runes of the sun- the straight ones juxtaposed with crooked runes, bringing out a sense of diversity. The clouds with their small short lined textures and semi-shadowed bends are indicative of the precision and detailing that can only be found in the finest of sun tattoos.

For those who want to imbibe feminine charm in their tattoos with a hint of Oriental ornamentation, then this tribal sun tattoo might just be a perfect choice. This tattoo features a benevolent image of a smiling American traditional tattoo red sun, outlined on the right by a pensive moon with the lips slightly curled in amusement.

It is not merely the expressions of the celestial bodies in this work of body art that makes it a wonderful sight to behold, but also the skilful use of rust-red with the dark black. While the base is predominantly black, with the tint evident in the circumference of the sun, and occupying a major portion of the crescent moon, there are also subtle blends of the rust and ochre yellow in the portions not tinted with black. Particularly notable is the use of red to indicate the complexion of the sun, and the use of endearing adornments like the flower-shaped stars and the “bindi”- indicating the delicate allure of a celestial body in the Oriental imagination.

You can also think of this tattoo design as an Indianised version of the sun and moon yin yang tattoo because of the abundance of black in the moon, which represents yin, the dark, passive energy, and the abundance of red in the sun represents vitality.

For aeons, man has pondered over the symbolism of a black sun- an image that was fueled by the phenomenon of solar eclipses. Now think of the traditional black sun but in the form of an Aztec sun tattoo. The sun tattoo featured here is s bold manifestation of the great male principle of authority, courage, strength and order.

With a determined expression and symbolic triangular mark on his forehead, the sun represents here the chief or the lord, who is prepared to protect and to fight for his tribe at any cost. It is suitable for those who consider themselves the alpha of their social groups and are esteemed as experienced leaders. The use of bold lines in black gives a fearsome yet dignified outlook to the sun inked on the feet of the person- inspiring awe, and perhaps, universal acceptance of authority?

Love tattoos but do not want the extravagance of exquisite designs and bright hues? Or, perhaps, what about a tattoo that goes perfectly well with formals? Recently, minimalism has entered the arena of body art and has given rise to some quite popular tattoo ideas which are no less visually interesting.

The tattoo that we are going to talk about now features a fine blend of minimalism with some oriental symbolic meaning- that of the mandala. Many cultures of the Orient, particularly the South East Asian ones influenced by Buddhism, revere the mandala as a symbol of good fortune, healing, and balance. Said to inspire concentration and calmness of mind, a mandala etched on your body can perhaps be a soothing influence in your busy life. Enthusiasts of Japanese culture might love to take inspiration from this tattoo design for Japanese sun tattoo, hence.

The uniqueness of the mandala sun tattoo lies in the fact that the mandala has been imagined as an American traditional tattoo sun, with three consecutive arrows over and below it, indicating a concentrated emission of positive energy. The sun symbol has similar connotations to that of the mandala, especially when it comes to spiritualism, for both the sun and the mandala represents healing. Hence, the interweaving of these two common symbols might be an irresistible option for those who want to infuse their lives with simplicity, peace and positivity.

Hard rock lovers, here’s your chance to flaunt your raging spirit against the decay of society! Inspired from the Guns’ n Roses and the Grateful Dead- legendary rock bands who have immortalised the skull image in their logos, this tattoo design places the garish skull right in the middle of the flaming runes- equating the sun with the skull. The skull, which represents death, decay, supernatural universally, can be seen as a manifestation of the Greek God Thanatos, while the flames are that of Helios – the sun god.

What happens when the sun is replaced by a skull? Does this mean that the sun, which is the source of all energy, is also nearing its death? Or, is it already dead, and is now fast decaying? The use of colours is also significant, it ditches the usual bright yellow. The ink is that of metallic gold and perhaps might indicate a resolute will or the brutal truth that death will come to all.

Tranquil Sun and Moon Tattoo to soothe the eyes

Imagine the sun as human beings with supernatural powers and the moon as its vessel. This American traditional sun and moon tattoo visualizes the sun as a meditating woman, her hair flowing all around, her eyes closed in deep concentration.

Perhaps the sun is related to the ocean, for the hair is designed in the form of waves, and the interior of the moon is inked with successive waves, probably a tribute to those ancient mythical conceptions where the sun was thought to emerge from the deep, vast waters.

Inked with a lot of care and of course, a multitude of black dots, this work of art captures the sun’s zenith in its supreme. The technique used for the sun design is the handpoking style, which was popularly used for Aztec sun tattoo and other sun tattoos made by native Americans. Since electric machines are avoided, the final result and its quality depend upon the skill and experience of the tattoo artist, and as you can see, this one has turned out to be quite exquisite.

A gorgeous work of art featuring black ink in various shaded textures, this rising sun tattoo features the sun in its prime, eyes wide open, and ready to bless the world with its full glory. The runes are not simple arrows or dots but comprise a mixture of flames and arrows designed like food grains.

Since sunlight is the prime source of energy for all living beings on the earth, the choice to depict its runes with images from nature indicates fertility, and prosperity, and is definitely a good luck charm!

Notice how the moon at the left forms a perfect crescent to this American traditional tattoo sun with face, almost as if it is caressing the sun. While the tattoo might apparently seem to be ornamental, it employs mastery of geometric skills in those spacing between the runes, and the formation of the perfect half-circle of the moon bordering the smaller semi-circle of the sun.

Of late, geometric tattoos have risen into prominence because of their fine balance between boldness and simplicity, and their fascinating take on the linearity of familiar shapes, infusing them with a new outlook.

This geometric sun tattoo uses the concept of nested shapes-the scenario of the sun rising and inducing fertility is enclosed within the outer figure of a crescent moon. The celestial star shines openly, with the sun’s rays being emitted as arrows adorned with leaf blades and husk, symbolising the full potential of the sun in creating life.

The tattoo artist labels this as a “fine line tattoo” and we quite agree so! Indeed, the skilled etching of extremely fine lines to create what might be the cutest miniature sun is a sight to behold. This sun-god has his eyes closed, almost in a meditative pose, perhaps he is pensively thinking of the ways of the world, or the incredulity of the human condition, who knows? This is another form of minimalist tattoo art, with the lines and dots representing contrasting energies, but their even juxtaposition also harps on symmetry and harmonical conjunction of opposite vibes.

We hope these finest American traditional sun tattoo ideas will help you gain your next spiritual or style inspiration! If you want to try something niche from different cultures, apart from these immensely popular ideas, we have a few suggestions as well!

Other Cool traditional sun tattoo designs for you :