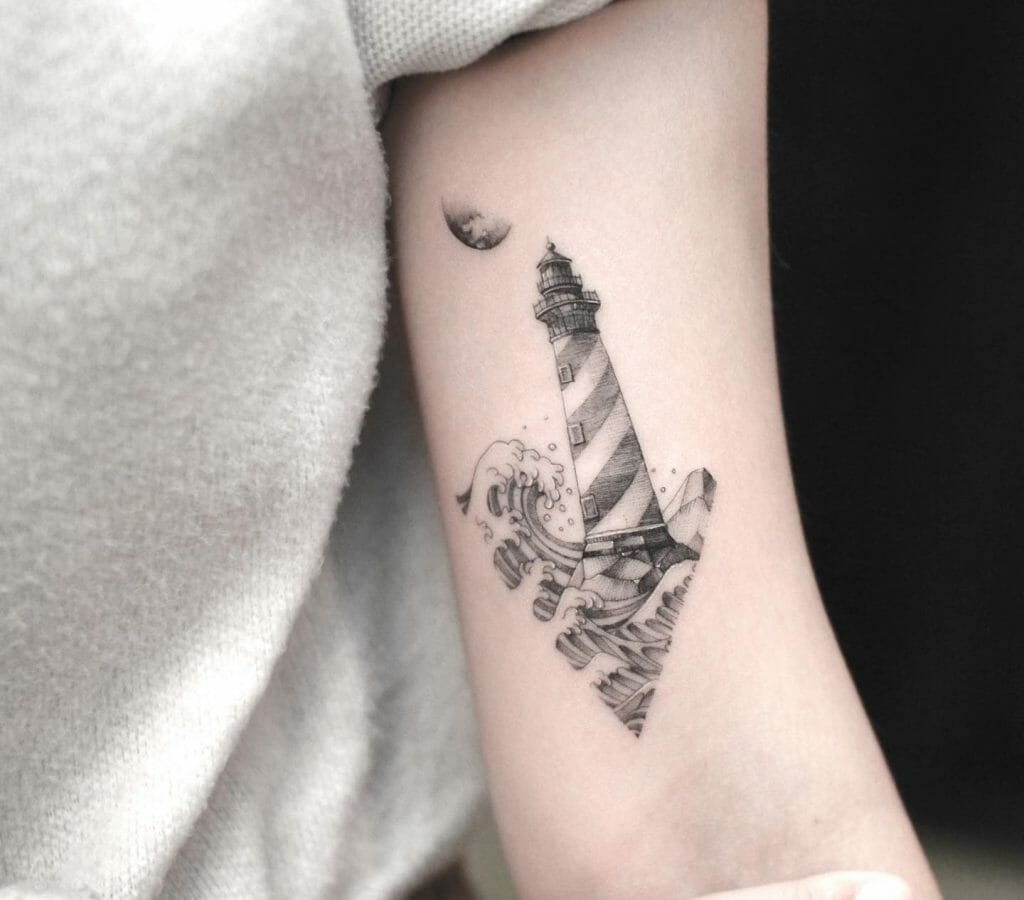 They were known for guiding ships through the long journey. Lighthouses served as the sole source of guiding light for the sea sailors.

These tattoos represent the right path and a way forward for the navigators. The lighthouse tattoos are deeply symbolic. They also possess other meanings, like the love for sailing and maritime life.

The tattoo artist of this particular piece has tattooed it with vibrant colors. This makes it stand out. Someone who gets the inspiration and sense of taking up the role of a protector in the family is attracted to the lighthouse American traditional tattoo. These illustrative lighthouse tattoos are especially perfect for travelers, sailors, and seaside dwellers.

This body art has the classic black and red duo often seen in traditional tattoos. This is a popular design in the tattoo community. The lighthouse stands as a relic of the past. They are connected to the history of traditional lighthouse tattoos deeply rooted in seafaring themes.

Colors like red, blue, and yellow are the most common when it comes to lighthouse tattoos. This particular tattoo signifies the sailor’s ability to steer the ship in the proper direction. The perfect design suggests hope. The success in being able to find meaning and the desired guidance is reflected through the tattoo.

The symbols of the swallows are a reminder of the day. It gives off an image of finding your meaning in life. In the very same way, the American traditional lighthouse tattoo is a sign of the same.

This lighthouse tattoo is one of the most pristine illustrative tattoos. The purple ink and the flashes drew present a spooky image at first glance. The symbol of this tattoo on the skin might vary from one person to another.

A lighthouse acts as a compass for the sailor in the ocean. The flashing lights represent the idea of light in the ocean’s darkness. People can get this inked as a symbol of safety and discovering the purpose in one’s life. You can get this done as a sleeve tattoo to make it look funky.

It also falls under the category of neo-traditional lighthouse tattoos because of the flashy colors 3D illustration attempts.

The anchor traditional tattoo signifies stability and steadiness in the stormy sea. This tattoo is inked with old-school black ink. People of any age can get it inked on their bodies.

It is the perfect tattoo with a deep meaning behind it. The anchor is the imagery of someone in control of the direction of their life even in troubled waters. This shows resilience and courage to navigate life with bravery and determination to succeed.

New school lighthouse tattoos have a bold, American school punched with a new school vibe to them. They usually have design elements like crashing waves, lightning, and a 3D effect added to them. This makes the tattoo look more realistic.

The floral design used makes it look more aesthetic and ornate. This hyper-realistic tattoo done by a skilled artist brings out aestheticism. This is a popular choice in tattoos these days. This lighthouse sleeve tattoo has a sense of the beauty of nature associated with itself too. The images of the flower, swallows, and the setting sun adds to the stunningness of the tattoo designs.

The traditional lighthouse tattoo meaning symbolizes a direction and guidance towards safety and steering clear of the hurdles along the path. It can also represent a way forward. This tattoo signifies a clear way of going about the hardships in life.

The tattoo thus focuses on leadership abilities too. The crashing waves here stand for the difficulties. The Lighthouse of Alexandria was among the seven wonders of the ancient world whose height was close to being mythological.

The lighthouse tattoo is considered to be both feminine and romantic. The flowers add to an appealing design. The swallows stand for the romantic imagery of finding your way back after a rigorous journey. It signifies the promise made by the sailors to their loved ones.

The lighthouse tattoo is radiant and full of imagery. It stands tall for hope for the shipwrecked sailors to help them stand back up on their feet. The beautiful clouds in this tattoo signify the ones long along the way. It is a reminder for them. It looks majestic, as if they are still watching over their dear ones with love and admiration.

One can get this tattooed as a reminder of holding on to life even after dark times and struggles. It symbolizes the lost ray of hope one finds when all seems lost and desolate. You can get it inked on your forearm or as a sleeve tattoo.

This particular tattoo has a polished glow about it. It almost stands out as one glowing in the dark. It symbolizes a refuge in the darkness for the ones who lost their way in the sea. It stands tall and majestic as the protector of the ones staggering through the waves.

The clouds behind the lighthouse seem to stand by it, providing protection and safety. It gives light and faith in the hearts of men. The tattoo symbolizes the inspiration to fight back against obstacles and never lose hope. It harkens back to the idea that there is light at the end of the tunnel.

It also carries a certain sense of romance and beauty through its old-school design. Those who want to go for a meaningful traditional lighthouse tattoo can go for this one.

This tattoo is not flashy in design. It is minimalistic in design with black ink. The lighthouse symbolizes authority. It stands alone, commanding, sound, and someone who can be relied upon.

It also represents the kind of person one is or would aspire to be in the future. As the lighthouse guides a ship towards safety, the tattoo can be seen as that driving force backing up one to strive towards greatness and protection and not give up.

The lighthouse serves the purpose of a beacon of light in the sea. It is seen to provide direction to the approaching ships. The artist has drawn it with stunning details. It looks baroque with the vintage design and colors.

It is a classic lighthouse tattoo in the true sense of the word. It is perfect for people who cherish the idea of serving as a guide for helping others along their journey. It stands as a source of courage and the constant pillar of support and determination to stay firm on its ground, fighting the glaring waves.

You can get it inked on any part of your skin preferably.

This tattoo is designed in the pattern of the anchor. The black ink used in the tattoo makes it more subtle and blunt. The anchor signifies core support. It represents the spirit of holding on to life even after being snubbed by hardships along the way.

The image of the anchor also symbolizes a guardian-like figure. People who wish to be a source of strength and assistance to someone can definitely go for this tattoo. The ones who wish for this guidance from others and their life goals can get themselves inked with this classy tattoo!

These tattoos serve as a constant reminder of hope and light in one’s life. Virginia Woolf, in her novel titled ‘To the Lighthouse’ talked about this group of people visiting the Isle of Scotland. The lighthouse signifies different things for each character. On the whole, it points out to the lighthouse providing direction not only to the ships but also to the narrative of the novel.

The United States is known to be the country with maximum lighthouses. The lighthouse tattoos are not restricted to sailors and sea lovers. People who adhere to the ideas of solitude, guidance, support, hope, and faith. among others, can get themselves inked with these tattoos.

They represent unending loyalty to the ones seeking refuge in them. Lighthouses are becoming antique these days. Due to the advent of modern technology, sailors do not find the need for lighthouses to guide them along the way. People can keep the memory of the voyagers and the lighthouses alive through these tattoos. The average price of lighthouse tattoos ranges somewhere between $60 – $250.