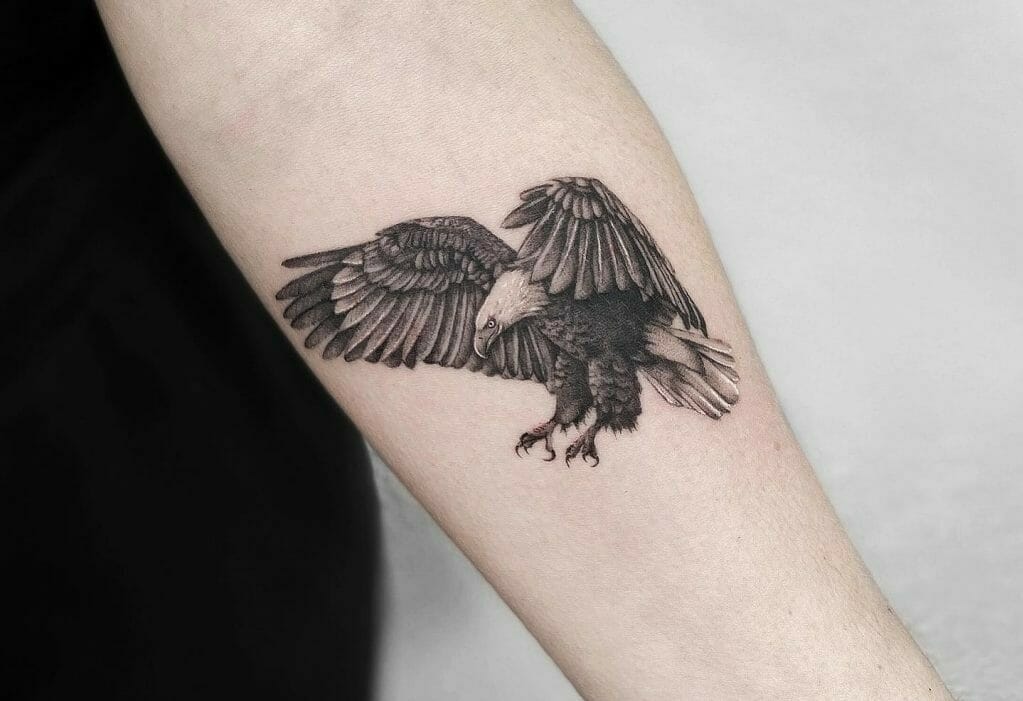 In search of some cool eagle tattoos? Here are some amazing tattoos which you should check out if you want to get an American traditional eagle tattoo.

Eagle tattoos are the most common tattoos, especially in Americans.

America’s national symbol is an eagle, to be more specific, a bald eagle. Americans often have this tattoo as a symbol of patriotism and the love that they have towards their country.

Eagles are often considered a symbol of strength and bravery. Many people consider an eagle flying high in the sky as a symbol of freedom. An eagle tattoo might represent power and they want to have an adventurous life. Eagles are considered to be mighty and a mighty eagle tattoo often gives strength to the person who has the tattoo. For many countries, the eagle symbolizes the final reach of freedom. That is why so many countries have different species of an eagle as their national emblem. There are so many kinds of eagle tattoos having so many meanings, that we have made a list of them.

This bald eagle tattoo is such a detailed tattoo. The tattoo artist should really get all the credit for such an amazing tattoo. The feathers of this eagle tattoo are so much distinctly visible. The down feathers and the feathers of the wings and the down feathers are made with such details. The eagle’s eyes and the eagle’s talons almost look like it is going to pick up its prey and fly away. This tattoo is a perfect eagle forearm tattoo.

This golden eagle tattoo has a tree as well. There are a lot of colors in this tattoo and the tattoo artist has done a lot of patterns for a different part of the eagle’s body. The eyes and the toes are of yellow color and the beak of this eagle looks so sharp. This old-school eagle tattoo would look great on arms.

This traditional eagle tattoo is a very popular choice for people who wants to have a scary look on their body. These eagles with snake tattoos give a scary vibe to the viewer and that is exactly what is desired by some people quite often. This tattoo is mostly made of black color but there is a reddish tinge in some parts. This American traditional tattoo style of making such big tattoos look best on stomachs or chests.

The Eagle With German Flag Tattoo

The eagle looks really majestic while flying with this German flag in the tattoo. This tattoo looks like the eagle is surrounded by fire, almost like a phoenix, while carrying the flag and it is flying so fast.

This American traditional eagle tattoo just consists of the head of the eagle. This tattoo is quite a detailed tattoo. The beak looks really sharp and pointy and the beak looks like it can actually kill small animals if they are hit really hard by the beak.

This American eagle tattoo is totally of black color but this tattoo has a reddish tinge as well. This light red tinge adds a great amount of color to this “only black eagle tattoo”. The eyes of the eagle in this tattoo look so good. It looks as if the eagle is searching for its prey and trying to spot any small thing that is moving.

This traditional eagle tattoo looks very different from all the other tattoos included in this list. This tattoo is totally made with black ink and is much smaller compared to the other tattoos.

This tattoo has many shapes and lines which makes it look so unique. The arrows and the compass and the feathers are all in symmetry. This small eagle tattoo is perfect for the lower arm.

This eagle tattoo design is mostly like the Mexican tribes. In a Tintin comic book, the tribal people wore masks of this design. The design of this American eagle tattoo gives a tribal look to the tattoo. Mostly the tribal people wore masks of yellow color or golden color. Even in an Indiana Jones movie that was based in Mexico, the Mexican pyramid had this kind of design on its walls.

This eagle tattoo is totally made of black ink and the patterns that are made around the eagle look as if this eagle is a symbol made on the wall and it’s cracked. The eagle on the wall is also made out of cutting stone walls. This tattoo looks great on the upper arm area.

The feathers and the beak are so much detailed. The feathers that are on the right side of the skull look so real. The skull and the feathers, both look so real in this tattoo. This eagle tattoo is looking so realistic that it almost looks like it is going to come straight out of the skin and fly away. This would look great on the upper arm.

This eagle tattoo looks so good on the skin. This traditional eagle tattoo just has black ink and the beaks and the toes are of light yellow color. The outlines of this tattoo are so thin and that gives this tattoo a fine look. The light yellow colored beak is made with such detail by the tattoo artist. The beak looks so sharp that it can actually kill a snake or a rat if it hits hard on it.

The feathers in this American traditional eagle tattoo design are done in such an intricating way that one just can’t help but praise the minute details of this tattoo. The eyes of this traditional old-school eagle tattoo are so expressive. The eyes look like it is searching for their prey and if it spots one, it is not going to give any time to the prey to even run away. This is one of the most appropriate and ideal tattoos to have on the chest.

An Arrow Through An Eagle Tattoo

This tattoo has so many colors in it. This tattoo consists of the eagle’s head and a part of its wings flung out and an arrow piercing through its head. The eagle has its beak opened as if it is getting hurt by the arrow that just pierced through its head. It looks as if it is crying out of pain that is caused by the arrow and crying out for help. This tattoo looks so much like a realistic eagle tattoo because of its vibrant colors.

This tattoo is such a detailed tattoo. The tattoo artist has even drawn the feathers so prominently. One can even spot the difference between the feathers of the wings and the feathers of the head. The beak and the nose are perfectly proportional to each other and not to miss out, the tongue of course is also of perfect shape and size. The arrow looks like it is made by tribal people because it has strings attached to it and does not have any professional touch. This tattoo would look great on the lower arm.

Many a time, eagles are considered to be a symbol of bravery and strength. Hence, quite often people want to have eagle tattoos on their skin. These realistic eagle tattoos look great on the skin as well. It quite often acts as a reminder to stay strong at difficult times. When and if there is no one beside someone during their dark days, these tattoos give them strength and courage to carry on. There are so many types of eagle tattoos that we couldn’t stop adding a few more to this list.

What is the meaning of an eagle tattoo?

An eagle tattoo generally symbolizes strength, courage, wisdom, and freedom. Depending on the design and elements used in the tattoo, it can also have other meanings such as protection, honor, or nobility. Eagles are a popular choice for tattoos because they represent power and beauty. They offer an honorable way to commemorate an important event or person in one’s life. An eagle tattoo can also be an expression of personal values or beliefs.

What are the different styles of eagle tattoos?

What are some popular eagle tattoo designs?

Some popular eagle tattoo designs include the classic American Bald Eagle, a realistic or stylized representation of an eagle in flight, and an eagle carrying a banner or other object. Other common design elements include stars, wings, feathers, arrows, skulls and crossbones, lightning bolts, and suns. Creative variations can also incorporate patriotic symbols such as flags, or incorporate elements such as roses for a more feminine look. Some people even choose to incorporate their own personal symbols, mottos, or initials into the design. The possibilities are endless!

How can I customize my eagle tattoo?

When it comes to customizing your eagle tattoo, the possibilities are truly endless. You can choose from a variety of styles, colors, and design elements to make your tattoo unique to you. Additionally, you can add personal touches such as meaningful words or phrases, initials, dates, or symbols that will make your tattoo even more special. Be sure to consult with your tattoo artist for advice about how to customize your design and get the best results. Ultimately, an eagle tattoo should reflect your personal style and values – so be creative and make it yours!