10 Best Alchemy Symbols Tattoo Ideas That Will Blow Your Mind! 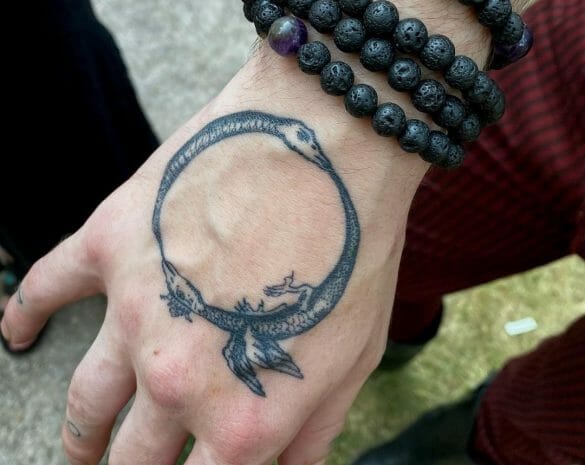 Interested in ancient alchemy symbols? Check out this list of alchemy tattoos with hidden meanings that will surely fascinate you!

The term “alchemy” is where the modern term for the science of substances i.e chemistry has been derived from!

The ancient practice of alchemy is shrouded in mystery. It is the mysterious nature of the subject that makes it suitable for inspiring tattoo ideas!

Alchemy was practised in ancient Greece, Egypt and Africa and later spread eastwards. Alchemists were highly skilled individuals who had received enlightenment through their dedication towards their practice and were custodians of the repository of divine knowledge.

Alchemists studied the physical matter and used the knowledge derived to solve problems that plagued the earth like illness. Since their knowledge was extremely valuable and capable of transforming metals into gold, they kept it a secret for many many years and used symbols to record their observations. This prevented the common man from gaining knowledge of the same.

What Are Alchemy Tattoo Symbols?

Alchemy tattoos symbolise inner transformation. Alchemists used their wisdom to heal as well as created methods to transform base metals into gold. They also studied the four elements namely air, fire, water, and earth in their various forms and different placements. The fifth element is aether which was believed by alchemists to fill the universe beyond the terrestrial sphere.

The symbols used in alchemy are intriguing, to say the least. The spirit of alchemy is its deeply mysterious nature. Every symbol has a deeper meaning that connects the four elements, air, water, earth, and fire. The mysteries of the world were revealed through alchemy and then kept a secret through the symbols used to denote the discoveries. Alchemists were deeply revered in the ancient world. Their wisdom was often passed on to the next generation as per traditions. The spirit of alchemy was kept alive by these families.

Alchemy tattoos are therefore a must-have for anyone who believes in their power of transformation and would like to connect with it through the elements of nature and the mysticism associated with it.

Alchemy symbols represent the deeper mysteries of the universe. If your soul craves deeper meaning and the ability to connect with yourself in order to transform, then we have just the list prepared for you, below!

This beautiful alchemy tattoo is an amalgamation of many prominent symbols of alchemy. The sun, moon, brain, eyes and heart all come together to create that perfect balance for life to thrive harmoniously on earth. This tattoo is full of symbolism and is perfect for those who are trying to connect with themselves.

This cute alchemy tattoo features an alchemist in a sitting position. The wise man’s face is depicted as the sun and the moon and other planets orbiting it. Full marks for the aesthetics of this tattoo. The best part about this is that it is gender-neutral. You just have to be wise enough to get it!

This tattoo features an alchemist at work. The tattoo inspiration is from the Middle Ages and the alchemist can be seen mixing the energies from the sun and moon. The energies have separated themselves into different spheres giving the impression that something magical is brewing within the alchemist’s mind. This is the perfect alchemy tattoo for the chemistry geeks out there!

This is the most gorgeous alchemy tattoo ever! The combination of the galactic colours is stunning and so is the overall vibe of this work of art. The sun and the moon are important symbols of alchemy and so are the other planets that surround the earth. This tattoo is bound to be a conversation starter wherever you go.

The serpent eating its own tail is an important symbol in alchemy called the ouroboros. It is the symbolism for infinity and wholeness. The aesthetics of this minimalistic tattoo us top class and should be flaunted by the wearer, wherever they go!

The black Pheonix is an iconic alchemical symbol associated with the creation of the philosopher’s stone that brings immortality to the bearer. This tattoo is bold and unique in every way. The Pheonix is shown to be a warrior with the sun rising out of its head. The legs of the Pheonix have been depicted by using two black snakes for an added dramatic effect. This tattoo is a must for creative souls!

This is one of those alchemy tattoos that is delicate yet powerful. This tattoo brings together two powerful alchemical symbols namely, the rose and ouroboros. The rose is symbolic of the coming together of opposites and reunification in alchemy. This combined with the ouroboros symbolises a deep connection between two individuals that is infinite in nature. This beautiful tattoo is the perfect pick for those who are looking to get a tattoo for their lovers including self-love!

The psychedelic mushroom stands for enlightenment in alchemy. This is again a cool combination of the eye symbol and the mushroom symbol. Perfect for those all set to achieve Nirvana! The tattoo is minimalistic but impactful. The shading isn’t intense and the look can be achieved easily. The eyes are trippy and dramatic at the same time.

This tattoo is perfect for those looking for a half sleeve alchemy-themed tattoo. The tattoo features a coiled viper entangled around the sun, moon, and star which are all important alchemical symbols. Although the tattoo is elaborate, the shading is minimalistic and the tattoo doesn’t look very crowded due to this reason. The sun, moon and star symbols are cradled like precious gemstones by the viper guarding it with its hypnotic gaze.

We wanted to end our tattoo curation for you with a bang! This tattoo is the perfect combination of many explosive ideas at the same time. The integration of so many alchemical symbols like the sun, air, earth held by the hand of mysteries is truly an epic work of art! The colour palette is mostly monochromatic except for the magical blue of the earth. This tattoo will require both patience and skill so make sure you hire an experienced artist to create this for you!

If you are still in doubt and wants to explore similar tattoos, check out the list below: