10 Best Aircraft Tattoo Ideas That Will Blow Your Mind! 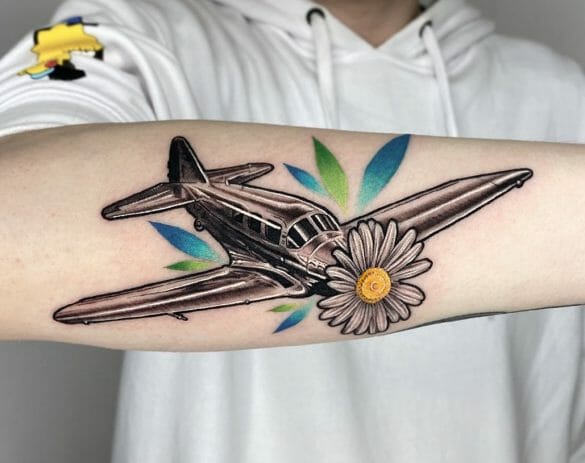 If you are an aviation or adventure lover, getting an aircraft tattoo can be the best way to show off your passion to the world.

Airplanes have emerged as a widely chosen tattoo design by most people.

There are too many directions that you can choose to go with a plane tattoo. You can get numerous options in terms of the design too.

People who work in the military, specifically Air Force, are more driven towards getting a tattoo of military aircraft or a vintage aircraft. The aircraft itself can give a lot of meaning to your tattoo without having to include any other symbol. For those who want to look forward to the future by keeping the past aside, airplane tattoos can be a great idea.

To choose the best airplane tattoo for yourself, you can browse through different kinds of plane tattoos and decide the one which appeals to you the most. Most commonly, airplane tattoos are known to represent adventure. These tattoos can be mostly found on the body of people who are adventurous since this is the most well-known meaning of airplane design. One doesn’t need to add any other symbol to their airplane tattoo to make it understandable. However, you can always have the choice of making your airplane tattoo more adventurous in different ways. It is quite obvious for the airplane tattoo to be a good choice for anyone who loves flying. If you’re a pilot, this is the best tattoo design you can choose to flaunt what you love to do in life. Those who are crazy about airplanes also take an interest in aircraft mechanic tattoo ideas like aircraft aluminum tattoos.

Regardless of which kind of airplane tattoo you choose, it is important to look for good tattoo artists to get the tattoo art done as precisely as you want. You can get an airplane tattoo on the back, arms, collarbone, neck, behind the ears, wrist, forearm, finger and ankle.

Let’s take a look here at some of the most sought after airplane tattoo designs that you can consider.

The tattoo depicts the initial aircraft designed by the Wright brothers, best for people who are more into vintage stuff. It is a linework tattoo that looks like a black and white sketch. It is going to be a good tattoo choice for people who are aviation fans. The size of this tattoo can be changed according to the place where it is supposed to be done.

This airplane tattoo idea is best suited to be inked on the lower arm. What makes this tattoo look so exquisite is the fact that it comprises a few consistent lines and a bit of sketching. This tattoo indeed looks very classic and it is equally suitable for men and women.

There are many tattoo enthusiasts who like small and simple tattoos or maybe they are afraid of getting a tattoo due to the pain caused. This tiny airplane design can be a good choice for those looking for a simple airplane tattoo. It is a small yet cute looking tattoo that can be drawn anywhere on your body like the wrist, ankle, forearm, collarbone and neck. In the given picture we can see a plane tattoo comprising of a small airplane in flight and dotted lines creating a heart.

This post features a black and grey tattoo which can be a military plane tattoo inspiration for people who are in aviation as well as for pilots to represent their love for planes. This tattoo work incorporates the use of stencil with a good amount of shading which gives it the perfect realistic look. The best place to get this tattooed is on the arms because this plane tattoo needs a larger space to be inked neatly.

Although it is a colourless airplane tattoo one can clearly notice the remarkable combination of black and grey to give it a shadow effect. Black along with grey ink has been used to draw one of the two wings of the plane which is visible in this airplane tattoo. Men who enjoy spending their life flying high in the air should ideally opt for this cool tattoo to depict their passion for life in the air.

Tattoos with quotes or lettering have been trending ever since tattoos became popular. Adding a small quote to your favourite plane tattoo design can make it look more attractive and meaningful at the same time. The small tattoo which is featured in this image shows a small airplane drawn in full black ink without any shading or outlining.

The quote added in this plane tattoo ‘I’ve got the world to go’ is appropriate for those who love being their freedom and want to travel across the world. Any other quote which suits your personality can also be included in this airplane tattoo. In this image, it has been drawn on the upper arm but you can also get it inked at the back of your neck or even your forearm. Both men, as well as women, can get this plane tattoo done if they have dreams of aviation, sky and airplanes.

Minimalist tattoos are now stealing the show like never before. The best part about getting petite tattoos is that they don’t hurt your body much. This minimalist tattoo is perfect for first-timers apprehensive about getting their first ink. Here, it has been drawn on the upper arm but a person can also get it drawn on other body parts like the ankle, behind the ears, neck and collarbone.

This tattoo is completely handmade with absolutely no use of machines as it is hand-poked. Such tattoos are usually black in colour as they don’t look so appealing with a lot of colours. You can increase or decrease the size of the airplane according to your preference but ideally, it should be kept small because it is a minimalist plane tattoo consisting of only a single airplane.

Those who want a small and simple paper plane tattoo design combined with airplane tattoo can go for this tattoo. It is a small-sized tattoo drawn in black and is best to be inked on your forearm, leg, neck, finger and neck. The best part about these airplane tattoos is that even though they are small in size, they are quite impactful.

To make the tattoo look more attractive, you can add in a bit of detail like the heart in this image. The airplane in this tattoo is connected to a paper plane by dotted lines to make a heart that makes the plane tattoo more expressive.

Those who love smaller tattoos can also opt for an aircraft silhouette or outline like the one which is drawn in this one. This tattoo shows the model of two interconnected planes. It is a linework tattoo in which both the aircrafts have been drawn just by a single continuous line.

It is a very simple outlined plane tattoo that can also be chosen as a good minimalist tattoo. The best areas to get this plane tattoo done is on the wrist, ankle and neck. The outline is very neatly drawn which makes the tattoo look fresh, unadorned yet classy. The artist drawing this artwork must be immensely skilled so make sure you go for a good one.

This image features an extraordinary airplane tattoo styled with a world map. The plane tattoo art is done entirely in black ink and a lot of linework can be seen too. The flight of a micro-sized airplane around the map is traced in simple black ink.

It is the perfect tattoo design for people who have wanderlust and are adventurous. Map tattoos are one of a kind and suitable for both men and women.

Aircraft in an Infinity Loop Aircraft

This dainty airplane tattoo will definitely grab all your attention with its unique design. It is a dot work tattoo that comsists of an aircraft flying in the sky drawn within an infinite loop. It is an interesting plane tattoo design and can keep people intrigued about its meaning. If you want a small yet chic tattoo, this one is the best option to go for.

You can get it tattooed behind your ears if you like tattoos that are concealed as it will add a bit of mysterious charm to it.

This tattoo features a bold, tenacious fighter plane drawn in black and grey ink. Most ideally, this plane tattoo should be done either on your chest or back.

We hope that you will find the tattoo design best suited to your liking in this list curated by us. To conclude, some other plane tattoo ideas that you can refer to are added below: