The Best Air Jordans of all Time 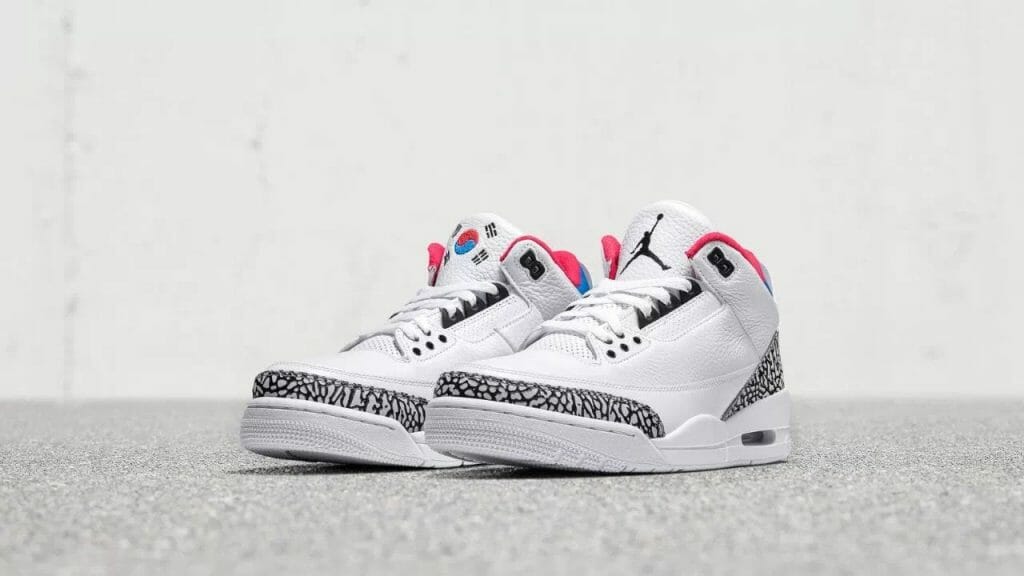 In little over 32 years, Air Jordans have become a staple of the sneaker world. In this simple, yet extensive guide, we detail the greatest models of all time.

Deciding on the best Air Jordan’s is like trying to pick which parent you prefer, it is not recommend! Whilst the latter, may leave you scrubbing the dishes, the former, is as equally perilous. Not only are there so many models and colour-ways to choose from, but every iteration pertains an unrivalled character, unique to its time of release.

From the classic I’s all the way back in 1984, to the all black jordans, to the more contemporary XX9, It is fair to say that not all Jordan models have had the same impact, both on and off the court. Because of this, and to help you in any future Nike Air Jordan decision making, we have compiled a list of the five most iconic Jordan’s that stand-out, not only because of their style but also because of their unparalleled ability to transcend time. Ready? Lets go…

We start with the inaugural Jordan, and the shoe that would go on to change the face of basketball and fashion forever. Before the mark I, all basketball shoes were white and lets face it, pretty boring. The black and red styling of these Jordan’s, however, changed that convention. It is for this reason that many so-called sneaker heads still consider these THE definitive Air Jordan shoes.

Funnily enough, MJ himself was initially reluctant to ok this ‘controversial’ colour scheme because in his words, they resembled the ‘devil’s shoe’. Thankfully, the five time NBA MVP, went on to change his mind and the rest as they say, is history.

Drawing design inspiration from Nikes Air Range, the I is now available in more colour-ways than any other Jordan shoe. The black, white and red remain the classic pick. Equally notorious are the black, blue and white colour-ways. Luckily, the wide variety of colours at your disposal means, whether you are feeling rather adventurous or indeed more conservative, there remains a Jordan I, for all needs and tastes.

The great leap forward in shoe technology and its relative heavy weight has shown us that, in retrospect, the I was not a great professional basketball shoe. The good news is that they can still be used for recreational basketball use, or indeed, better still, as an everyday fashion shoe. Pairing them with some denim jeans and a light t-shirt is always a surefire winner. The fact that, 30 years on, these kicks are still relevant and fashionable, speaks not only of the legacy of its namesake but also of its incredible swag status.

The shoe that was almost never made. After the departure of two senior Nike executives, Michael Jordan was said to be sceptical of the companies new direction. His reluctance to continue his partnership and sign a new deal, saw production and sales of the Air Jordan stall. Fortunately for all sneaker heads, Tinker Hatfield intervened. The world-renowned designer and architect convinced MJ that by working together they could make the III one of the greatest sports shoe of all time. And boy was he right!

The collaboration has lasted for more than 30 years and shows no sign of abating. This teamwork has consequently transformed the Jordan brand from manufacturer of purpose-built, basketball shoe, to desirable fashion brand. This version is iconic because of the number of firsts it introduced to the the brand; the Jumpman logo on the tongue; a visible air cushion and a mid top design- the first basketball shoe of its kind.

Now to the Elephant in the room, that synthetic print inspired by, you’ve guessed it, Elephant skin. Such audacious design had never been seen on a sport shoe before, some would say for good reason. However on these pair of Jordan’s it works, adding a light sprinkling of unfamiliarity to what was becoming an all too familiar design.

The III works well with a number of outfits. However if you are uncertain, go for dark jeans and a baggy sports top as they complement well and create the ultimate casual look.

Today the III remains popular amongst fashion conscious a-listers such as Mark Wahlberg, Rihanna and Kanye West as well as die-hard sneaker heads. If you are still not convinced, then listen to the great man himself, who admitted, in a rare interview, that the III remains one of his favourite Jordans.

Pure and simple, the V is the best-selling Jordan of all-time and for that reason alone, makes it onto the list. It seems that ‘his highness’ liked them too. Rocking these kicks, MJ managed to score a quite ridiculous 69 points – a personal best – to secure yet another NBA title. Said to be inspired by a Mustang World War II P-51 fighter Jet, of all things, the V introduced yet more revolutionary features to the brand, such as a reflective tongue, translucent rubber soles and lace locks. The stand-out feature however, is the truly Jaw-dropping (excuse the pun) shark teeth on the mid-sole.

Unsurprisingly the V comes in a myriad of colour-ways and designs. The ‘fire red’ and metallic retro Jordans are the best options if you want to play it safe. If you are attempting a true nineties look then pick the V ‘grape edition. Its blue, white and purple colour scheme will complement that snapback and baggy patterned shirt. Lacking inspiration? Then re-watch Fresh Prince of Bel Air. Will Smith’s character is rarely seen without a pair of V’s or Jordan Fusion V’s.

The Jordan that broke into the mainstream – notably dubbed the ‘Space Jam Jordans’. Highlights include, the patented leather mud guard – the first of its kind on a sneaker – and the gel based heel. Easy to see why Sole Collector Magazine voted the Air Jordan XI not only the greatest types of Jordans of all time, but more impressive still, the greatest shoe of all time.

Michael Jordan for his part always wanted the XI to be the ‘formal Jordan’. The Jordan to be wore at smart events, with a shirt and tie. You could be forgiven for thinking that MJ had taken leave of his sense, but in 1996 his wish came true. Although no official footage can be found, rumour has it that R&B band, Boyz II Men wore a pair of XI with their tuxedos, to the Grammy awards.

So there you have it! Next time you are invited to a wedding, and have nothing to wear, fret not, you can always bring your Jordan’s along. If you decide to go for the XI make sure to pick the white and black (Concords). Add a pair of dark distressed jeans and a white grandfather shirt for that ultimate smart casual look.

The last time Michael Jordan stepped onto a Basketball court he was seen rocking a pair of Jordans 13’s. For that reason alone this model will live long in the memory, not only for sneaker heads but for sports fans too.

The white quilted leather and suede means that these shoes are often seen as too fancy to wear. This iteration is not, however, all style and no substance. A great deal of technology has go into the production of the XIII, with important features, visible throughout.

If you are so inclined, you can take these Jordans for long walks as the cushioned heel and Phylon midsole make it one of the most comfortable Air Jordans in the series. The XIII heels, incidentally were designed to mimic a panthers paw. This was done to mirror Michael’s ‘Black Panther’ nickname. In addition to that, a hologram resembling the eye of a panther was placed on the outsole. Yet another sign of Hatfields unrelenting attention to detail and desire to keep the shoe’s design, faithful to its namesake.

Never mind their mind-boggling price tag, for true sneakerheads, owning a pair of these kicks is more than just a way of showing off. For many, Jordan’s have become a means of expressing one’s personal style; an extension of your fashion conscious self, if you will. It is therefore vital to keep your Jordan’s looking clean and sleek. After all, clean sneakers equal a clear mind.

The Story of Air Jordan is one of success, controversy and clever marketing. But it could have easily never happened. It is a well known fact that Jordan was not a big fan of Nike, who in the early eighties were a relatively unknown company. Instead MJ was said to have preferred Converse, who at the time were producing some of the most desirable basketball shoes on the market. It was only after much persuasion that Jordan decided to sign with the Portland based company.

It did not get off to the best start. His first release, the Jordan I, was marred in controversy. Due to the somewhat archaic NBA rules, players had stringent limits on the amount of colour their shoes could bore. This lead to multiple $5,000 dollar fines for the Basketball superstar.

This could have easily seen the partnership crash land before it had even took off. Instead, Nike kept footing the bill and as such the Jordan I gained a notoriety that saw every man, woman and child in America yearn for a pair.

The clever marketing continued with a number of tie-ins. Michael Jordan and Spike Lee came together to produce the now infamous Mars Blockmon advert. Using the character from Spike Lee’s film, ‘She’s got to have it’, gave the brand instant access to a wider demographic. The clever branding and promotional tie-ins is a technique still used to this day and explain much of the brands continued success.

Despite having retired 13 years ago, Jordan’s mystique has never evaporated and neither, has his brand. If the company continues to produce amazing footwear, it seems, it never will.

The Best Air Jordans of All Time

The true genius of the Air Jordan has been its ability to experiment and push the boundaries of footwear design. Their lack of trepidation when experimenting has sometimes lead to errors. More importantly, however, this has never held the company from coming back and surprising us all over again.

Because of this, the shoes can boast a timeless and innovative design that puts it on par with the likes of Chuck Taylor and Jimmy Choo as an icon of the footwear industry. Expect the Air Jordan brand to continue to produce memorable and stylish footwear for a long time. We can safely say they’re some of the best shoes ever.

As was mentioned at the beginning, when choosing a pair of Air Jordan’s, a lot will come down to personal preference, and rightly so. These shoes are about showing the world who you are, both in regards to fashion but also in relation to personality and character – and what better way than with a pair of Michael Jordan shoes?

Where to buy a pair of Air Jordans