10 Best Adventure Time Tattoo Ideas That Will Blow Your Mind! 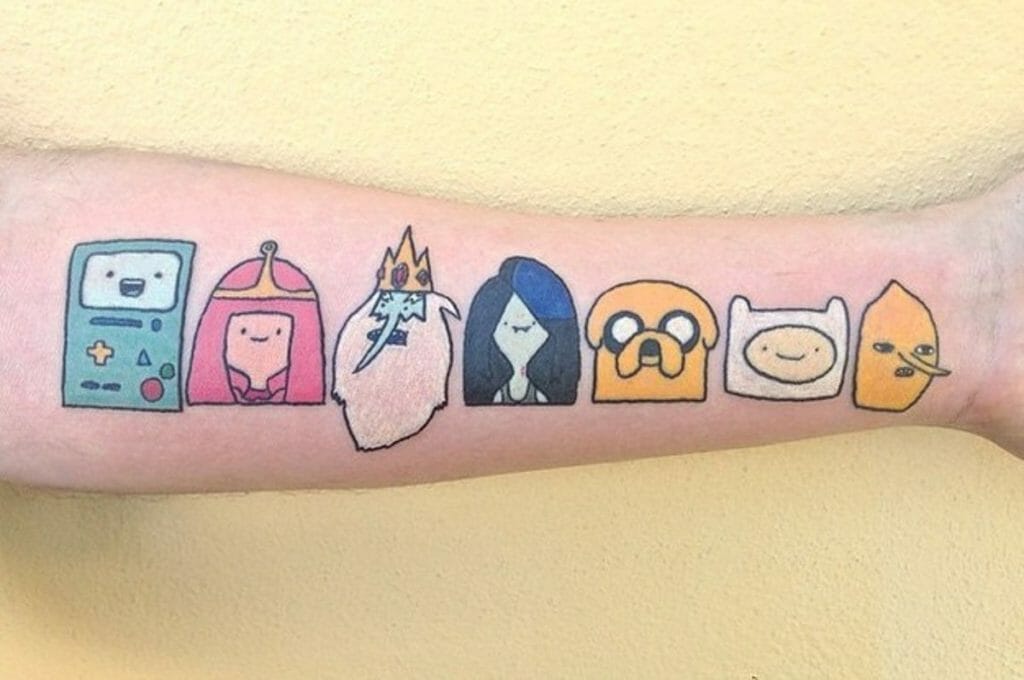 Adventure Time is a cartoon series based in the mythical Land of Ooo that first aired on Cartoon Network in the year 2010 and became an instant hit with a large number of daily viewers.

Some of the most iconic characters in this Cartoon Network show are Finn, Jake, BMO, Ice King, Princess Bubblegum, and Marceline. The series narrates the story of Finn and his magical dog Jake out on their adventures in the Land of Ooo. With a total of 283 episodes and 10 seasons, Adventure Time came to an end in the year 2018. However, it seems like the world is not even close to forgetting about this series, as even in 2021, lots of people are still getting inked with a tattoo that pays homage to the franchise.

A simple and charming outline tattoo of Finn and Jake could be the perfect tattoo choice for those who like clean and plain designs. Even though this tattoo seems quite effortless, the dotted shading certainly adds a kind of depth to the tattoo. Such a tattoo will look good on your arms or legs.

If the fun vampire queen Marceline is your favourite character, then this outline tattoo design depicting her is undoubtedly one of the best choices. Even though the tattoo is a simple outline design, yet the small detailing has added a lot of charm to the overall appeal of the tattoo.

Colourful Adventure Time tattoos are truly one of the best kinds of tattoos, as each of these characters is so colourful and vibrant themselves. In this tattoo pictured above, along with the Finn and Jake, BMO has also been inked. The way this tattoo has been inked perfectly depicts the cartoons. Since this design is quite large, you can get think inked on your forearm as pictured, or even on your back, or thighs.

If you are more interested in smaller colourful Adventure Time tattoos, then settle for this option. Not only will this tattoo look vibrant on your skin, but it is extremely cute and adorable as well, as it will look like Jake, the magical dog is giving you a hug.

Who can forget the sweet love story of Princess Bubblegum and Marceline? The cute relationship between these two has inspired fan art throughout the world, and this tattoo seems to be just that. Here, Princess Bubblegum and Marceline are depicted inside a tarot card called, ‘The Lovers’. The floral motifs, use of vibrant colours, and subtle shading will have amplified the aesthetics of this tattoo even further.

If you are more into black and white designs, this tattoo is the perfect alternative to the first one. The way Marceline and Princess Bubblegum are looking at each other amongst a bed of flowers is nothing short of romantic and adorable!

The demon blood sword in Adventure Time can be considered as a character in itself. Hence, a tattoo like this depicting the sword piercing through the forearm is quite intriguing. Such tattoos often reflect the creative side of those who bear them.

Another creative Adventure Time sword tattoo would be this one. The tattoo is simple yet aesthetic due to its minimalism. On top, the title from the song in Adventure Time is inked. A couple of flowers on each side of the sword further adds some charm. You may choose to get a coloured version of this design. However, even a black and white outline piece like this is quite timeless, to say the least.

Sleeve Adventure Time tattoos can be designed in many ways. In this tattoo shown above, the antagonist from the series, Lich King has been inked in a highly detailed way, to fill the upper arm completely. Even though this is a half-sleeve tattoo, it still is highly realistic and lively. The gradient shading in the background has brought an amazing effect on the skin.

A much more detailed and exciting sleeve tattoo would be this one, as it has several of the characters like the Ice King, BMO, Jake, the magical dog Finn, and so on. If you really are that big a fan of this show and want to show your love for the characters, definitely choose this tattoo.

The snail in Adventure Time is quite an interesting character, as it stays hidden and can occasionally be spotted waving at the screen. Hence, getting a tattoo of the snail will let everyone know that you are a real fan of the show. The tattoo seen above is quite simple, yet cute and adorable. Tattoos like this look better on the wrist or ankle. The forearm is also a good option, as pictured.

A matching Adventure Time tattoo like this one with your best friend or significant other will certainly catch a lot of attention. Tattoos like this can be inked on the forearm as shown, or even on the wrist or ankle.

If you want to make a more subtle reference to Adventure Time, then opt for this tattoo which displays the name of one of the episodes. A tattoo like this one could be like an inside joke between you and whoever gets it with you.

Ideas for Adventure Time tattoos would be incomplete if there isn’t an option that includes famous catchphrases that the characters say. So, check out this tattoo of Lumpy Space Princess saying, “Oh my glob!”, which has become a famous catchline throughout the world. The inclusion of a geometric frame makes the tattoo look more put together.

If you like the Earl of Lemongrab, then here is a fine option for you! You surely know how this character has said, “Unacceptable” on the show, and what better way to depict that? Though the tattoo is quite simple, it captures the expression of Lemongrab, perfectly.

You surely remember the episode where Finn was seen making bacon and pancakes while singing a song. Hence, a quirky tattoo like this one could be the perfect depiction of that. The bright yellow on Finn and the brownish pancakes are going well together, creating the perfect contrast.

BMO is seen riding his skateboard in many episodes of Adventure Time. Hence, a cute and quirky tattoo of this recurring character will be quite the charmer. Tattoos like this look best on the arms or even on the back.

Scribble tattoos are definitely the next best thing! Scribble designs not only look cool, but unique as well. A scribble tattoo of BMO from Adventure Time like this one may spark your interest. The way the tattoo has been inked with some lines out of place certainly mimics a real scribble.

If you like Finn better, then go for this tattoo. The purposeful strokes and lines make this tattoo look like a scribble or even a sketch. This would definitely be a piece of art that becomes a close part of you. You may even choose to add other characters or ask your tattoo artist to add some colours, as well.