10 Best Ace Of Spades Tattoo Ideas That Will Blow Your Mind! 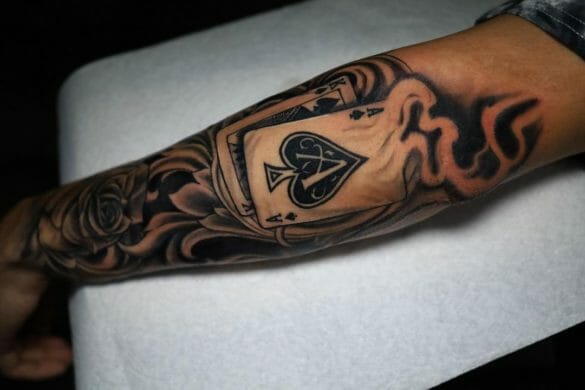 Have you ever found yourself wondering what does an ace of spades tattoo mean? Well, find the answer right here on this amazing list compiled by us!

The Ace of spades card is the highest and most valuable card in playing card decks.

During the 17th century, King James I and later on Queen Anne implemented laws that you require printing house to print their insignia on the Ace of spades cards. Ever since then, the ace of spades has been often used as the highest value card in the deck of playing cards.

Let your imaginations run wild and show off your cool side with the many aces of spades tattoos and designs that will help you stand out in a crowd thanks to the popularity of the idea!

This minimalistic ace of spades symbol is a great look for people who want to get their first tattoo and want to make sure that is it on the down-low! Ace of spade tattoo designs like these are easy on the eye thanks to the simplistic meaning of the tattoo.

During the Vietnam War, American soldiers painted the ace of spades on their helmets as they went into war! The Vietnamese soldiers saw this as a sign of death due to which the ace of spades tattoos with skulls has become infamous as it represents death! Ace of spade tattoo design with skulls is a must-have for people who want to try something different like going for a metal look or just want to feel the power of being badass!

From our perspective, the context of the tattoo might relate to how the person with the tattoo thinks of life as a gamble with the watch adding an extra bit of details like how to value time and life! However, do not read too much into it as tattoos like these are open to interpretation as they can meanings behind them are not clear!

This tattoo idea resembles the “Four of a kind” ranking in Poker games and is one of the highest value card set that one can achieve! Even though there are other aces in the tattoo, the focus is mostly on the ace of spades as the ace of spades is often referred to the as highest card in the playing card games! The dices are inked to add further details and value to the tattoo! Even though tattoo designs like these are large in nature, you can get the size decreased to put it on any part of your body!

Hand Ace Of Spades Tattoo Design For Men and Women

Yet another next-level tattoo that is detailed to the brim! The ace of spades symbol is neatly inked on the wrist and is accompanied by another card from the set that represents the Joker card! These ace of spades tattoo designs are usually done in all black but you can ask your artists to fill in colours to make them look badass! The size and shape of the tattoo are up to you as there is no bad call!

This amazing tattoo is yet another of many aces of spades tattoo designs that incorporate the portrait of a reaper in it! The tattoo has 4 aces in it and the centre of it is the ace of spades. In the middle of the spade is a skull figure that often links the tattoos to the symbol of death or good luck, or related to asexuality or romantic people depending on the interpretation of the tattoo style. The black and red colour of this tattoo helps the tattoo pop!

Like most other tattoos, the shape and size of tattoos like these aren’t limited either as they can be enlarged or shrunk and inked on any part of the body.

Arm Sleeve Ace Of Spades Tattoo That You Will Love

This is another common ace of spades tattoo designs that you can get inked on your arm sleeve as it is a full-sized tattoo idea! The idea behind the faded design of the card is integral as it plays a part in representing the wear and tear the person has gone through to reach the part of existence! The ace of spades symbol can either be used alone or with other cards like a royal flush or a straight flush!

Ace Of Spades Tattoo For The Free Soul

The detailing on this ace of spades playing card tattoo is amazing! The card is placed in the middle of the design and a flower is placed above it to give it a more soothing look, as most of the ace of spades tattoos are a symbol of death or an idea to show masculinity!

This tattoo is a great detour from the search for power and the common death-related idea as it focuses more on the soothing side. If you play your card correctly then you can easily flaunt this amazing tattoo of aces on any part of your body!

If you are a comic book fan and in the search of an ace of spades tattoo that you would love to get then this is the one for you! The ace of spades is flipped upside down and inside the spade is the easily recognizable face of Batman’s nemesis Joker! These type ace of spades tattoo designs are common among comic book enthusiasts so may want to change yours a bit so as to not find the exact same tattoo on someone else’s body!

This gorgeous design is a really creative design as it incorporates the ace of spades design in the form of wings! This ace mark is uncommon and designs like this are slowly gaining popularity in recent years on the tattoo site! In case you want to get this design to get inked on your body you might have to search for a good artist as an ace tattoo like this is tough to recreate!

With all that said, here are some things to keep in mind when you do decide to get inked!