10 Best A7X Tattoo Ideas That Will Blow Your Mind! 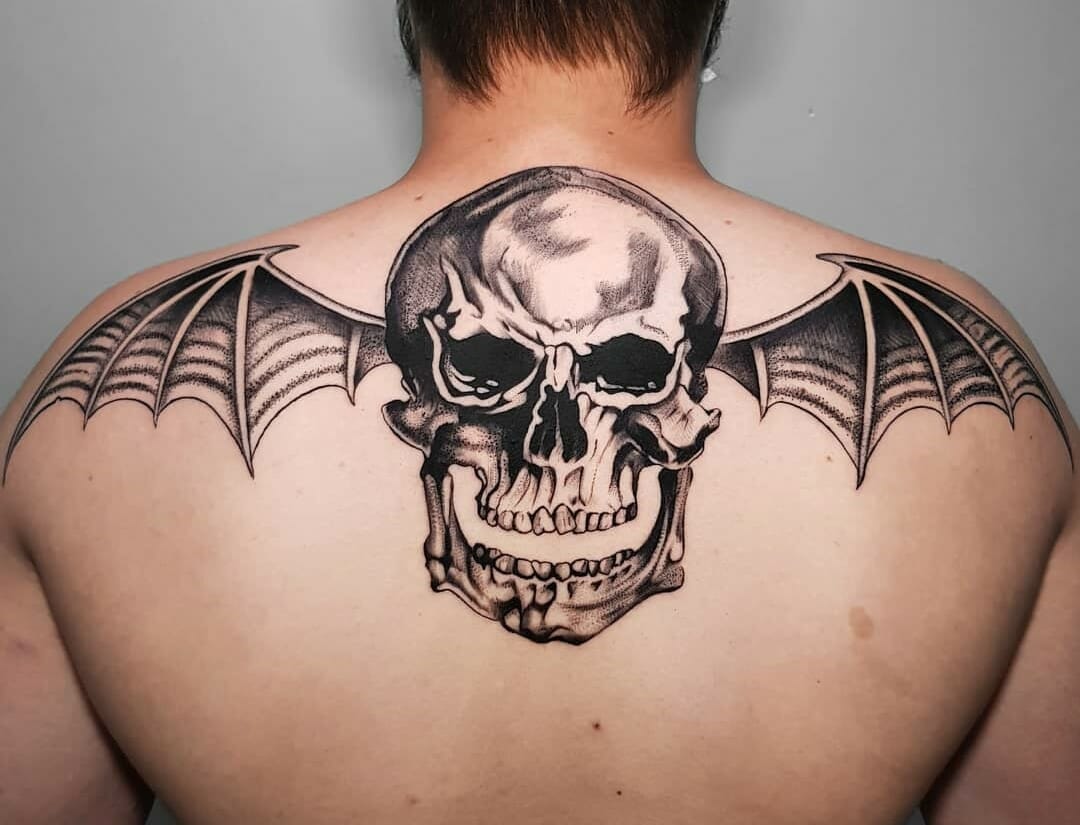 Unleash the metalhead in you by getting an Avenged Sevenfold Tattoo. Find the best A7X tattoos to find inspiration, curated just for you!

The band has been influential and popular in the metal community, telling over 8-million records to date. They ranked 47th on Loudwire’s Top 50 Metal Bands of All Time.

The deathbat is the official mascot of Avenged Sevenfold. It is a sign that has been featured on multiple albums and merchandise of Avenged Sevenfold. It is basically a human skull with skeleton bat-like wings. This chest tattoo is perfect as the chest offers a wide space for content like this. The piece is in black and white and the shading is impeccable. Kudos to the tattoo artist who did this wonder a7x deathbat tattoo. A7X tattoos are hardcore and this death bat chest tattoo surely represents the metalhead in you. This is one of the most simple tattoos on this list, and

The Portrait Tattoo of M. Shadows

Matthew Charles Sanders, popularly known as M. Shadows, is the lead vocalist of Avenged Sevenfold. He is widely considered one of the greatest metal vocalists in the modern era. This portrait tattoo shows him in his natural element wearing a pair of aviators and holding a mic. Portrait tattoos are difficult to pull off but this one perfectly captures his facial expressions. His deep baritone and powerful voice have mesmerized millions of us and a tattoo tribute to him would be perfect for any hardcore fan of Avenged Sevenfold.

Avenged Sevenfold is known for its hardcore album art. Her you have the album cover of Nightmare, which was released in 2010 by Avenged Sevenfold as a tribute to Jimmy “The Rev” Sullivan, the band’s lead drummer who died of a prescription drug overdose in 2009. This is among the coolest tattoos on this list for sure. Other album arts that are equally menacing designs are City of Evil, and Hail to the King. Album arts are definitely one of the best ideas for A7X tattoo designs. This Avenged Sevenfold tattoo of their album cover is sure to get a love of love at your next gig.

Our beloved Zacky Vengeance, the rhythm guitarist of Avenged Sevenfold, paid his tribute to Jimmy by getting a foREVer sign tattoo on his neck. This is extremely thoughtful and personal as it immortalizes Jimmy. His death shook people all across the globe and getting a tattoo would be a great tribute to his memory. The foREVer sign has become a sign of respect and remembrance in the Avenged Sevenfold community. Zacky’s neck tattoo is perfect to get a small and meaningful forever tattoo a7x style. This is also an Avenged Sevenfold tattoo that a band member has himself so that makes it more special. This surely is one of our favourite tattoos on this list.

A twist for all the Latin American fans of Avenged Sevenfold. The Day of the Dead is a holiday where people spend time with the ones that they have lost. Sugar Skulls are colourfully decorated replicas of human skulls that are laid on the tombs as a tribute to the lost ones. This deathbat tattoo is in the style of a sugar skull which pays a traditional tribute to both the band and The Rev. This is a great creative take on the Avenged Sevenfold logo and such unique sign tattoos are definitely appreciated in the tattoo community.

A Little Piece of Heaven On Your Skin

A little piece of heaven is one of the darkest songs written by Avenged Sevenfold and an a7x tattoo dedicated to that is just perfect. The song features an animated music video depicting 2 lovers and their eternal love that transcends death. We see 2 skeletons, male and female, dressed with knives in their hands. We don’t want to add spoilers while describing this a7x tattoo. This is one of the coolest ideas in this list of Avenged Sevenfold tattoos.

The Portrait Of The Rev Tattoo

Jimmy “The Rev” Sullivan is an icon in the world of heavy metal. His fast-paced and aggressive beats made millions of people all over the world headbang like crazy to Avenged Sevenfold tracks. This portrait of The Rev makes a perfect tribute to our fallen metalhead. We like the hauntingly white iris which gives him an evil look, keeping the metalhead spirit alive. The tattoo artist gets the details on-point and you have to agree that the shading makes it a really realistic portrait a7x tattoo.

The Deathbat Tattoo For Panic! Fans

Although Panic! in the Disco isn’t a heavy metal band, their lyrical and musical themes attract the attention of most metalheads. It has been the go-to punk rock band for millions in the metal community. “Too Weird To Live, But Much Too Rare To Die” is taken from Fear And Loathing in Las Vegas, a book idolized by both Panic! and Avenged Sevenfold. Fans would agree that it also pays tribute to their drummer who passed away. Truly a very creative bat wings tattoo of the deathbat sign.

Another Tribute To The Rev

Tattoos are a great way to pay tribute and we are gonna see another Avenged Sevenfold tattoo that is dedicated to The Rev. We all agree that the passing of Jimmy “The Rev” was a big shock to millions who love Avenged Sevenfold, and to the rest of the metal community too. We can see “Fiction” written over his face which indicates the song Fiction, a song which is considered as The Rev’s suicide note as the lyrics explore suicidal themes and was recorded 3 days before he was found dead. Getting this tattoo is a sign of respect for Jimmy, whose sad demise still haunts many. Immortalize and preserve his legacy in an A7x tattoo.

Another deathbat tattoo recommendation on this list, but this is a smaller and more logo-like version of it. Man, the deathbat sign sure looks very menacing. People who are into music have a tendency to get tattoos of the sign of their favourite bands and this is a great addition to an idea like that. You can see Aerosmith and Slipknot logos as well. The typography is done masterfully by the tattoo artist as well and keeps the entire tattoo design nice and compact. A must-have a7x type tattoo if you are a hardcore fan of Avenged Sevenfold.

A band adored by many, Avenged Sevenfold is a name that we all love in the world of metal. In this curated list of Avenged Sevenfold tattoos, you can find many different tattoos of their deathbat sign and other themes from the band’s work. Man, making this list of tattoos took us down memory lane for sure. Make sure you find a tattoo artist who is skillful to keep every detail neat and clean so you can flaunt your A7x tattoo in the next gig. You should discuss and finalise your idea before the artist makes the a7x tattoo stencil. We hope this list ends your search for the perfect Avenged Sevenfold tattoo.