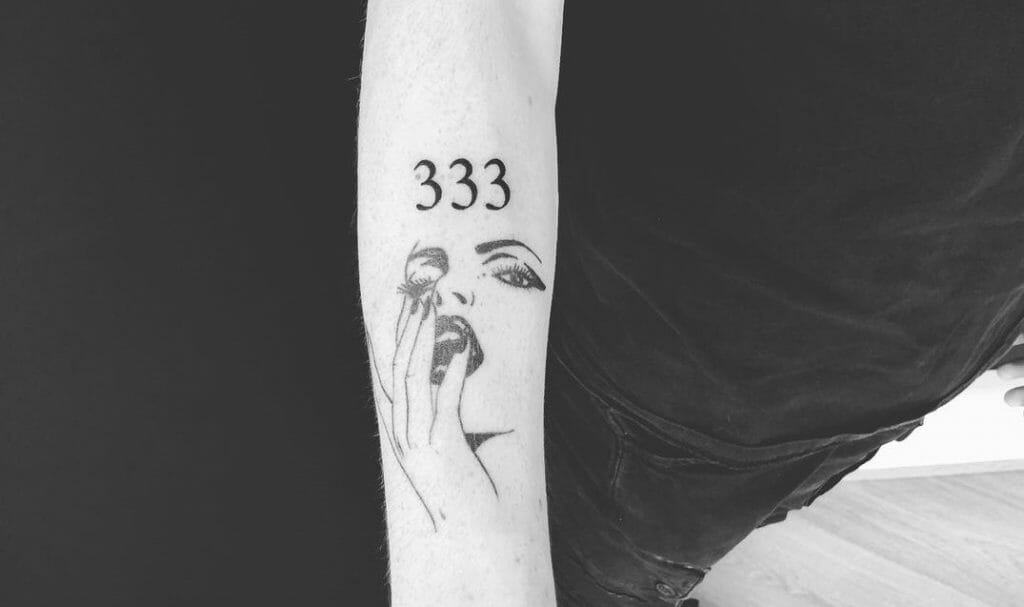 While number tattoos are gaining popularity these days, how about you engrave a number closely related to religion or spirituality instead of tattooing a random number, for instance, a 333 tattoo?

If you’ve been seeing the number 3 or a series of its repetition at random places, it’s time you consider delving deep into the hidden message behind it.

You probably wonder sometimes that how your existence is insignificant in front of this vast universe! But, little did you know that the universe manoeuvres in strange ways to communicate with you at times.

Some people believe that repeating numbers may indicate imminent changes or foreshadow coming good fortune. Angel numbers show up in our lives almost every day, and not all of us are aware of that. To many people, they are special signs of advisory from their spirit guides, guardian angels, or some higher beings; others may believe it is nothing more than coincidence. The bottom line is that the universe works in mysterious ways to send us a message.

The sacred angelic numbers are said to be quantitative codes of energy, vibration, and communications among the angels. The first three numbers are considered the most spiritual of all. 333 is a powerful number for spiritualists. Sources affirm that the first three digits symbolize the Holy Trinity—the mind, body, spirit connection found in many religious doctrines. Angel Number 333 is considered auspicious and is associated with love and selfless acts.

The number 333 can indicate divine intervention. It can point out that the time is right to reach for your dreams, to move forward with your lifelong goals, or to take that big opportunity that could change your life. It’s important to stay positive because the universal force is working in your favour. There isn’t an exact spiritual meaning of Angel number 333; there are multiple meanings and interpretations available. If you explore the Angel number meanings, you’ll come across lots of explanations. We’ve made it easier for you and picked a variety of 333 tattoo designs with different meanings. The catch is, only you would know the secret meaning behind your number tattoo. Let the world guess it.

The Roman numerals in this tattoo represent two dates. The wearer has probably commemorated someone through this date tattoo. And Angel Number 333 in the middle might symbolize that the dedicated person is acting as a guardian angel to the wearer. If you have lost someone recently and want to get a tattoo in their memory, and if you believe them to be watching over you from heaven, then you should go for this 333 tattoo.

A simplistic black 333 tattoo is there to remind you that you have the potential and creative source to achieve all your dreams, and your paths are being guided by some higher spiritual entity.

When getting a number tattoo, that too, as significant as the Angel Number 333 tattoo, you must consider the tattoo font. The overall appearance and impact of your tattoo depend quite a lot on the font you’re choosing. Since the number 333 is widely associated with Christianity, the Old English font will give your tattoo the perfect archaic look it needs.

Red is a colour of assertion. A 333 tattoo in red ink is loud enough to let people know that you’re powerful. Whenever you feel powerless and lonely, this tattoo would remind you that you’re not alone; in fact, you are being watched by your guardian angels. It will remind you of your capabilities and rid you of self-doubt. Some people have tattoos rune symbols instead of numbers to signify certain elements such as energy, courage, good luck, health, and protection. Add a special character like this tattoo, and you are good to go.

A vertically aligned 333 tattoo seems more powerful, especially when it’s in red. It can mean that you’re at the peak of your confidence and potentials. And you’re headed to exactly where you should, as guided by the universe.

This tiny finger tattoo will mostly go unseen if not observed carefully. But tattoos are mostly meant for the wearers’ satisfaction. It doesn’t always matter if people can catch a glimpse of it and get intrigued. A tiny 333 Angel number tattoo can mean that you’re taking little steps towards your goals. You’re gradually expanding your beliefs and slowly headed towards your victory.

Butterflies represent change or transformation. A butterfly sitting on a 333 number tattoo can symbolize that the wearer is going through or has gone through some transformative phase in his or her life, and he/she finally feels comfortable with himself/herself. This tattoo is replete with positivity that brings hopes of a vivid, colourful and undaunted life.

Chest tattoos are a bold move in themselves. The trinity angel number engraved on the chest can be symbolic of the wearer’s strong belief in Jesus and their guidance. The spiritual realm works in mysterious ways. But if you firmly believe in it, you’re likely to get benefitted from it.

This linework 333 tattoo can indicate that the wearer is trying to find a missing piece of his life or trying to find a balance. If you’re in a metaphorically dark place, Angel Number 333 is your guidance. Your spirit guides are guiding you to light. Add a little shading to your simple yet beautiful tattoo and see the magic number affect your life in mysterious ways.

Wrist tattoos are way cooler than tattoos on other parts of your body. The 333 Angel tattoo inked on your wrist would make a special connection between you and the whole universe. Instead of filling the inside of the tattoo with black ink or other colours, just an outline of the numbers in black looks bold and elegant.

333 is also a famous Vietnamese beer. So, what may apparently seem like your Angel Number tattoo, can actually be empty of any spiritual meaning.

If you don’t want a plain Angel Number 333 inked, then you can couple it with some other tattoos as well, such as – a pegasus tattoo, small feather tattoo, dots tattoo, teardrop tattoo, animal or bird tattoo, boot print tattoo, and others. A number tattoo cannot only be seen in religious affairs; it is also a common prison tattoo since inmates are mostly known by their numbers in prison. Other common prison tattoos include the number 1488, clock tattoo, teardrop tattoo, spider web tattoo, five-point crown tattoo, three dots tattoo, etc.

Here are some other varieties of Angel Number 333 tattoos:

Still looking for inspiration, then checkout this blog post about Roman Numerals Tattoo.

Still looking for inspiration, then checkout this blog post about Kids Name Tattoo.