10 Best 3 Dots Tattoo Ideas You’ll Have To See To Believe! 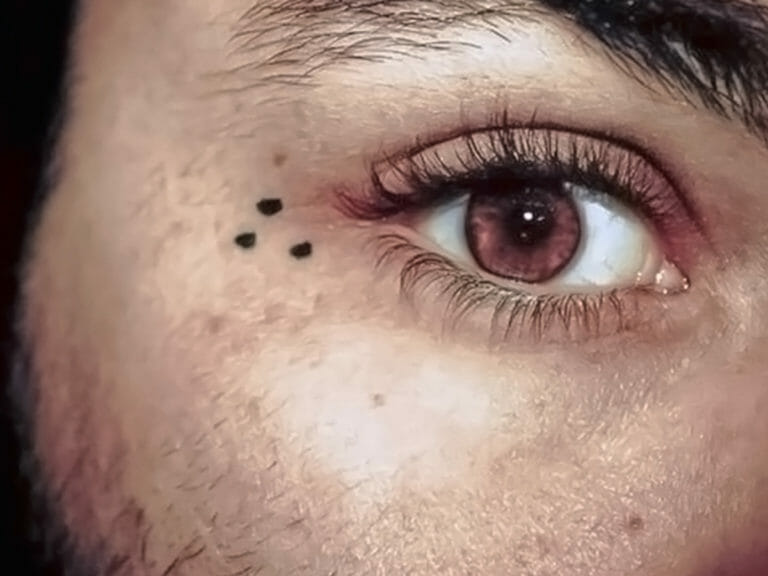 Looking for a simplistic tattoo idea packed with deep meanings? This compilation of some of the best three dots tattoo designs might help you make the right choice!

Overall, the three dots tattoo might appear as a very simple and bland design but once you get to know the details about what does the 3 dots tattoo mean actually, your views on this design will definitely change.

The placement and arrangement of the tattoo have a great influence on the 3 dots tattoo meaning – that is – the meanings change with the way they are positioned. The dots can be arranged in various ways, each position symbolizing different meanings.

In this generation, minimalist tattoos have created quite a stir among tattoo enthusiasts. Since getting a tattoo is an almost permanent investment, you should know the meaning of the tattoo you are investing in. If you’re wondering what does 3 dots tattoo mean, we have got you covered and will help you understand the meaning of each symbol of three dot tattoos. Once a prison tattoo, this symbolic tattoo design is currently worn by people from all backgrounds. The three dots represent the connection between the Father, Son, and the holy spirit. The representation of the number three as a holy trinity symbol in the Christian culture is probably one of the reasons why a person with this tattoo finds a connection with a higher power, even if they are behind bars.

In a literal sense, a three-dot tattoo placed in succession represents ellipsis, a symbol used in grammar to represent something incomplete. This abstract design of the three dots tattoo is symbolic of continuation, a representation to carry on an unfinished journey without giving up. The modern tattoo business has found ways to combine the three dots tattoo with other designs to represent it as a more appealing one. Look at these 10 ideas we have curated for you if you plan to ink a permanent three-dot tattoo on your body.

If you want the simplest of all designs, you can go for a minimalist three-dot tattoo. Interestingly, in contrast to the crazy gang lifestyle, the three-dot tattoo design also has a religious connection. A minimalist three-dot tattoo can be arranged in three ways: you can either opt for the vertical and the horizontal line arrangements of three dots or you can also get the classical triangular pattern. Since the theme is to keep it small and minimally detailed, the dots above are inked micro-sized, rather resembling a point. This small piece looks great on any part of your hand ranging from shoulders to fingertips.

The Father, Son, And Holy Spirit Symbolism Of The Three Dots Tattoo

In the past, many people used to ink this triangular symbol to symbolize their imprisoned life. However, as hard it is to believe, a prison tattoo like the three-dot tattoo in the triangular shape also has religious symbolism. The number three symbolizes the sacred trinity of the Christian religion. It is believed that many prisoners with this tattoo felt a spiritual connection when they were behind bars and this tattoo made it happen. So if you’ve been looking for some spiritually connected designs, this design might be it for you.

Three dots Tattoo On The Fingers

Did you know that the combination of various patterns and arrangements of the three-dot tattoos on the fingers has currently become very trendy in the realm of small tattoos? The thumb and the forefinger are commonly used for inking this symbol although other fingers can also be used. Otherwise, you might also amp up your tattoo game by getting two tattoos arranged in different positions in two separate fingers like the one in the image, the more the merrier!

If you want to preserve the history of the three-dot tattoo while getting an incredible design for yourself, this design is a perfect match. In the past, the three dots tattoos were commonly seen in the gang lifestyle. The three-dot tattoo symbol is associated with a famous Latin American saying ‘mi vida loca’, which translates to my crazy life in Spanish. Each dot of the symbol represents a single word of the phrase. This was a common catchphrase of the gangs of Central America. They used to wear this tattoo as a badge of honour usually on visible parts of the body to represent their crazy life. It depicts such a gang member who wears his three-dot tattoo on the face with pride and confidence.

Since the three-dot tattoo design has gained popularity, people have been experimenting with it however they can. Popularized by the members of gangs, this has become one of the trendiest simple tattoos of the present generation. Apart from being associated with the gangs and their lifestyle, the three-dot tattoos also have deeper spiritual meanings. In the above image, you can see three dots imprinted on two parts of a rugged hand that appear to be tied in a handcuff connected with the ‘Peace’ symbol. This particular piece produced by combining a contemporary design with the tattoo’s traditional history is a spectacular design that you can get. You can get this fancy art tattoo if you opt for an elaborate design as well as there are many designs available in the market.

Three Dots Tattoo As The Ellipsis

Tattooing a grammatical mark can be a great way to symbolize a tattoo. The literal meaning of three dots placed in a row is the grammatical sign called ellipsis. The 3 dots in a row tattoo meaning is comparatively simpler and popular among the followers of this tattoo design. We typically use the ‘…’ symbol to denote an incomplete sentence. Getting a simple three dots tattoo like this one is associated with the belief that the story is not over yet, better opportunities may be around the corner for the person.

Now that you are aware of what does 3 dots on a finger tattoo mean, there is another design that you might be interested in. The three-dot triangle tattoo is a more traditional design than the row tattoos. The trend of tattooing three dots in a triangle was typically popularized by these gang members but now the shape is also associated with peace too. The three-dot tattoo on prisoners or gang members represents honour. Similarly, if you want to portray your commitment to world peace, this simple piece works wonders. The common places where a person can get a tattoo of this shape are on the chin, around the eyes, between the thumb and forefinger, and on the wrist.

The three dots tattoos are often confused with the four dots and five dots tattoos because of the obvious similarities. However, the number of dots plays a significant role in the meaning of the tattoo symbols. For example, the four-dot tattoo referred to as quincunx represents the prison walls, and adding another dot to it in a pattern shown in the above image symbolizes the number of years spent behind the bars. Therefore combining the series of four and five dots together with the three-dot symbol certainly elevates the meaning of the tattoo.

These small and meaningful tattoos are associated with many rich meanings that are unique and symbolic. Interestingly, its symbolism has also found a place in the religious culture of India. According to the Hindu superstitions, three dots tattoo inked in a triangular pattern on the visible parts of the face like pictured in the above image protects a person from the eyes of evil spirits by deviating their attraction to the dark dots. So if religious symbols fascinate you, look no further than a three dot tattoo design.

Symbolism Of Three Dots Tattoo In Triangular Pattern In Braille

The vast treasure of meanings of the three dots symbol really amazes us. Did you know that the triangular tattoo design has found another meaningful depiction even in the Braille system? In braille, three dots placed in a triangle represent ‘I am enough’. So the reason behind tattooing the dots generally close to each other is because they represent a single phrase. If you are a fan of quote tattoos, the triangular three dots tattoo is an abstract piece that might interest you.

If you are looking for other simplistic small tattoo ideas then the five dot tattoo is a unique design that you might like. It looks a bit similar to the three-dot ones but the extra dots give it an additional dimension. Some great ideas of five dot tattoos are: