10 Best 2 Face Tattoo Ideas That Will Blow Your Mind! 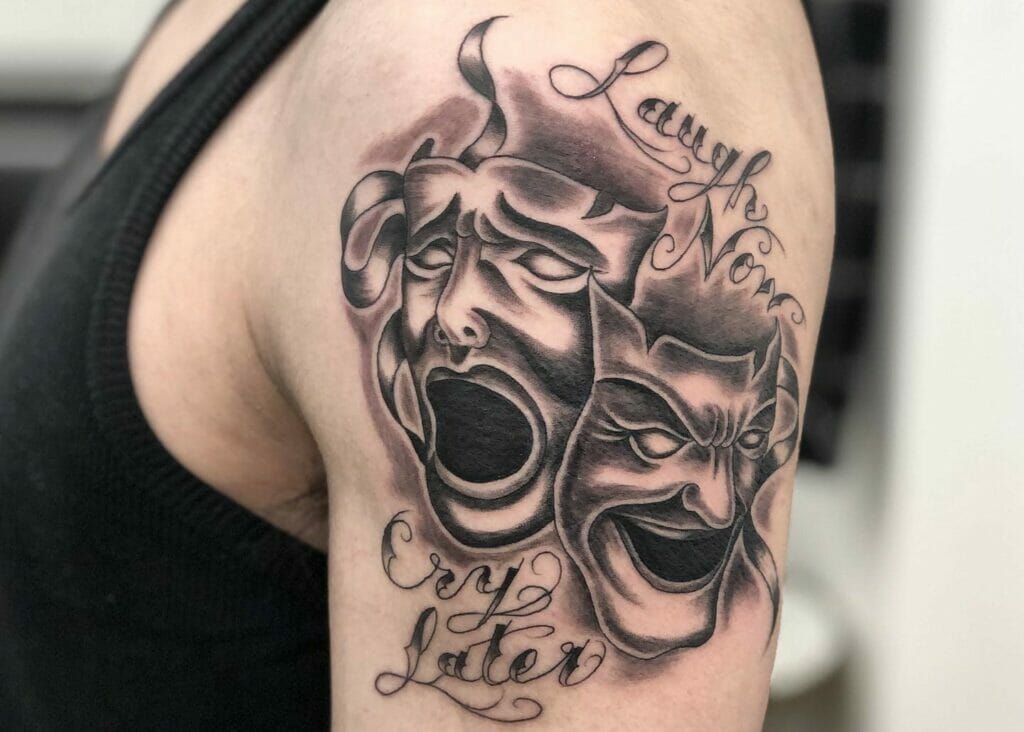 2 face tattoo ideas are quite exciting and can be explained in creative ways. Check out these cool and amazing 2 face tattoo designs.

Two-faced tattoo designs are a mixture of various emotions.

Two-faced tattoo ideas are quite popular among people. The realistic and aesthetic creations of these tattoos are what makes them fascinating.

These tattoos subtly represent the multiple emotions and expressions of a human being. It is always said that every human being has two faces, so these tattoos are an accurate representation of the two-faced flawed human. These unique tattoos not only look aesthetically pleasing but also carry a powerful message and storytelling behind their creation. The extraordinary features of these tattoos lie in the creativity of the tattoo artist and the portrayal of their meaning.

The laugh now cry later tattoo design is the most popular tattoo among face tattoos. At first glance, it is usually taken as yet another depiction of good and bad, devil and angel. If one looks properly, it can have various other meanings and explanations as well. The tattoo design is quite realistic in its depiction as it beautifully explains the phrase ‘nothing in life is permanent, neither good nor bad’. One can laugh now and cry later, but that is how life goes on, so we must go through every phase to learn the real meaning of life. Crying along with laughing is necessary to release your suppressed emotions.

The two masks perfectly depict the happy and sad phases of life. Apart from just being perceived as tragedy masks, one must notice the positive message behind the tattoo that teaches us that we can overcome every phase of life. The two masks also represent theatre artists.

This creative smile now cry later tattoo will make a good choice among people who are fighting depression and eventually losing faith in positivity, so this tattoo on their body will be a symbol of hope and faith in life and god, which can play a part in their healing procedure and can help them bring back their lost smile and happiness.

The two faces sun and moon tattoos, represent the dichotomy of day and night. The wild blazing sun represents energy and stamina, which usually happens during the day when we work hard, while the closed eyes of the moon represent stillness when our body is at rest and sleeps after an exhausting day. This tattoo is a symbol of positivity, new hopes, and new beginnings.

The two faces butterfly tattoo makes for visual pleasure. Butterflies are a symbol of union and happiness, and in this tattoo, a butterfly can be seen connecting two sisters and representing their unbreakable bond.

The zodiac sign tattoo designs are quite popular and creative. Gemini tattoo ideas symbolize duality and two sides of the same coin. The tattoo looks elegant and sophisticated, representing the Gemini twins. The black ink makes it look poised, adding an element of mystery. This 2 face tattoo design will look intriguing on your forearm.

Fairy represents feminity, innocence, freedom, and beauty. This feminine tattoo idea represents twin fairies who are strong, beautiful, independent, and will always be there for each other, as fairies symbolize togetherness.

Siamese twins are physically conjoined since childhood. This face tattoo portrays the siamese twins in a dark and gothic manner, with the twins as witch sisters. It adds to the intrigue behind the history of these twins. The artist’s use of gray and black shades with the use of beautiful flowers adds both mysterious and feminine elements to the tattoo.

This creative tattoo design can be preferred by siblings or female friends who are notorious pranksters or trouble makers or call themselves ”evil twins”. It can also be a good choice among women or girls with a gray and mysterious side in their personality, thus making them more appealing and intriguing to others who want to know more about them.

Constellation tattoos have always been among the most popular, creative, and fascinating tattoo designs. Two faces getting connected uniquely is the new style among tattoos. This beautiful tattoo design portrays two souls born from the same seed and is a part of each other. This one-line two-face tattoo design is beautifully created by the artist with the use of black ink depicting soul sisters and will look stunning on your forearm.

This unique two-face tattoo depicts the two opposite personalities of a human being which are true and false. This face tattoo, apart from looking visually appealing, also has a powerful and poignant message which is subtly created by the artist. Every human being has two faces. On the outer form, everything appears positive and rosy. However, the inner and real form of that same person will be all hurt, broken, and destroyed.

This two-face tattoo is both beautiful and painful at the same time. It carries a powerful message of how in today’s difficult times’ human beings are not allowed to express their true feelings and expose their real side in front of others for fear of judgment. This beautiful face tattoo can be a good choice among people who are forced to hide their real side from the world and wish to indirectly narrate their true story to the world, especially their loved ones.

Japanese manga series and anime are a craze among the public, especially the youth. Among such popular Japanese manga and anime is the horror drama ‘Tomie’ created by Junji Ito. The character of Tomie Kawakami breaks all the gender stereotypes and taboos surrounding lead female characters, who are usually expected to be calm, shy, composed, and submissive, as the story mainly centers around the male lead character. In contrast, the female characters are only second fiddle to the storyline. However, this is where Tomie Kawakami from Tomie enters.

She is ready to surpass all the baseless expectations of an ‘ideal female character’. Tomi is the titular character and antagonist in the series. She is beautiful, wild, mysterious, wicked, selfish, and manipulative. She creates her gangs of clones to lure men into falling in love with her, inducing extreme jealousy in their personalities and indulging them in rage and gruesome acts of violence. She is bold, merciless, and unapologetic for her actions. An absolutely charming face outside and a wicked face inside. She has gorgeous long black hair, and her heavenly beauty is just a tool to destroy men, nowhere related to the actual intentions of her character.

This beautiful manga tattoo creation can be included among the most fascinating and badass tattoos for all girls and women. This tattoo reveals the other side of the woman and explains that we cannot always expect a woman to be good, caring, or submissive, and she can possess an alternative personality as well. Women can get this tattoo inked on their bodies to flaunt their dark, mysterious and badass personalities to the world. Tomie Kawakami’s tattoo can also be a good choice among loyal and die-hard Japanese manga and anime lovers.

The 2 face teardrop tattoo can be interpreted and depicted in various ways. The two teardrops on the face tattoos are mainly remembered in prison or gang culture in the west by people who have a dark past and have spent time in prison for some crime. However, if we observe this tattoo closely, it carries yet another poignant message of a woman’s suffering. The tattoo on the back explains how a woman is forced to hide her painful story from the world and can only weep silently without anyone noticing her. The use of the black watercolor technique by the artist perfectly sums up the dark life of the woman.

This stunning tattoo can be a good choice among women who want to tell their real story and sadness to the world indirectly.

2 face tattoos are really intriguing and powerful in their creations. The use of two faces or masks depicts the two personalities or two sides of a human being. These face tattoos can subtly narrate the mysterious or hidden face of the wearer. They are both beautiful and empowering at the same time. Any tattoo enthusiast can get these face tattoos inked if they, too, want to express their dark and mysterious side to the world creatively. Some more tattoo inspirations for you to choose from: