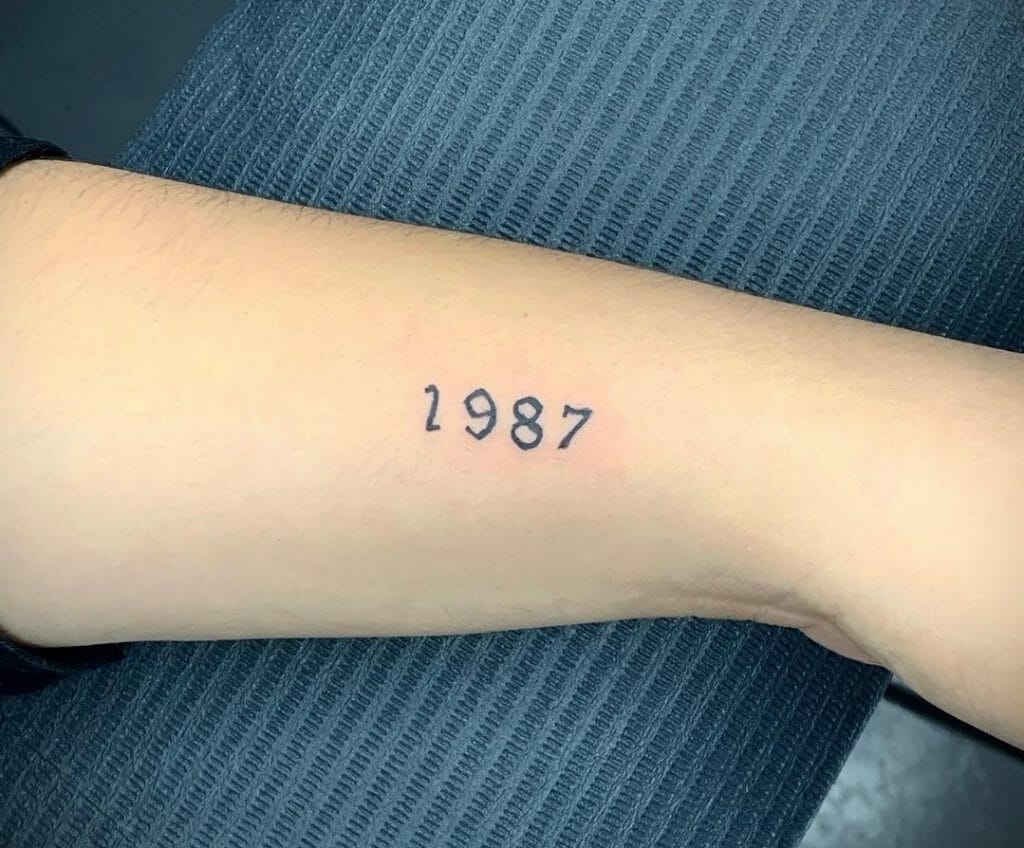 If years are to be tattooed, 1987 takes the front row. Get yourself some fun ideas with our top 1 0 picks on this wonder year and start inking!

Be it your birth year or some distant childhood memory, 1987 has something in store for everyone.

1987 birth year tattoos are popular and have been the prime reason for getting inked. However, being a numeric tattoo, there is not really a lot of out-of-the-ordinary options to choose from.

People get their 1987 birth year tattooed as a way of expressing gratitude and pride in their existence. If you are a go-getter achieving thousands of things in your life, you ought to be looking back at where you started. But why are younger men and women decided on getting a 1987 tattoo? Well, 1987 was a blast of a year with its top-notch contribution to mankind. If you talk music, you have George Michael, Michael Jackson, R.E.M., U2, Pink Floyd, and oh, of course, Rick Astley! Rick Rolling has gone so far that people are getting its QR code tattooed beside a 1987 lettering. Internet trends, we tell you! Bottom line is that getting 1987 tattoos is never a bad idea. Whether you are inking for its cultural impact or something personal, your body is an awesome place to exhibit things that you hold dear. Having said that, here are some designs that you may also like apart from your own creations.

Attaching an est to your 1987 tattoos can go a long way in accentuating your 1987 birth year. It marks the wearer as a bold persona who believes to have control over their own fate and exercises powers accordingly. The bullet holes with drips of blood in this one take the bold image to a badass level. You can also replace est with since and it will work out just fine.

Keep the est intact but magnify the numerals while trying out on different placements. A back tattoo offers plenty of space and liberty for you to go big with your 1987 birth year tattoo. Try out with 2.5 cm width or more alongside some ghastly shading as this one to beautify your skin even further.

This tattoo shows a new window in tattooing fingers that generally feature minuscule and neat designs due to its lack of surface area. The design here may seem like abstract dots in black when fingers are apart but will form a cool show when you bring them together. This unique idea will cut you some slack from the possible mundanity of a numeral tattoo.

Or you can adhere to tradition and revamp it with your taste in body art. The artist incorporates spooky imagery with the crooked lines coupled with dots and shades and is already our Halloween favourite! Add any such creepy symbols to suit your taste and try out several placements for this tattoo.

Nothing beats a classic design with glistening shades to highlight its presence. The artist keeps the design simple and feasible with its perfect size for placing on the chest. Although the shading and mock outlines the core and enhance the overall experience. We would suggest placing more on the back and chest for the skin does not stretch as much as other parts making your tattoo last longer.

This spooky season, cover your tattoos in eerie garb and find them appreciated among your friends. The key here is to play with the lettering so that they seem like something entirely different. For instance, here the number seven is fashioned in the form of a scythe, submitting into the dark zone. You can also craft these tattoos in the form of a prison tattoo or gangster tattoos to arrive at a genre more than numerals.

If you are the kind of person who would like a super-fast 1987 birth year tattoo, opt for smaller tattoos in less quantity. This fine line behind the ear tattoo gets you all the attention among friends and is a cool ice-breaker to kick start a conversation.

A little 1987 birth year tattoo around your ankle might just be the best peekaboo ever. Hide this under your clothes in the workspace without having to compromise on the fun! We would suggest placing these tattoos in the parts of your body where the skin does not stretch quite as much. This would enable fast healing of your skin and add to the joy of the overall experience.

1987 sleeve tattoos are your thing if you love to go all in and would definitely show off your 1987 birth year with pride. Artists like the one here will help to find you a statement design for a couple of hundred bucks while suggesting different placements for the sleeve.

Speaking of hiding tattoos, you may also like a wrap-around tattoo with lesser width near the ankle as a new window to keep your secret. This fashion is much appreciated for the skin does not stretch and your 1987 birth year gets time enough to heal and cast its spell.

1987 Calf Tattoos With A Twist

Split your 1987 birth year tattoo in half and ink on separate calves as is shown here to delve into a unique stream of tattooing. You may keep the design in simple black or include shading to highlight it further.

For those who live by the YOLO code, we suggest placing your 1987 birth year on your neck. Input your est or since and match the stature of celebrities among your friends. This elaborate tattoo stretches from the back of your head to the nape of your neck for a spectacular show of style. Get the lettering in 2.5 cm width for segregating out of the crowd!

1987 birth year tattoos can get a bit mundane if you are submitting to the existing designs. We would suggest you input a temporary version of 1987 first and then decide on the design and quantity for a new window in styling. Having said that, the following are some suggestions on your 1987 birth year tattoo that you may find helpful:

A 1987 tattoo typically symbolizes a person’s birth year, or may have some other personal meaning associated with it. It could be a reminder of an important event or milestone that happened in the person’s life during that year. A 1987 tattoo may also serve to honor someone born in that year, such as a parent, sibling, or close friend. In some cases, it could also be an homage to a favorite artist or musician that released an album in 1987. Ultimately, the meaning of any tattoo is highly personal and unique to the individual who wears it.

Getting a 1987 tattoo is relatively simple. First, you’ll need to find an experienced, reputable artist who can design and create the artwork that you’d like to have inked onto your body. You should also research your chosen artist’s portfolio of work so that you can ensure they’re qualified to do the job. When it comes time to have your 1987 tattoo done, it’s important to communicate with the artist and provide them with clear instructions on what you’d like your design to look like. Finally, aftercare is also essential for optimal healing and to make sure your tatto looks its best in the long run.

The best 1987 tattoo design is ultimately up to the individual getting it. Some popular tattoo ideas for 1987 include a year number, Roman numerals, an outline of the state or country in which you were born, or an artwork with personal significance. You may also choose to incorporate elements like flowers or animals that are meaningful to you, or even symbols that represent your favorite sports team. Ultimately, the design of your 1987 tattoo should be meaningful to you and reflect who you are as a person.