101 Amazing Valkyrie Tattoo Ideas That Will Blow Your Mind! 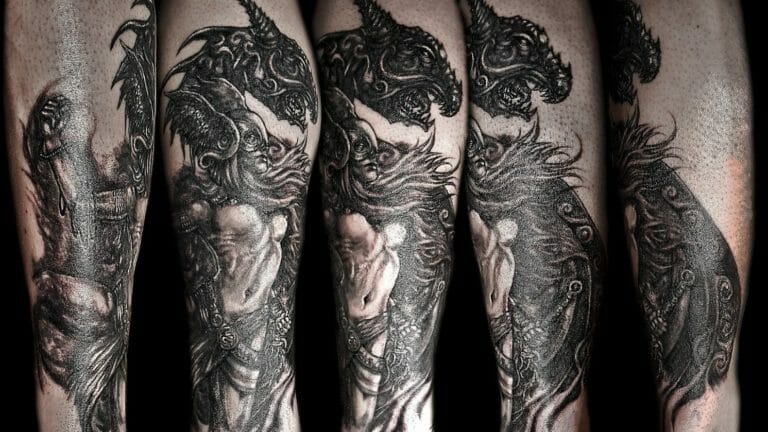 A Valkyrie tattoo is pretty manly and bold on its own. Are you into Norse mythology? Do you prefer tattoos that stand out due to their feminine beauty? Both men and women will love designs such as the Valkyrie tattoos, see your options down below!

What Does A Valkyrie Symbolize?

A Valkyrie stands for smoothing out any negatives in the world and during the war. It also represents a right to protect yourself, your rights, and your principles. If you like this meaning, you will also love our suggested Valkyrie tattoo designs.

This tattoo will look great over your arm. Valkyries and warriors are usually drawn with a pair of wings, and are true soldiers (and angels) in war!

Tattoo ideas that are done in color and similar designs will demand a bit more of your time, patience, & money. Men who like dramatic tattoos and who worship the Norse mythology will want this tattoo.

This drawing in black ink is for men who are into larger shoulder tattoos. If you knew about God Odin and you liked mythology, why not place this duo and combine a Valkyrie tattoo with the Odin? Time-wise, make sure you have 8 hours to spare to get this tattoo design.

If you like the Valkyrie tattoo meaning and you like colors – combine these two worlds. People who like ancient designs and who want a leg tattoo should place this image on their thigh.

Valkyries were brave and they would go into every battle, willing to die for their people. If you want a tattoo that stands for strength and you want one that will cover your entire back, this could be your inspiration.

Men & women who want a cool black & white tattoo should place this real wing image over their leg. A pair of flying wings is a common Viking tattoo, and this beautiful maiden will suit both men & women.

Valkyrie tattoo designs are for guys who are on a search for some women or girls symbols, as well as tattoos that represent femininity and power. If you want tattoo ideas that won’t take too much of your time, give this one a chance.

Valkyrie became pretty popular as a tattoo design among men and women, as well as warriors who were dedicated to fighting their entire life. You might enjoy a larger tattoo if you are not afraid of the needle and if you can spare 8 hours to achieve this Valkryie tattoo.

Valkyrie wings meaning stands for power, bright future, as well as finding your own way. If you live for dramatic pieces and you need tattoo ideas that can act as an amazing sleeve tattoo, this is your Valkyrie!

Lastly, if you wish for tattoo ideas that are bright and noticeable, this is for you. The Valkyrie symbol tattoo meaning is straightforward and mystical! If this sounds like your way of getting a tattoo, stick with this one!

Every man will easily find his perfect Valkyrie tattoo in this article. Choose one of these 11 tattoo designs, and stick to tattoo ideas that are close to your heart, as well as unique.