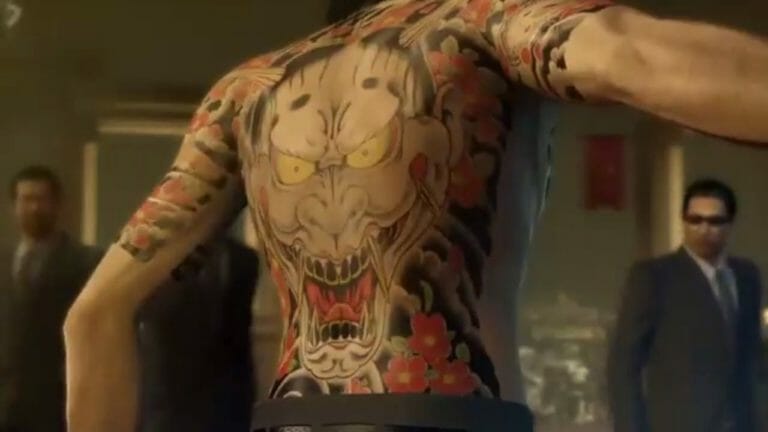 Have you ever wondered what the life of a Yakuza looks like? Well the video game series Yakuza covers exactly that! Any installment you choose is an amazing gaming experience, so definitely give it a go! And you know what else is an amazing experience? Getting one of the incredible Yakuza tattoo designs from the game! While tattoos are generally viewed as bad in Japan, especially due to real-life Yakuza, their artA koi fish tattoo is generally a sign of strength and perseverance is so stunning! So why not get some wonderful ink on your back just like Goro Majima?

Goro Majima is the playable character in Yakuza 0 and an important story character in other games of the series. Love him or hate him, his back is one incredible Japanese work of art! Majima Goro has fully tattooed his shoulders and back down to his knees. Majima tattoo has a simple floral pattern with black and white swirls and clouds intertwined. You can also find two white snakes coming to his head from the shoulders.And then there is the giant Hannya art in the center, stealing the spotlight from Goro Majima himself!

Are Majima and Kiryu friends?

While they didn’t start that way, Majima Goro and Kiryu Kazuma became great friends and allies in the end! But we recommend checking out the game for yourself to see the journey from rival to best friend. We also recommend our top 20 Yakuza Majima tattoo ideas for inspiration found down below!

If you’ve played any of the Yakuza games, especially Yakuza 0, you know how amazing Majima Goro is as a character! And if you loved his gameplay that much, why not get a stylized Goro Majima tattoo? Done almost in a caricature style, this Majima Yakuza tattoo would look awesome as a leg tattoo placement! In the world of tattoos anything and everything goes, so why not this unique Majima Goro tattoo? We know you’re gonna love it till the end of time!

Kiryu is probably the best known Yakuza world character! And if you agree, think of getting this amazing Kiryu with Japanese tattoo elements! Similar to Kiryu’s Yakuza tattoo, this design features a dragon too. Dragons in Yakuza tattoos may be the most popular elements out there! They symbolize wisdom and protection in Japanese culture. So why not combine it with the fearless Yakuza protagonist and create epic Kiryu tattoo designs?

Don’t find colorful tattoos suit your style? How about this insanely good black and white leg sleeve tattoo? Inspired by classic Japanese Yakuza tattoo elements, such as the tsunami and demon masks, this leg sleeve tattoo will look incredible on your body. A wave Japanese tattoo may represent the flow of life, while a demon or oni mask symbolizes the fight against evil. If these meaningful designs sound good to you, this tattoo is the way to go!

One would think fish tattoo designs are straightforward and easy. Not in the beautiful world of tattoos in Japan! A koi fish tattoo is generally a sign of strength and perseverance, as only the most determined koi fish become dragons. A golden koi or carp fish in Japan symbolizes good fortune. And who wouldn’t want tattoo designs which bring that in life?! Get one or two Yakuza style sleeve koi tattoos as a sign of luck!

Women weren’t represented the best in tattoos of Japan. You have the Hannya female demon overwhelmed with envy and now a demonic bloody geisha! While a regular geisha tattoo is a popular Yakuza tattoo design, especially across the entire back, this one is really unique. Geisha are beautiful and artistic women, a sign of perfection. So a geisha turned demon must have had a bad experience casting away her femininity.

Take a look at these two sporting the best Yakuza tattoo designs in the game! Nishiki has a giant koi fish back tattoo, which we’ve touched upon previously. Even the direction the koi swims in has different meaning in Japanese Yakuza tattoos! A black koi fish swimming upwards is a sign of overcoming horrible circumstances and becoming a ‘dragon’. Ironically Nishiki’s ally Kiryu has an epic dragon tattoo! Take inspiration from these two cool Yakuza characters!

Words can’t describe how incredible this Yakuza inspired tattoo is! With so many traditional elements to find in this tattoo design, one may lose its mind! If a samurai fighting a fire breathing demon sounds epic to you, it might be time for a Yakuza style tattoo like this one. Majima Goro would approve too! A samurai tattoo is a sign of discipline and power. A miserable female demon Hannya on the other hand is the opposite of that. What a powerful contrasting symbol!

Horimono refers to traditional Japanese tattoos, often covering one’s entire body. Just remember the Yakuza characters like Majima Goro! These Yakuza tattoos are more like clothing than anything else. Many elements go into one of these, but classic patterns are floral and wave! Waves can be represented by layered concentric circles that also represent surges of luck! Even peony flowers are associated with prosperity and wealth!

Kiryu Tattoo Inspired Design on Back

Not to be confused with Goro Majima back tattoo, Kiryu from Yakuza 0 has this stunning and meaningful dragon tattoo. The image of a dragon grasping a pearl may be a sign of balance in life. While not inked yet in this game, his silver dragon stands for a pure heart. The kanji symbols are the name of Kiryu’s tattoo artist, while the sanskrit stands for monkey – his zodiac sign. Take inspiration and customize this cool tattoo to be your own!

While not the exact Goro Majima tattoo design we all know and love from Yakuza, this black and white one is just as amazing! Featuring a classic floral pattern and Hannya or female demon, this tattoo is definitely up Goro Majima’s alley. You can have additional elements in the tattoos such as a white snake too. Representing immortality, a snake vs Hannya can be a sign of the everlasting battle not to be envious of others.

If our previous Majima Goro Yakuza tattoo was a tad too traditional for you, take a look at this crazy design! Get a modern artistic take on a classic Goro Majima tattoo, featuring David Bowie and a snake! Instead of the envious Hannya demon, get yourself a steaming Davied Bowie centerpiece. Some would argue he is demonic anyways. And if you’re wondering what besides the tattoo style here is Japanese, David is preparing for some awesome fire jutsu, so watch out!

If getting full body ink like the Yakuza is not your style, how about just a giant Hannya tattoo then? The origin of a Hannya theater mask and tattoo design lies in the jealous mistress love story. This is why Hannya tattoos represent female demons too angry and envious to be human anymore. The eyes are an important part of understanding the emotion behind the design. So this one might still be in shock from feeling abandoned.

What is the first thing that comes to mind when you hear samurai? Good virtue men with great skills and discipline, right? The same can be said for the main protagonist in Yakuza 0 – Majima Goro! While Goro Majima is indeed a Yakuza, the story follows his loyal and resourceful personality of samurai-like skills and quality. The very charismatic iconic character sports a traditional back tattoo similar to this one. So be like Goro Majima and get an amazing tattoo!

Can’t decide between your two favorite characters, Kazuma Kiryu and Goro Majima? Get a tattoo with elements mixed from both of these guys! You’re free to question their friendship, but have to admit they have awesome tattoos! Goro has a patterned Hannya tattoo in black, white red and yellows, while Kiryu shows off his dragon holding pearl tattoo. Find the perfect mix of both designs and create your personalized tattoo inspired by Goro Majima!

While not a Hannya demon from the original Goro Majima tattoo, check out this floral pattern geisha design of the same style! A Geisha is this mysterious unattainable woman that can turn demonic if envy takes over her heart. A common flower in traditional Japanese tattoos is either a chrysanthemum or peony. Golden chrysanthemums are considered to bring longevity and greatness in life. You know who else is a man of greatness and determination? Goro Majima!

Goro Majima has that iconic Hannya tattoo on his back! If you’re considering a large Yakuza inspired tattoo like that, you may want to check out this crazy design! A Hannya is a female demon born from a woman engulfed in anger and envy. And you can really see the rage with this one. A completely red Hannya demon is never going to be human ever again! These tattoos can mean several things, but Yakuza love them as a symbol of punishing their enemies.

Trying to find Goro inspired tattoo designs? How about a black Hannya with a floral pattern in the background? Close enough, right? If you’re not ready to commit to a large tattoo like Majima did, be free to get this cool tattoo as a standalone. A black Hannya mask and tattoo represent sorrow that drove a woman to insanity. A Hannya with cherry blossom flowers may signify wanting a better future after tragic life events.

The world of Japanese traditional tattoos is so intricate and full of deep meaning. How does a demonic boy wrestling giant koi fish not sound epic? Majima himself would get this awesome tattoo design, if he had any place left! This boy of mythical strength is often depicted wrestling giant animals, such as this carp. While traditionally choking a black carp, in this rendition a golden koi fish can represent your struggle for gaining success but succeeding in the end!

If you find Majima’s tattoo from Yakuza so cool you want one for yourself, we have just the thing! Feel free to scroll up and down our list of top 20 Majima inspired tattoos! How about this rendition of a snake and Hannya being stabbed tattoo design? A snake with Hannya signifies the immortal fight between controlling your good and bad emotions. And a katana going through the enraged demon is a sign you have full control over your anger and jealousy.

In traditional Japanese tattoos, most dominant colors used are black, white, yellow and red. Stunning tattoos are created by combining different elements and colors, so feel free to experiment! You can always omit some aspects to create a more clean tattoo design. Just like this one is! Hannya masks were used in the Noh theater to depict an envious woman that turned into a demon. But a white complexion signifies nobility. So make of that meaning what you wish!

We hope you find our top 20 picks on Majima from Yakuza tattoos to be inspiring! Even if you never played the game, traditional Japanese inkwork is too gorgeous not to have on your skin! Majima has a large Hannya with a floral pattern tattoo across his back in the game. You can always pick and choose the elements you love and make a personalized awesome Yakuza tattoo!