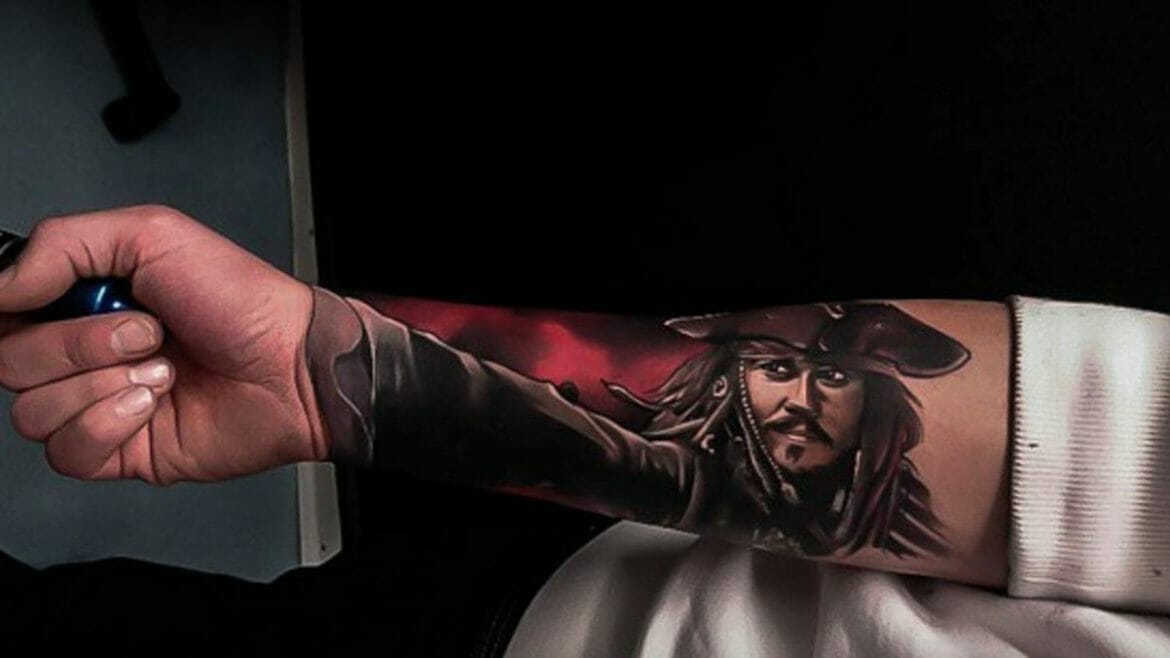 Who wasn’t excited to watch the first Pirates of the Caribbean movie when it came out? Movie theaters all over the world were packed to see this spectacle for themselves. And Jack Sparrow quickly became one of the most popular and beloved characters of all of Hollywood! If you’re thinking of commemorating the legendary Captain Jack Sparrow as a tattoo design, you’ve come to the right place! Check out our list of top 13 Captain Jack Sparrow Tattoos down below for the best inspiration!

Does Johnny Depp have the Jack Sparrow tattoo?

Legend says this award winning actor has 37 meaningful tattoos! Can you imagine having that many ink works? One of Depp’s tattoos is a Jack Sparrow Pirates of the Caribbean tattoo on his right forearm. While having to cover all his tats for the movie, Johnny had fake Jack Sparrow tattoos in movie. Talk about determination! Later on he got a real tattoo inspired by the Jack Sparrow tattoo movie. He explained in this version, the bird is coming towards him and has the name of his son – Jack tattooed below it.

Is Jack Sparrow based on a real pirate?

As far as we know, Jack Sparrow wasn’t based on a real-life pirate nor one single person. Depp took the liberty of giving the protagonist of Pirates of the Caribbean life in his own way. The performance of the pirate trickster was influenced by Pepe Le pew from Looney Tunes and even Keith Richards! The screenwriters shared Bugs Bunny, Groucho Marx and Errol Flynn were influences as well.

Johnny Depp really did an incredible job at portraying the mischievous pirate in the movie! If you loved the rugged character that much, why not ink his lovely face onto your arm? A Jack Sparrow tattoo meaning is really that of you either like him as a movie character or share the same characteristics. If that sounds like you, take a look at this Jack Sparrow tattoo sleeve! Portraits are a tough one to bring to life as a tattoo, but this one is just splendid! The white highlights really made a difference.

What’s your favorite movie of the Pirates of the Caribbean series? Is it The Curse of the Black Pearl by any chance? If so, then you need a Jack Sparrow tattoo sleeve right away! You have to admit Jack is an amazingly written character. The screenwriters described him with one word – the trickster. Perhaps you’re a mischievous person yourself or are just in love with our captain here. Either way, a black and gray tattoo with his charming face on it is literal art. And don’t forget to add the iconic Medallion either!

What makes a pirate ship captain formidable? Is it the dark circles under his eyes or the braided beard? Whichever might be – a tattoo of Jack Sparrow is the true answer! Take a look at this forearm portrait tattoo of the handsome pirate! Done in black and gray with white highlights, it really brings all the facial features to focus. We find this Jack Sparrow tattoo is perfect for an arm and thigh placement too. So just go for it!

How gorgeous can a portrait tattoo get? Apparently very much so, when Jack Sparrow is on it. If you find yourself searching for new tattoo ideas and have stumbled upon our site and top 13 list, it must be a sign. A sign to get an awesome Jack Sparrow portrait tattoo that is! Even in black and white, this Jack Sparrow tattoo looks so realistic and life-like! Designs like this one are ideal for larger surfaces such as the thighs or even as a Jack Sparrow back tattoo!

Looking for insanely good Jack Sparrow artwork to tattoo on your skin? Well look no further than this incredible full color portrait fit to be a print in the History Museum too! Going for a more painterly approach, the likes of this Jack Sparrow tattoo are fit for artists and avid fans of the series! Get it done on your biceps or thigh at the best tattoo artist shop you can find. A Jack Sparrow portrait art will surely decorate your skin like no other! We promise you won’t be disappointed.

What were your feelings when Disney bought the rights to Pirates of the Caribbean series? Were you excited for the new theme rides in Disney parks? Are you on the search for unique and colorful Jack Sparrow tattoos? Then we have the perfect tattoo idea for you! Check out this stylized fun rendition of the classical character!  Bright colors will pop on any skin tone, so don’t worry about that. Customize his pirate hat to bear the Black Pearl ship sailing away in the beautiful sunset.

Are you still not sick of amazing portrait Jack Sparrow tattoo design? Good, because we have so much to share for your inspiration! Jack Sparrow art has boomed since the first movie – Pirates of the Caribbean: The Curse of the Black Pearl aired. And who could blame them? If you’re a fan of the series and works of this trickster pirate, get a Jack Sparrow tattoo. This watercolor ink wash style gives off a more 18th century art vibe, like something an artist would make on the Black Pearl! So why not get it tattooed anywhere you wish on your body?

Nothing like a pirate captain and his dear ship tattoo design to scare away the competition! Did you know, a pirate ship tattoo is a symbol of freedom too? The feeling of sailing away and looking at nothing but the horizon on open seas would scare some, but not all. If you’re fearless, resourceful and love to have fun like a pirate, get a Jack Sparrow tattoo! The scene where someone steals his precious ship was so hilarious. Don’t be like Jack and don’t forget to add the Black Pearl to your tattoo design!

Have you ever seen a more unique looking Jack Sparrow tattoo design? Us neither! The details and execution of everything on this artistic Jack Sparrow tattoo art is insane! Who needs a face when you can carry the most beautiful tropical image on it instead. So pick your favorite scenery from the movie and add it to the face. Sorry Jack, you’re handsome, but a calming island scene wins this fight. Don’t forget to bling up our pirate and add expensive jewelry everywhere you can!

Doesn’t this dramatic gaze on Jack Sparrow just pierce your heart? Are you drawn to his magnificently written character and charm? Then it’s a sign you need a Jack Sparrow in your life! If you want to show off your new tattoo, we suggest a shin or biceps placement. But we find a more intimate position, such as the back is also cool. Jack Sparrow is such a popular Hollywood character, so you’ll have people flocking over to see this awesome tattoo! Add the formidable Black Pearl ship to the bottom, so you don’t have to search for it as Jack did.

Who says you can’t have fun with a Jack Sparrow tattoo? We all know how this popular character looks and acts, right? But a tattoo design needs to be unique, personalized, something you’ll proudly wear on your skin forever! So get creative and go nuts inspired by this colorful watercolor Jack Sparrow tattoo. If you’re an artistic person yourself, this tattoo idea is especially made for you! So call or email a tattoo shop right now and finally schedule that appointment!

We’ve saved the best for last! Just take a look at this insane sleeve tattoo of our favorite pirate – Jack Sparrow! This is why we here love white ink for highlights. Nothing makes a tattoo more lifelike than some realistic highlights and shadows! The scar on Jack’s left eye looks almost as cracks in the stone, truly a cursed sight. If you love this character as much as we do, consider getting this incredible Jack Sparrow tattoo design as a sleeve or full back tattoo!

We hope you had the best experience scrolling down our list of top 13 Jack Sparrow Tattoos. If you weren’t inspired to get an awesome Jack Sparrow tattoo before, now you surely are! Whether you loved his character, Johnny Depp in the role or just the movie plot itself, getting a Jack Sparrow tattoo is a great idea. From back to sleeve designs, this iconic character will most definitely find a way onto your skin! So who was your all time favorite Pirates of the Caribbean character? Was it Captain Jack Sparrow? Tell us in the comments section down below!