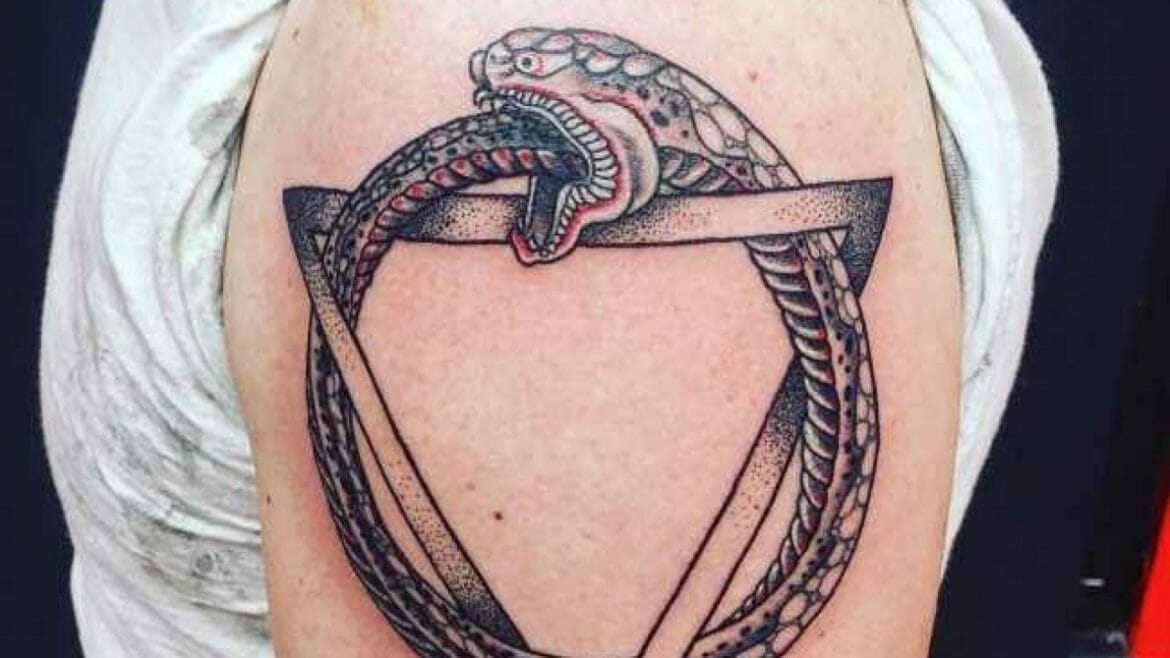 If you watched Fullmetal Alchemist anime while it aired, you had the best experience! The characters and valuable lessons this show gave us could make any stone-cold person cry! And we’re not even gonna mention THAT scene either. If you’re looking for some awesome Fullmetal Alchemist Homunculus symbol tattoos, you’ve come to the right place! Check out our list on top 6 homunculus tattoo ideas to get down below!

What does the Homunculus symbol mean?

In this fictional world, Homunculi are humans artificially created through sinister alchemy. They serve as the primary antagonists of the manga. Six out of the seven Homunculi are branded with an Ouroboros symbol in different locations. The winged serpent eating its tail encircles a hexagram creating the famous FMA Ouroboros tattoo we all know and love. The meaning behind the symbol is associated with human creation and infinity.

Which Homunculus is the strongest?

The Homunculi share an Ouroboros symbol in the show. They are marked with it as an Homunculus is a humanoid creature created by using forbidden alchemy. Homunculi are also referred to as ‘sins’ and named after the seven deadly sins, being: Pride, Lust, Greed, Gluttony, Wrath, Sloth and Envy. One would argue that Pride is the strongest of them all, or at least the most disturbing members of Sins. He is the only one without a Homunculus Ouroboros tattoo.

Pride is just an awful character, isn’t he? His arrogant attitude towards non-homunculi is just another sign that his sin truly is pride! While he doesn’t carry the traditional Homunculi symbol anywhere on his body, his shadow attack with red eyes is still iconic. And if you happen to like some of his traits or at least his awesome attacks against Edward, get this Fullmetal Alchemist tattoo design! Ideally fit for pecs and biceps placement.

Loved the anime so much, you’re thinking of getting some new ink work to commemorate the fandom? Then how about a classic black ink Homunculus sign tattoo? Any fan of the show will like this tattoo design! A dragon eating its tail surrounding a hexagram is not just a symbol of alchemy and creation, but also infinity. It is said if the dragon lets go of the tail, all hell would break loose. So instead of waiting for the end of the world, consider getting this anime tattoo today!

Is this the manliest Fullmetal Alchemist Ouroboros tattoo you’ve ever seen? You have the beautifully shaded metallic Homunculi symbol, the Philosopher’s Stone and some sign of transmutation going on. We find the combination of black and red ink with white highlights always looks the best. Ideal for a forearm or even thigh placement, make everyone jealous by creating a post of your new awesome Fullmetal Alchemist tat!

If you’re in need of great FMA Homunculus tattoo ideas, you’ve come to the right place! While Greed Homunculus tattoo is located on his left hand (also a cool placement idea), Lust has one on her upper sternum. If that’s too painful of a tattoo position for you, why not get her entire character tattooed on your arm instead? Anime sleeve art will never be out of fashion and any tattoo shop will gladly do it. And be ready for the best comments about your new tattoo!

Now isn’t the coolest Fullmetal Alchemist Homunculus tattoo you’ve ever seen? Nothing screams more masculinity than a tattoo ripping skin design. Even better if you’re a passionate FMA fan! You can tattoo this spectacular Ouroboros tattoo design anywhere on your body. But we find the best place for it is a large muscle. The fact this Homunculus tattoo looks so realistic is actually insane! Gather information on the best local tattoo artist and go for it!

Not sure anyone wants to be branded a sinful artificial human, but you do you! That’s exactly why we’re here to give the coolest ideas on Homunculi symbol tattoos! While none of them in the show have the mark in a position like this one, we think this circular design is perfect for a near the elbow tattoo placement! Go for a bright red ink, especially if it’s a color suited for your skin tone. We can’t wait for you to post about it in the comments down below!

We hope you liked our top 6 picks on Homunculus FMA tattoo ideas! Fit for any metal alchemist and a fan of the series, their symbol is an iconic tattoo choice for sure. While you can’t play around with the design that much, change up the tattoo between manga and anime renditions of the symbol. You can also get these ideas in different colored inks or even gradients! The anime community will surely be jealous of your choices! So what are you waiting for? Call or email your tattoo artist and get the Fullmetal Alchemist tattoos you always wanted!