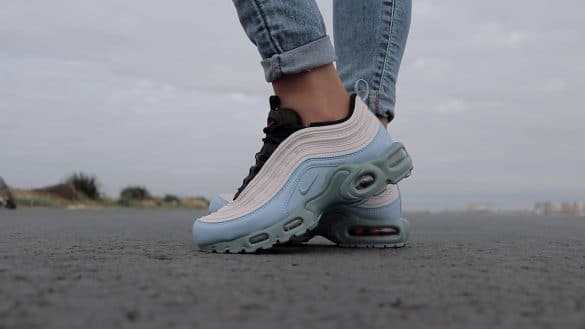 Earlier this week we covered the recently unveiled Air Max 97/Tn Hybrid, however now the tables have turned and this hybrid has been reversed. Nike has fused a Tn upper to a 97 sole, and it’s also a stunning looking silhouette.

So shortly after the hybrid shoe featuring a 97 upper and a Tn sole was previewed, Nike have also released images of this reversed version – and it appears that the two will be releasing in a pack together. The new sneaker follows the same colour scheme as it’s counterpart, keeping it nice and simple with a black upper and white midsole.

The Tn (or Air Max Plus) upper is a favourite amongst sneakerheads, probably due to it’s sleek construction and futuristic looking exo-skeleton. The Air Max 97 sole is also a fan favourite – the completely visible air unit was revolutionary back in it’s time, and it still manages to turn heads now. Much like it’s counterpart that we covered earlier this week, the two sneakers come together to form the perfect hybrid, almost as if this was a brand new silhouette, and not a mash-up of two different models.

If you want to get your hands on a pair of these hybrids, or their counterpart model, they’re set to release on November the 21’st, so you’ve got a little wait yet. Expect a limited release too, launching via Nike and select retailers only.