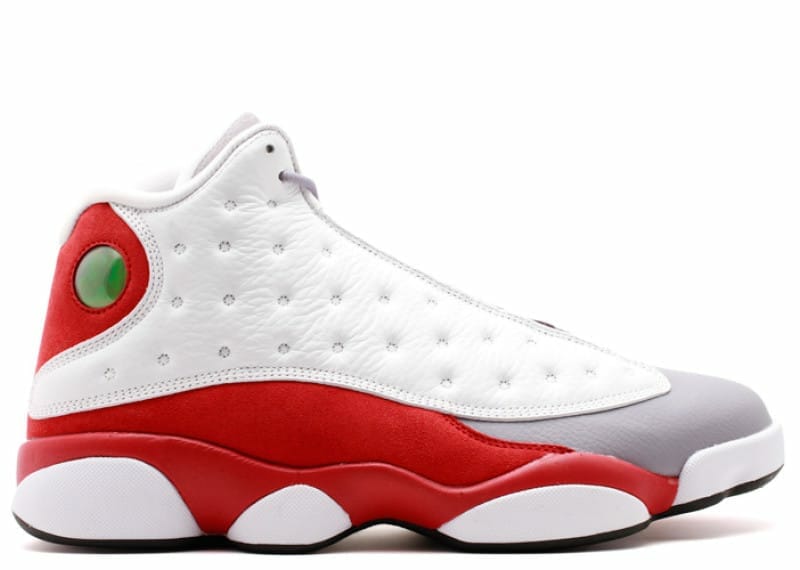 Those with long memories and piles of Japanese shoe magazine back issues will know all about the mysterious Air Jordan XIII ‘Grey Toe’ edition. When this model’s rollout began in 1997 through to 1998 we got seven colourways, yet that grey forefoot edition never made an appearance. Some prototypes should stay in the cupboard, but we’d argue (and we know that the argument would be heated) that this might be one of the very best 13 makeups. In a way, this model has been out before, with an official debut in 2005 (and worn by Jason Kidd for an excellent Nets/Knicks game), but the omission of a matching grey tongue made it look a little strange, so consider this the first real ‘Grey Toe’ reissue. We’ve seen some weak XIIIs lately (those 3Ms just didn’t do it for us) and we believe that Tinker Hatfield and

Mark Smith’s creation deserves to be treated with a little more respect. There’s something about Flint Grey and this model that can’t fail, and while quality ain’t what it used to be with this one. it’s not abominable by any means. Looking through the vaults, there’s a whole lot of unreleased things we’d love to see retroed, but Jordan Brand get points for doing this one justice — one possible change here (and we’re going by old imagery) is that the source material seemed to have the suede-over-Phylon matt feel on the midsole (though a recently unearthed GS sample didn’t) and this has paint. These will be online this Saturday in limited numbers.