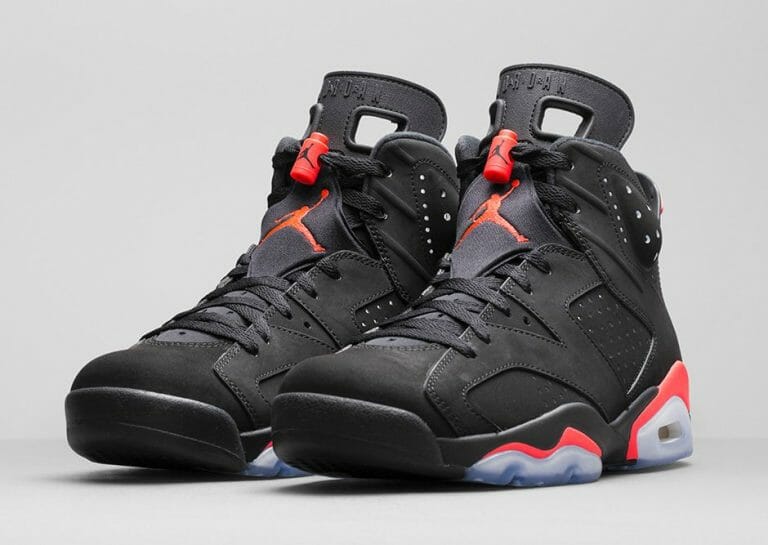 In 23 years, the Air Jordan Vi has been released four times in its black and infrared OG 1991 palette, alongside numerous homages that trade the red for something else. It’s just long enough between gaps to send us into panic buy mode. There’s good reason for that too — this model is a perfect shoe, with just the right balance of insanity and accessibility from the mind of Tinker Hatfield. With its Porsche-style spoiler and an answer to Michael Jordan’s demand’s for a plain toe when he looked down (something that would define the line from the VI onwards), as with the VI, even the lace locks are iconic. Many on these shores tapped out after this one, disappointed by the end of Visible-Air (not us, incidentally), but this one seems to strike a chord with a lot of people. We’d love to see all the tie-in apparel reissued too, but even on its own there’s always room in our cupboards for the neoprene Dynamic-Fit tongue, pull loops and the cylindrical outsole traction. In 1991, a lot of us got them and annihilated them. In 2000, we recall a decent reissue hanging around in Foot Locker at a hefty price. 2010’s edition dropped during the ascent of Jordan retro mania and sailed out, looking similar to the last version bar the lack of NIKE AIR and a switch in materials to a cheap suede from the original synthetic Durabuck (what happened to the glossier material around the heel on the OG though?).

One key thing that’s been lacking during the last two drops has been the 3M underlay, visible through those perforations — we had it back in the day, but someone decided to stop us getting too reflective (we never knew why it was omitted on some XIII bring backs too). This time it’s back, making this a worthy reissue (we still wish they’d lose the heel Jumpman though). Some Jordans, like the VII haven’t been brought back with the love and respect that they deserve, but this is no bad effort. This is the kind of shoe that causes flashbacks in anyone that came in contact with it back in the day, and that Kanye co-sign seems to be causing even more fever, but we still think it’s a perfect creation. Still, it’s a damn shame that someone decided that the smaller BG versions (which should fit many female feet) didn’t deserve a 3M application, but who are we to question the scattershot approach that Jordan Brand applies to recreating their archive pieces? These will be in the store tomorrow in limited numbers, priced at 135 pounds in adult sizes. And in half a decade’s time, we’ll probably be selling them all over again. There’s an argument for making sure that a handful of staple Air Jordans should always be in production to limit the carnage each time there’s a limited (limited that is if a run of hundreds of thousands constitutes limited), and we think that these warrant a place there alongside black and cement IIIs or black and red Is. Classic material.

Where to buy a pair of Jordan 6 Retro Black Infrared