The neutral trainer with a dramatic finish – we give you all the info on the Air Jordan 7 Bordeaux.

It’s not often that trainers have surprises, but looking side on at the Air Jordan Bordeaux 7s with its grey and black colour way, you’d immediately think it was pretty bland and muted, with minimal detailing. Turn it around however, and you’d be surprised by its colourful tongue and accent. This is a trainer that’s not what it first appears, and has been loved by Air Jordan fans since its original release in the early 90s.

Because of the striking colour contrast between the grey and black body and the bright tongue, the Bordeaux 7 is probably the most noticable out of the Air Jordan 7s. The colourful streak down its middle, balanced out with the more muted sides gives it a sleek, centred finish, with the zigzag of colours peaking out through the black lacing.

The smooth, fluid lines of the black outer encompasses the Air Jordan logo on the side of the shoe, and the tongue features a bold Air Jordan text in a silver thread, the Air interspaced between the Jordan and giving it a stylised, punchy finish. The back of the shoe features a V-shaped 23, with the sole taking colours from the tongue and dispersing them amongst the black rubber. 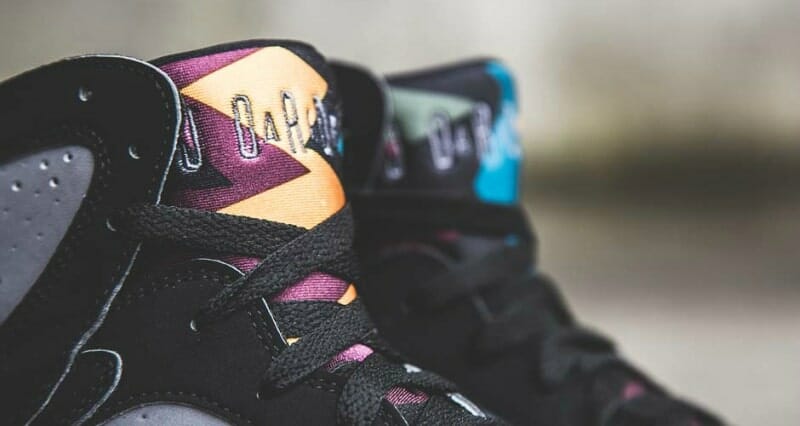 Set on creating a new Air Jordan, Tinker Hatfield sat down with the icon himself and discussed the vibe of the design. Jordan stated he wanted the shoe to “stay young and interesting, while remaining sophisticated”, while Tinker was set on using Nike Huarache technology to ensure a secure fit. He went away with the clear rubber sole and opted for a solid colour one instead, as well as getting rid of the visible air unit and keeping things streamlined and sturdy.

While in a trip to Portland Tinker came across a African art poster, with the image of a man playing a guitar in the shape of Africa. The striking visual look helped inspire the bold pop of colour in the trainers, especially with the more muted Bordeaux Jordan 7s. 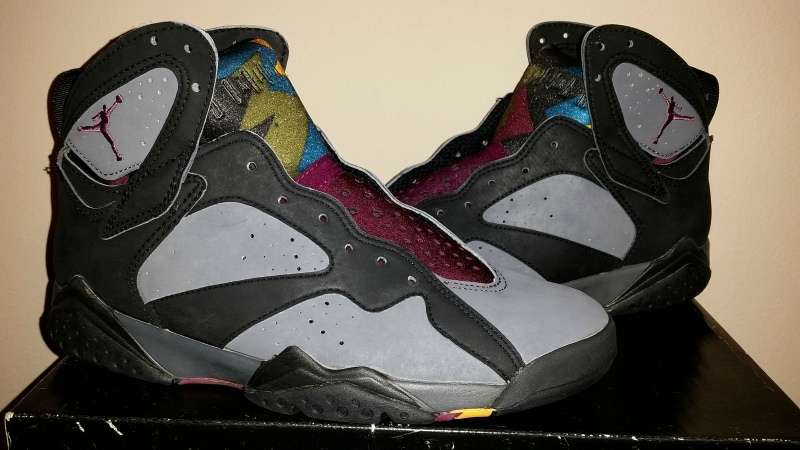