The Air Jordan sneaker franchise has been at the forefront of sporting innovation and style for over 30 years. Nike are constantly re-realising their retro designs with new and innovative colour-ways. Here’s all you need to know about one such re-release, the Air Jordan 8 Retro white/orange blaze stealth trainer.

Nike originally released the Nike Air Jordan 8s to coincide with the 1992/1993 basketball season in America. The main designer of the shoe, and one of Nike’s most famous and influential designers, Tinker Hatfield decided to not include the iconic Nike tick on the trainer. This was due to the fact that he thought the Air Jordan brand had become large enough in its own right. When he originally pitched the idea to his bosses at Nike, they dismissed the idea. However, after a bit of persuasion, he got his way, and no Nike tick features on the shoe. 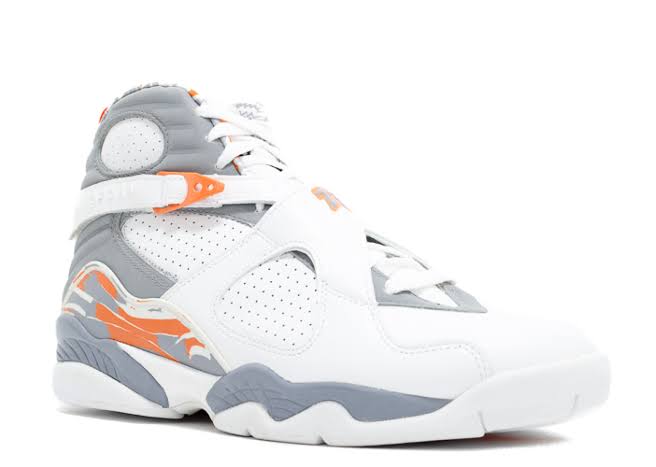 The Air Jordan 8 is undoubtably also one of Nike’s most adventurous designs for an Air Jordan sneaker. With features such as the anti inversion cross straps on the front, also known as bunny ears, the shoe contained a lot more detail than previous Air Jordan trainers. The Air Jordan 8 also caught peoples attention for the exciting colour-ways it originally came in.

On its original release, the Air Jordan 8 came in three different colour-ways. These colour-ways were, white/black-true red, black/bright concord-aqua tone, and black-black-true red. 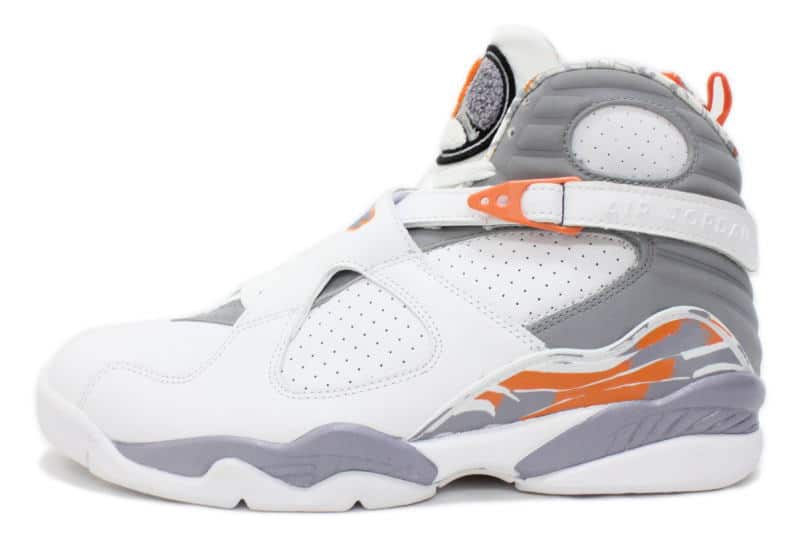 The only downside of the of the Air Jordan 8s was that they were reportedly less comfortable than previous Air Jordan designs. This was in part due to the extra design features that the Jordan 8s had on them. For instance, the bunny ear straps made the sneaker narrower than previous styles, meaning they were less comfortable for people with wider feet. Additionally, the Air Jordan 8 was noticeably heavier than previous designs, and hence became known as ‘the punisher’. Due to the extra ankle support and improved grip, the shoe was seen as being more durable and could take more punishment than other Air Jordan shoes.

The actual shoe design of the orange Blaze 8s remained more or less identical to the original Air Jordan 8s. However, it was the unique and defining colour-way that made the white and orange Jordan’s so popular. As is pretty obvious, the Jordan 8 Stealth came in a three way colour-way. The mid sole and heel came is in stealth silver with and white and orange blaze upper. 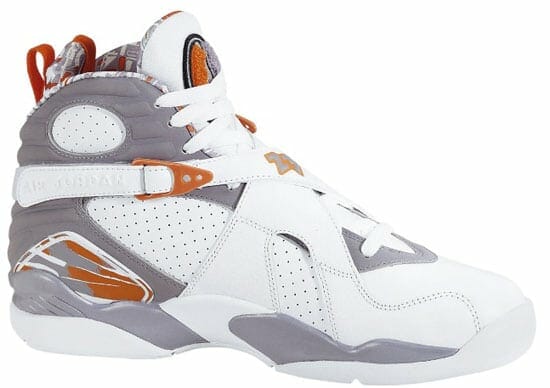