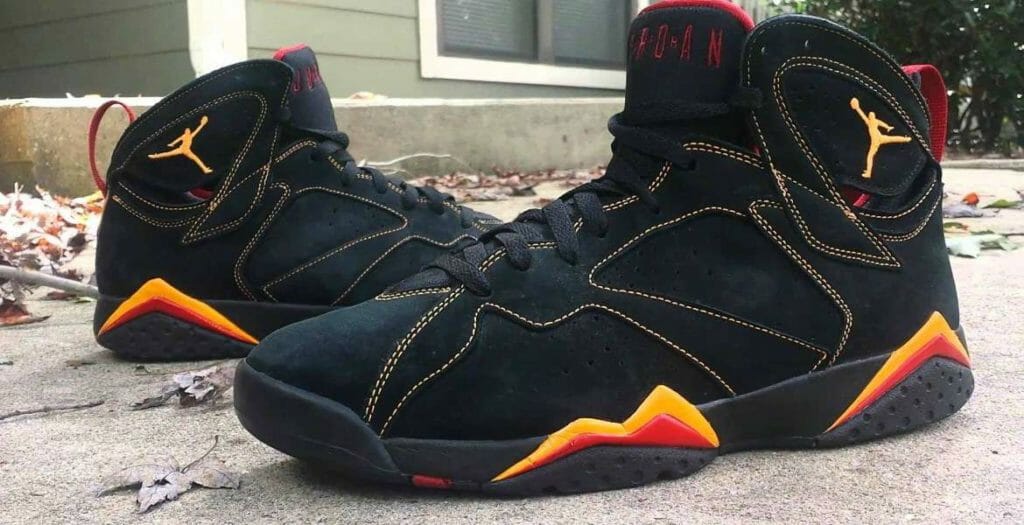 Looking for the ultimate addition to your collection of Air Jordans? You don’t want to miss out on this key number from the Air Jordan throwback collection.

With this pair of retro Air Jordan citrus 7, you’ll definitely hit all the right autumn hues. Designed by Air Jordan master Tinker Hatfield, this revamp of the legendary model aims to be “young and interesting, whilst remaining sophisticated”. As it always is with Air Jordans, their original purpose was to be the ultimate athletic sneaker on the basketball courts. However, their potential doesn’t end there. These trainers play a fundamental part in the the urban landscape of streetwear. Sneakerheads and Air Jordans will always be inseparable.

These kicks are an absolute steal and definitely worth scouring every corner of the internet for. Originally released in 1992, this pair was brought back to life in 2006. Michael Jordan won the 1991-92 NBA Finals championship with these bad boys on his feet so expectations are high. MJ was also awarded the title of Finals Most Valuable Player for the second consecutive year. We like to think that these Jordans played a big part in Mike’s successful streak. This pair is certainly infused with some great basketball history.

And right when you think that the Nike Air Jordan 7 can’t possibly get any cooler, you’re in for another sprinkle of sports magic. Michael took the Air Jordans to new heights of glory in the 1992 Barcelona Olympics. Before then, NBA players weren’t allowed to compete in the Olympics but 1992 revolutionised the basketball competition and MJ gained his first Olympic Gold Medal rocking a pair of Air Jordan 7 in the Olympic colourway.

The softness and textural richness of suede 2006 model definitely gives that sophisticated touch Mr. Hatfield was going for when designing the citrus 7s. We can unquestionably say that the Nike Air Jordan citrus 7 are a key sneaker Holy Grail. With the smooth finishing touches of the red and yellow stitching, you won’t be able to pass on this hot variation of the timeless Nike Air Jordan 7 Retro Series.