The Adidas Superstar Run DMC Trainers – All You Need to Know 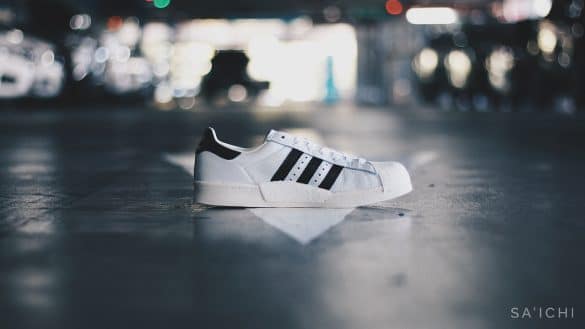 It’s the original Hip-Hop trainer collaboration that impacted how we see the relationship between music and brands. This is our guide to the Adidas Superstar Run DMC.

Run DMC and Adidas knew created an instant classic in 1986. If you don’t know about the Superstar already, or you’re a Run DMC fan, we thought it was about time we took a closer look at one of Adidas’s most loved trainers.

This shoe was born when thousands of fans held up their sneakers in Maddison Square Garden in New York and Adidas realised how important their connection to Hip-Hop would be. They ended up with a $1 million endorsement deal, unheard of at the time, but it shows the influence that Adidas believed Run DMC had on youth culture. They were re-released in 2011 as a 25th anniversary special and the hype around them showed they’re still loved by sneaker heads the World over.

The Adidas Superstar is one of their most iconic designs, it’s been manufactured since 1969. Unless you’ve been living in a cave for the last few decades, Run DMC were a collection of Joseph ‘Run’ Simmons, Darryl ‘D.M.C.’ McDaniels & Jason ‘Jam Master Jay’ Mizell, they’re one of the most influential Hip-Hop collective of all time. They were already well known for wearing clothes on stage that they would wear on the street, so Adidas was a major part of their look. These 2 massive brands collided to create a Hip-Hop take on a classic Basketball trainer.

It’s the history that surrounds this shoe that makes you appreciate it as iconic, the Adidas Superstar Run DMC opened the door for rap and street brands to combine. They used the iconic adidas look to create a trainer that people are still desperate to get hold of decades after it’s release. If you’re going to wear them right take out the laces and push up the tongue to emulate the legends.

Where to buy a pair of Adidas Superstar Run DMC