Adidas Stan Smith Trainer – All You Need To Know 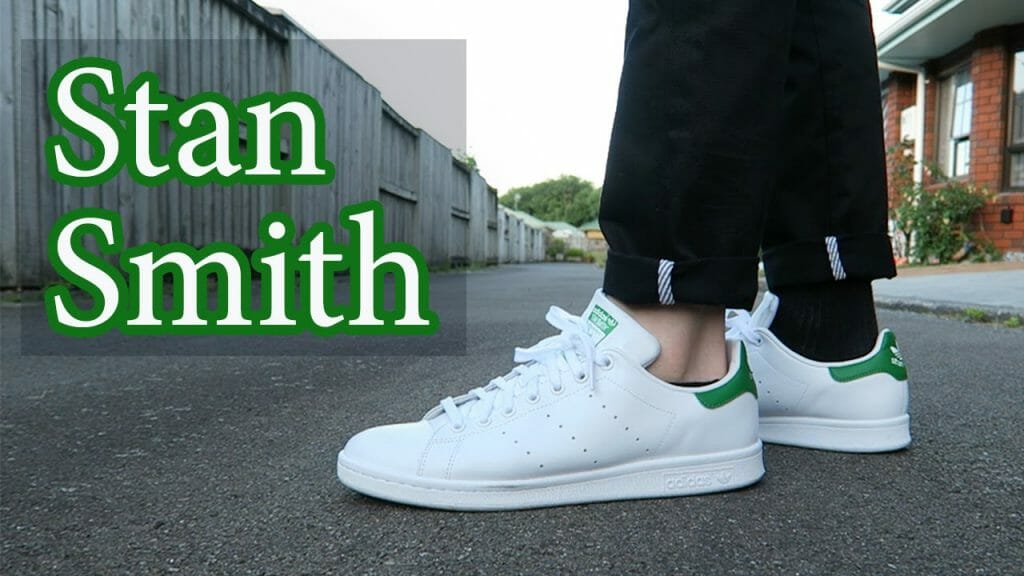 From being used at the tennis courts, so now being acceptable as smart casual attire, the Stan Smith has come a long way. Here’s everything you need to know about this timeless classic.

It’s hard to imagine this shoes being worn by anyone other than the trainer obsessed or those working in fashion. Coming from a fitness background, the Adidas Stan Smith men’s shoe is a slick classic who has had a major revamp. Here’s everything you need to know.

From the renowned green heel to the Stan Smith Adidas tongue logo, this trainer has been around for years. Making it’s way into the mainstream via high end fashion, the Stan Smith is a classic and staple in the trainer archive and Adidas Originals Stan Smith vintage list. One of the first leather tennis shoes, this shoe has steered away from sport and is now a fashion mainstay.

Son of Adolf Dassler, founder of Adidas, had the idea of the first leather tennis shoe, offering more support than the standard canvas style. It was originally named the “adidas Robert Haillet” after the French tennis professional Robert Haillet. When Haillet retired from tennis, Adidas and Horst Dassler decided to find another tennis player that could endorse the tennis shoe model. For a while, it came under both names until 1978 when it was officially called the Stan Smith.

Signing a contract with Adidas, American tennis player Stan Smith won the Wimbledon final in 1972 against against Romanian Ilie Nastase wearing these green and white Adidas legendary shoes. Since the originals, we’ve seen a variety of colours and shapes, but nothing compares to this Stan Smith tennis player classic. The Stan Smith is now Adidas’ best selling sneaker of all time.

And it wasn’t just a case of success on the tennis court for the Stan Smith. By the mid eighties and into the early nineties, the trainer had become so popular that it was entered into the Guinness World Records having sold over 23 million pairs. So what was it about their design that made Stan Smith’s so covetable? Their simple design is pretty unrivalled in the trainer world, and perfectly bridges the gap between sportswear and fashion’s contemporary obsession with all things streetwear.

While their popularity was well established when they were first released, our love affair with Stan Smith’s only really hit mainstream fashion in the last couple of years, with celebrities and designers alike regularly spotted wearing the trainer. With the Stan Smith fully embraced in the luxury fashion market, it’s no surprise that other brands have tried their hand at recreating the simple yet iconic design – look no further than the likes of Common Projects and Acne Studios.

Although the all white with green accents is the original, the Stan Smith trainer is so versatile that there’s no reason why you shouldn’t mix up your wardrobe with a couple other variations. If you’re looking to mix things up, then the all black Stan Smiths is a great alternative keeping your look young and fresh. It still has the same design as the originals, but with a slick black colour. These work really well if you want more of a subtle trainer for occasions when a slightly smarter look is more appropriate.

The original Adidas are in leather, but make things modern by choosing a suede Stan Smith sneakers option. Granted, they’re not as easy to take care of as wipe-clean leather, but you can’t deny their aesthetic appeal. The all over suede look smartens things up, and gives a more put-together streetwear look that’ll serve you well throughout the work day and into the bar in the evening.

With such a wide range of colours, there’s one to suit everybody’s needs – you could make a statement with a bold tone, but we recommend going for a darker tone to keep things more wearable (and will ultimately hide those scuffs and dirty marks better).

If green isn’t your shade of choice, then opt for Adidas Stan Smith white for a slick clean look. The only difference is the white heel and logo. The all-over tonal look is actually pretty rare, so will add an interesting touch to your outfit that’ll even get a double take from seasoned sneakerheads. There’s also a plethora of colour and texture variations on the heel tab, including pony hair and metallic tones – there’s almost too much choice, so you might have to get a pair per outfit.

The question is, who’s really got time for laces? If tying the perfect bow is just too much effort, go for the velcro version of Stan Smiths. You might think they’re a little too reminiscent of school P.E days, but they’re actually a really cool alternative to the norm and are super easy to pull off (physically and in the style stakes). These ones also come in a variety of colour ways, and are just as easy to style as the originals.

Stan Smiths aren’t exactly illusive, and you’re likely to pass a couple pairs walking down most streets. So if you’re after a slightly more exclusive, high end feel, then check out Adidas’ collaboration with Raf Simons. A firm favourite amongst celebrities and the fashion elite, Raf Simons interpretation of the Stan Smiths make subtle tweaks, adding a little ‘in-the-know’ touch, but keeping the original charm that made the trainer so iconic.

With a perforated R in the place of the usual three stripes, the Adidas Raf Simons Stan Smith is the definition of contemporary cool, and again comes in a huge variety of colours. While they might be aesthetically similar, the trainers definitely don’t have the same price tag, so expect a heftier hit to your wallet if you do go for the exclusive collection.

Adidas has got quite a history of collaboration, and it seems one of their firm favourites to work with is Pharrell Williams. After a pretty successful run of Superstars, the artist turned his hand to the Stan Smiths – and they’re not short of his signature bold aesthetic. Featuring huge graphic polka dot prints all over the trainer, Pharrell added a whole new dimension to the Stan Smith.

The upper keeps a slight hint of the original design with a leather upper, and was made in three colour ways – black, red and navy. They’re definitely a statement, but if you’re after an alternative take on the classic shoe, you can’t do much better than these bad boys.

So not all collaborations are with designers or artists – some are slightly more unusual. Back in 2014, Adidas came together with the cult US animation American Dad to produce their interpretation of the iconic Stan Smith. The cartoon character took the place of Stan Smith himself, with his image embossed in original green accents on the trainer’s tongue.

Side note: If you haven’t worked out why yet, the character and tennis player share the same name – duh. These might seem more of a novelty buy, but the subtle tweak is actually a really nice addition to your wardrobe, and definitely a conversation starter.

Styling a pair of Adidas Stan Smith’s literally couldn’t be easier. They’re not too sporty, and their minimal aesthetic means that they can be worked into pretty much any outfit with ease. If you’re going for the classic white pair, you can afford to be a bit more out there in your outfit choices, but there’s nothing cooler than wearing Stan Smiths with and understated t-shirt and dark jeans combo.

But if you’re after a fancier variation of the iconic trainer, such as Pharrell’s offerings, simple is the best bet. Avoid colour clashing and go for neutral tones throughout your outfit and let your contrasting sneakers do the talking. However you choose to style them, Adidas Stan Smith men’s trainers are an easy on-trend option this season.

There’s not many trainers that have reached iconic status, but the Stan Smith is definitely up there. Their minimalist aesthetic stood out amongst the super sporty styles back then, and Adidas Stan Smith’s street style prominence is still raging today. Other brands have tried to recreate the understated coolness of Stans, but they’ll never be quite as good as the originals.

Where to buy a pair of Adidas Stan Smith