ADIDAS ORIGINALS ZX FLUX: THE 8000 GETS HIT BY LIGHTNING 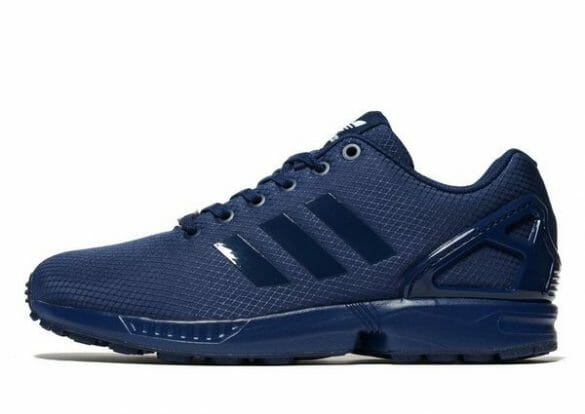 The adidas ZX 8000 is one of the shoes that defined our youth.Standing out in a marketplace riddled with all kinds of brands, from the obvious to the exotic-sounding, the ocean blue and lemon twinned with the bizarre cutaway in the midfoot had us gravitating to the 3-stripes for the first time in a while. The Chipie-wearing unofficial wallet inspectors and some more progressive terrace types seemed happy to lay down close to 90 quid on a pair and we’ve loved them ever since.

There were some modified versions of the shoe released in the very early 1990s and there have been plenty of retros and homages since. Footpatrol’s 2008 love letter to the London Posse endorsed ZX 800 and the London legacy of the 8000 in 3M was superb. The Mega Torsion collection however was not our kind of thing. When we clocked the adidas Originals ZX Flux collection in a catalogue, we feared the worst but the end result is surprisingly good. We were surprised because most new shoes using old DNA leave us cold. Looking like a response to the Roshe Run phenomenon and a nod to the graphic print capabilities of the Presto, but far from being a copy (anyone else recall the adi Presto-alike from 2001?), it’s a shoe that celebrates what makes adidas great by making the sole, heel counter and the slimline silhouette it informs the star.

The all black ZX Flux is a stealthy shoe but that elemental lightning design is the one for us, with that late 1990s bashiness that takes us back to the essence of the 8000’s appeal. After the launch in Berlin a couple of weeks back, it’s evident that adidas are going to go wild with this one (that ocean pattern edition has us smitten), but these three colourways set things off when they drop.

Where to buy a pair of ADIDAS ORIGINALS ZX FLUX