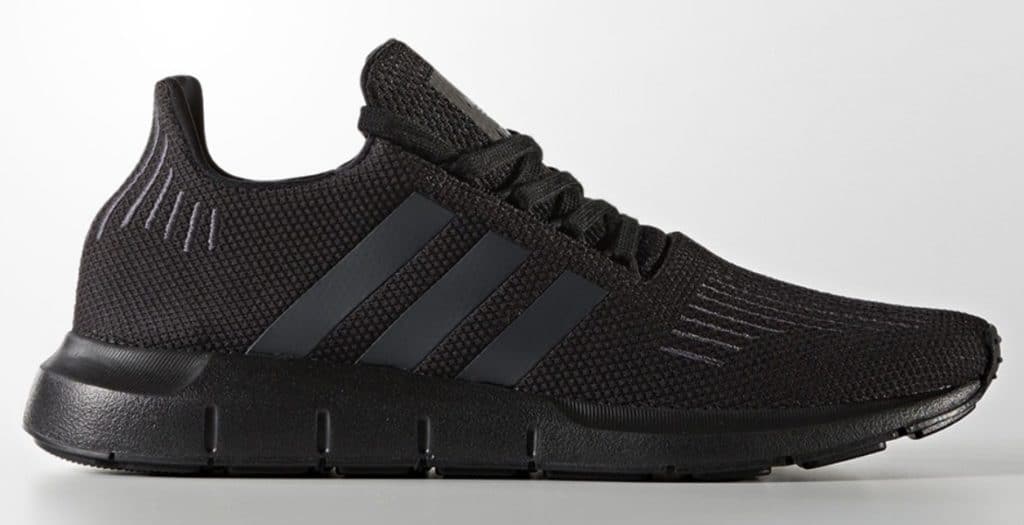 Adidas have had unrivalled success in the past couple of years, really upping their game with technologies such as their famed boost. Yesterday they unveiled a brand new silhouette to the world – the Swift Run.

It’s always an exciting moment when Adidas decided to release a new silhouette. New colourways or re-iterations of old silhouettes come up often but completely new designs are a little less frequent. Yesterday we saw the unveiling of the Adidas Swift Run. Later in the day we were previewed the sneaker in a triple black colourway – a palette ever popular with the consumers.

The new Adidas Swift Run will be constructed entirely of mesh, instead of the primeknit material used for the other colourways that have been previewed so far, however it features the same foam sole unit as it’s counterparts. The sole claims to be comfortable enough for everyday wear, as well as athletic activities.

Other features fo the Triple Black Adidas Swift Run include three stripe branding along the mid-foot in traditional Adidas fashion, as well as embroidered stripe detailing throughout the toe and heel of the sneaker. There’s also classic Adidas Originals branding on the tongue of the shoe so as to keep some things as we know and love them.

The “Triple Black” colourway is set to launch worldwide on July 27th, along with the other colourways of the swift run. They’re expected to be a massive hit due to their simplicities and appealing look. If the success of previous triple black colourways are anything to go by the triple black swift run are definitely going to succeed – all black is very fashionable right now.