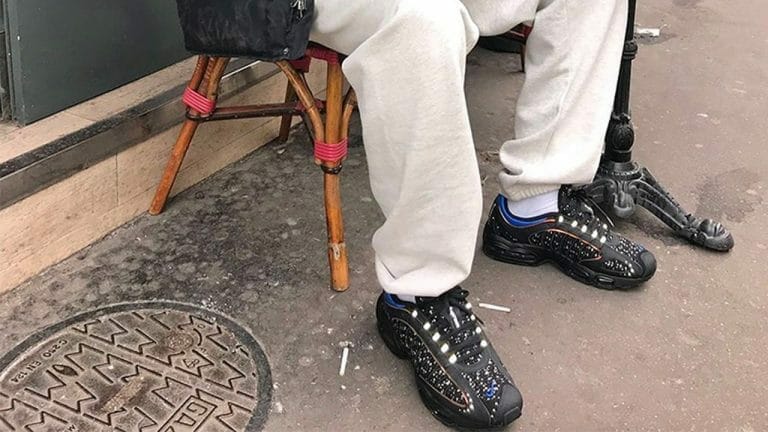 Supreme have a long history of collaboration with Nike, with some of their team effort sneakers being much more prolific than others. In this guide we’ll talk you through every single Supreme x Nike trainer that’s been released to date.

From the high profile Supreme x Nike Air Max 98, to the lesser known models such as the Supreme x Nike Tennis Classic, we’ve got it all covered here. If you want to learn about how streetwear and sneakers turned into one, or if you’re an OG and simply want to refresh your knowledge, read on for everything you need to know. 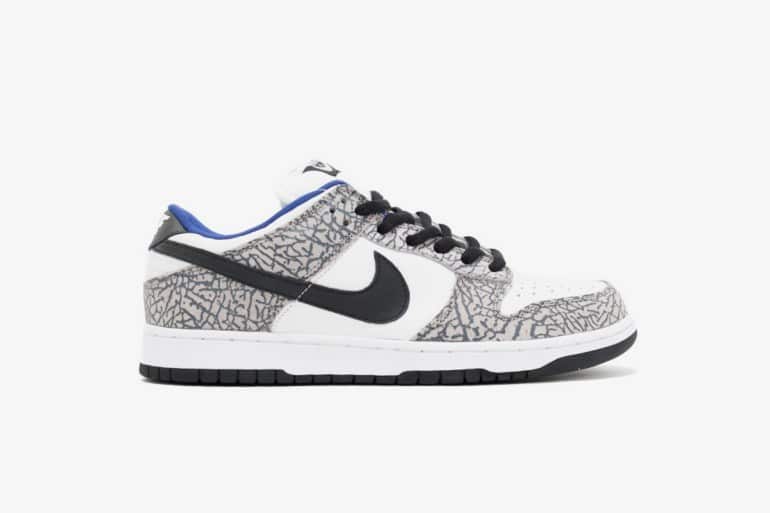 Take the clock way back to 2002, and by far the most desirable sneaker out there was the Nike SB Dunk. Sneakerheads around the globe would have huge Dunk collections, and queue for days on end to get their hands on the most limited releases. The most interesting part of this release is the fact that there was no announcements or prior warnings of the release, they were simply placed on shelves at Supreme’s Layafette location and left to sell slowly to local sneakerheads as word spread by mouth. 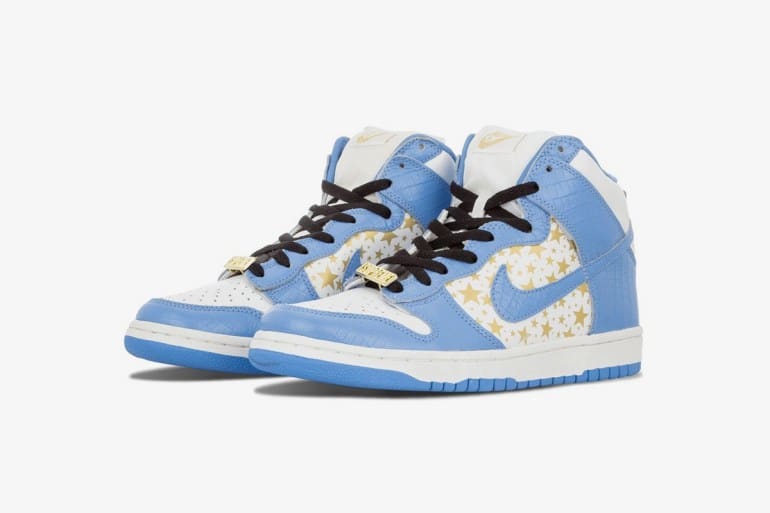 Following on from the initial Supreme Dunk release a year later, the Dunk was the go to silhouette for the brand again. This time they opted for the high top edition of the sneakers. The shoes released in three different colourways; Univerity Blue, College Orange and Varsity Red, and each colourway was released on a separate day during the same week. Colourways were limited to one per customer. The model featured gold star branding on the side, Supreme branded lace locks and a faux crocodile skin upper. 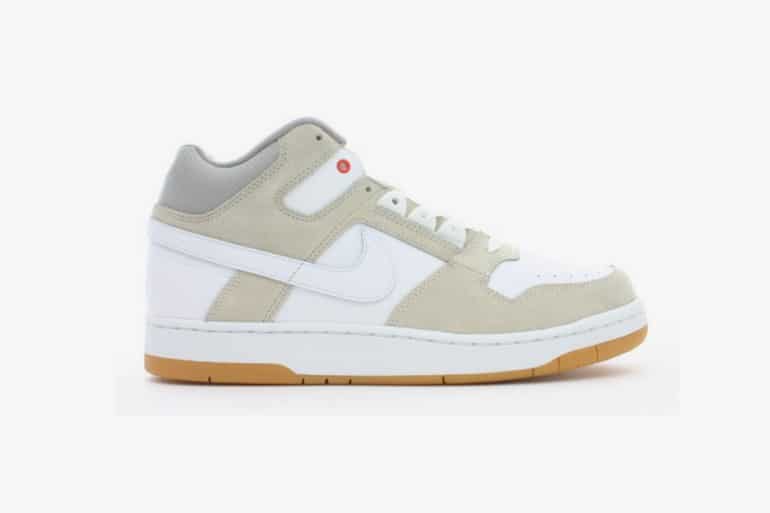 The Delta Force is a rather unknown Nike model, it’s an 80’s basketball shoe that didn’t get that much exposure even back then. In 2004, Nike SB wanted to bring the Delta Force back, and turn it into a skate shoe. They decided the perfect way to do this was to team up with Supreme. The result was a bulky yet functional skate shoe, with no real Supreme branding and following a white/grey/gum colourway. The shoe didn’t really generate much interest, and was readily available in Supreme stores for a few weeks. 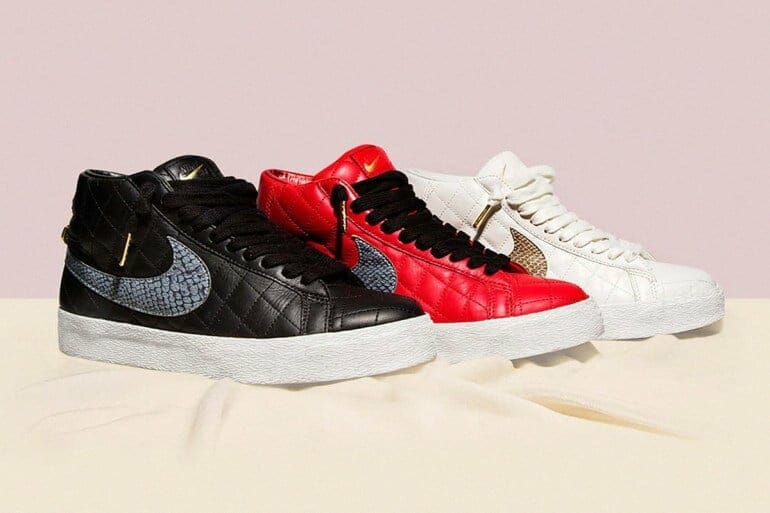 The Blazer has always had it’s place in skateboarding history, even though it wasn’t originally intended as a skate shoe. Supreme chose the Blazer as it’s model of choice for a collaboration in 2006, and the result was favoured by sneakerheads, skaters and fashion conscious people around the globe. The release was extremely luxury and caused quite the stir, featuring quilted leather uppers, gold lace tips and a Supreme branded ankle ring. It sold out quickly and has been a hit ever since, with pairs still popping up on the resell market from time to time. 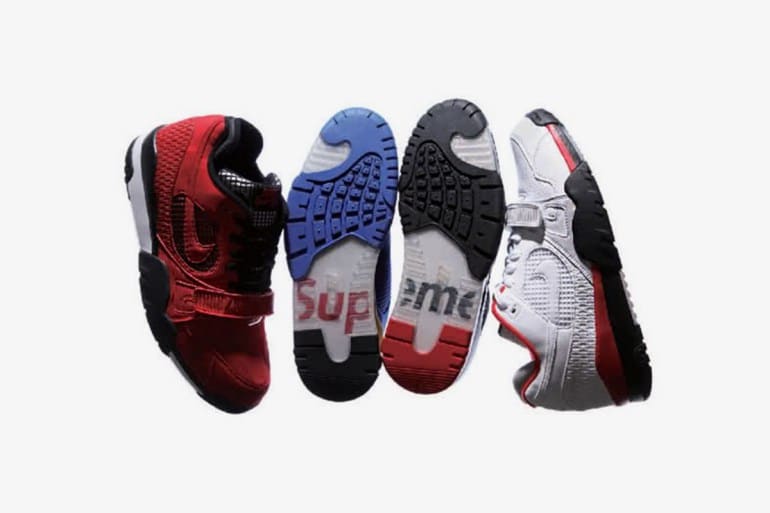 As the first of the Nike collaborations to feature Supreme’s actual logo, this release was a pretty big deal. Four different colourways were launched, and the release was on such a high scale that crowds of sneakerheads flocked Supreme’s Layafette branch. Eventually, NYPD arrived and ordered the store to sell through all their stock on a single day to avoid disruption to local businesses. 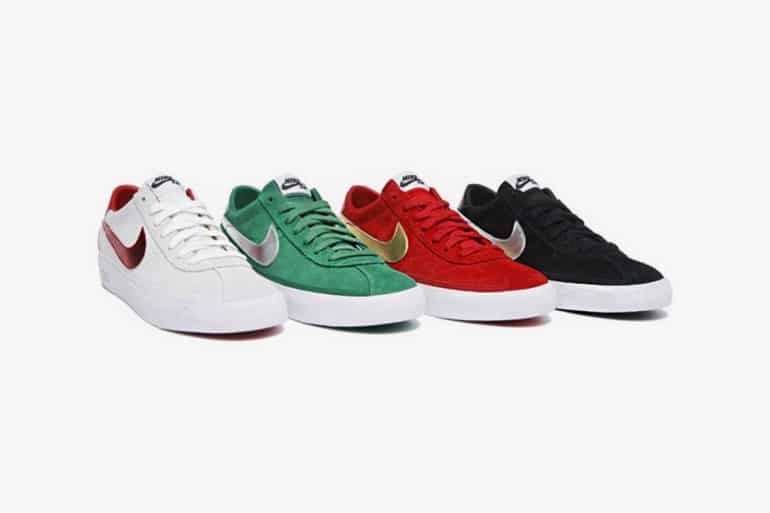 Much like the Blazer that was released 3 years prior, the Bruin was originally a shoe designed in the 70’s aimed at basketballers, however it was quickly adopted by Californian skaters back then. Supreme and Nike went for the simple approach again with this model, with the signature touches being a bold metallic Swoosh and “World Famous” detailing across the heel tabs. 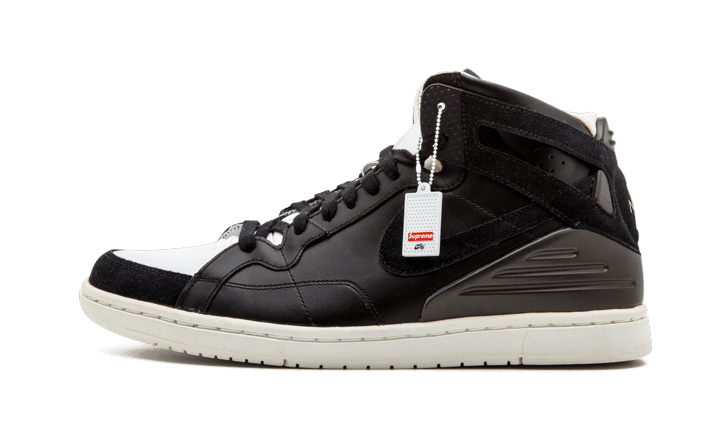 This 2010 collaboration was pretty revolutionary due to the fact it wasn’t an existing silhouette with the brands added touch – it was in fact a brand new silhouette designed by Supreme and Nike together. It featured Foamposite and Zoom Air technology, therefore it was extremely specced out for its time. The design was a nod to the past, being based on basketball sneakers of the 70’s and 80’s that skaters back then would wear regularly. 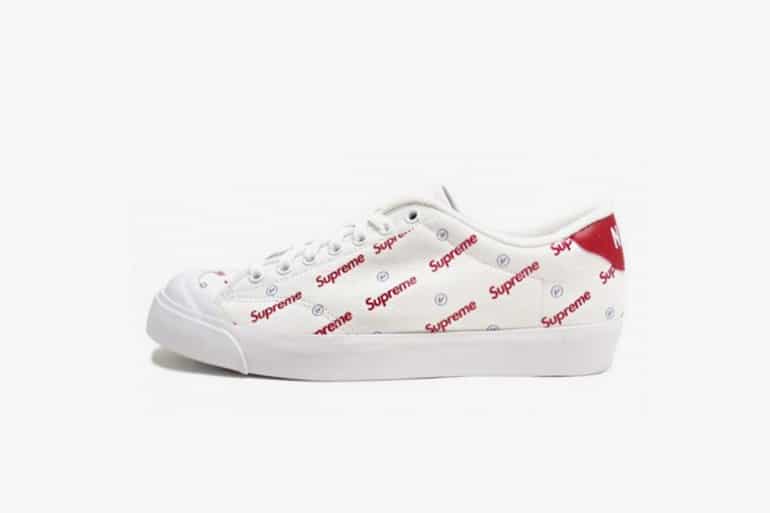 As the first Supreme x Nike shoe to not be an SB project, this release was also a game changer. It was a three way collaboration alongside Japanese brand Fragment Design. The design featured both Supreme and Fragment’s logos plastered all across the upper of the Swoosh-less tennis shoe. The pair actually never made it to release, although several pairs did end up floating around the resell market for a while. 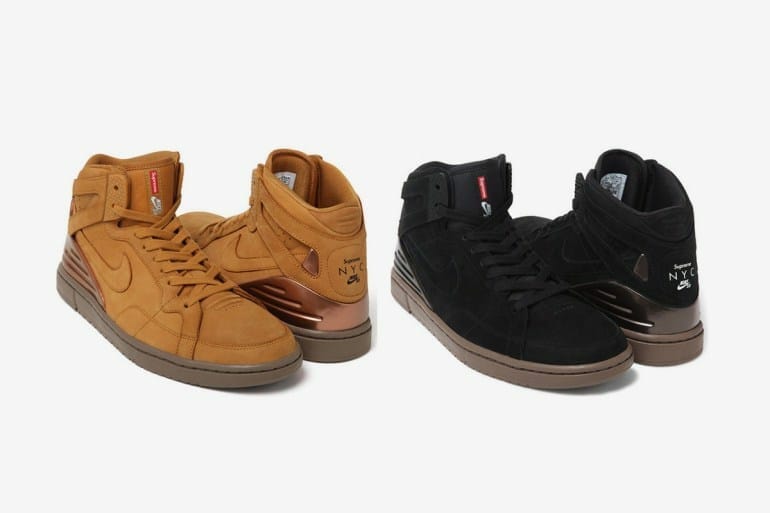 Following on from the previous year’s SB 94, Nike reworked the shape slightly and re-released the model in two brand new colourways. Dual branding could be found on the tongue of the shoe and iconic “Supreme NYC” branding was located on the heel of the sneaker. The release was much more popular this time around and sold out quickly. 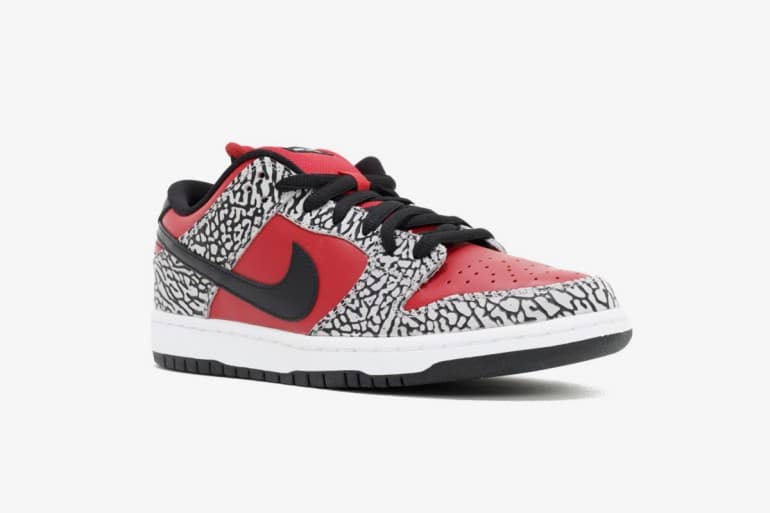 2012 marked the 10th anniversary of Nike collaborating with Supreme. To mark the occasion, they revisited the original model that the two brands collaborated on. The design was kept very similar, although the blue side panels were swapped out for red instead. A Supreme logo was featured on the insoles of the shoe and they also came with a dual branded hand tag. The Dunk certainly wasn’t as hyped as it was back in 2002, however sneakerheads still flocked to Supreme locations and bought the shoe by the truck load. 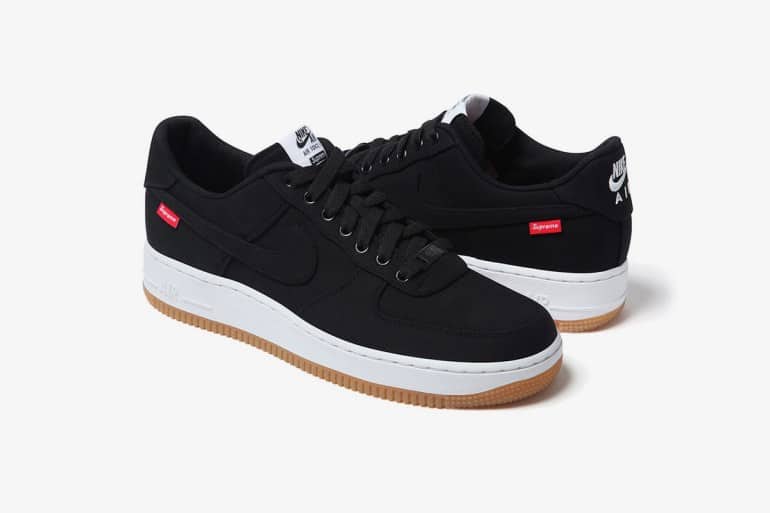 By this time, Supreme was no longer just a skate brand. It was a global fashion phenomenon, collaborating with all sorts of huge brands. So, for their first official non-SB collaboration, it only made sense for it to be an Air Force 1. As probably the most popular Nike sneaker of all time, and a definite favourite in New York, this team effort was a huge success. Special touches included water resistant uppers, and white midsoles with gum bottoms. 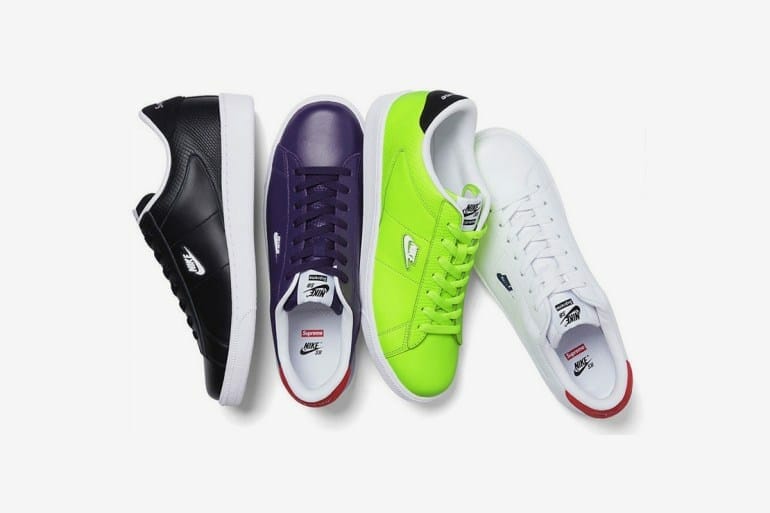 Following on from the Air Force 1, Supreme returned back to the SB line. With a classic tennis shoe redesigned with skateboarding in mind. It came in four original colourways – black, white, blue, and a tennis ball like volt green. The shoe featured dual branding on the insole and tongue, and Zoom Air technology. 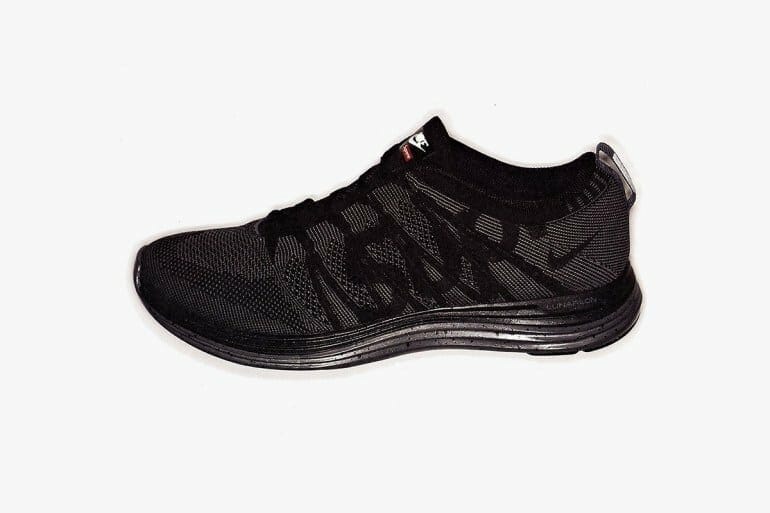 Less than half a year after the Tennis Classic, Supreme and Nike bought us the Lunar 1+. Flyknit models were hugely popular at the time, especially the trainer and the runner. However, Supreme decided to go against the trend and chose the 1+ for it’s collaboration. Coming in a singular black/dark grey colourway, the sneaker featured Supreme “Sup” branding woven into the Flyknit upper, and a small red box logo on the tongue. The shoes were actually marketed as a joint project between Nike’s mainline brand and Nike SB, and came packaged in a Nike SB box. 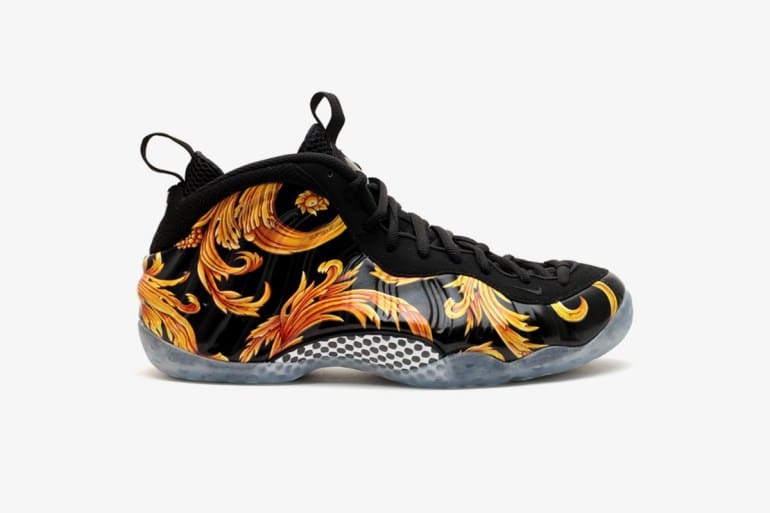 Despite their strange futuristic looking appearance, Foamposites are one of the most popular silhouettes out there for sneakerheads (more so Stateside than in the UK). Supreme decked them out with bold baroque-looking patterns, and they certainly stood out from the crowd. This release was the first Nike x Supreme collaboration that actually got shut down in store. The chaos at Supreme’s Layafette location was so bad that the NYPD ordered it to be cancelled, and it was eventually an online release only. 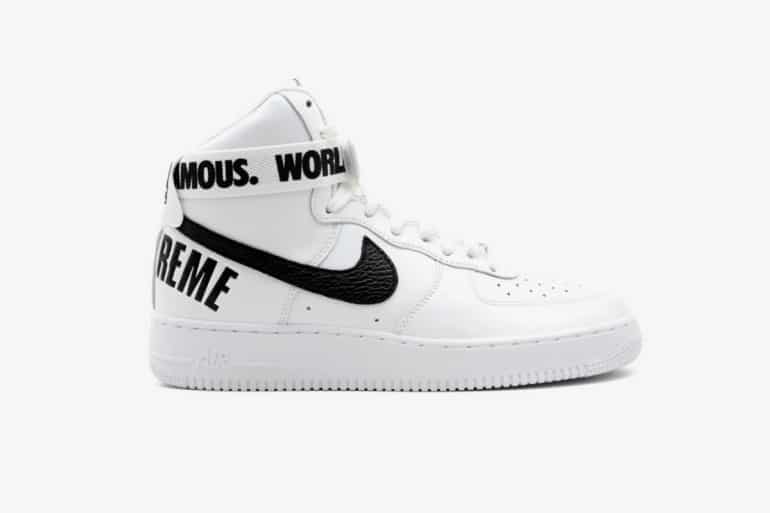 Supreme returned to the Air Force 1 once again with this awesome high top rendition. Launching in three colourways (black, white and red) and featuring a premium leather upper, this release was a huge success. “World Famous” branding was emblazoned across the ankle strap, and “Supreme” was printed across the heel of the sneaker in capital letters. This was probably the loudest Supreme x Nike sneaker yet. 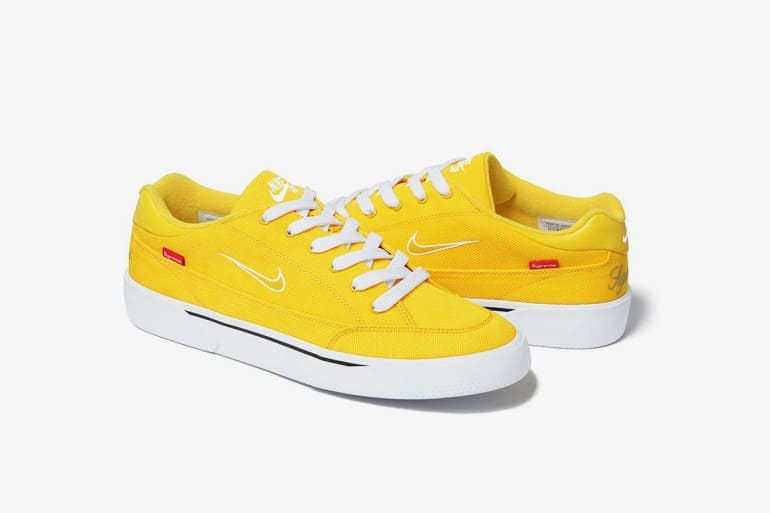 This was the first SB release Supreme had worked on in two years. The silhouette was originally a tennis shoe adopted by skaters back in the day, much like previous models Supreme have worked on. The shoe was constructed of a Herringbone canvas upper, featuring a low-key Swoosh and a small red tab showcasing Supreme’s box logo. Five different colourways were available upon release. 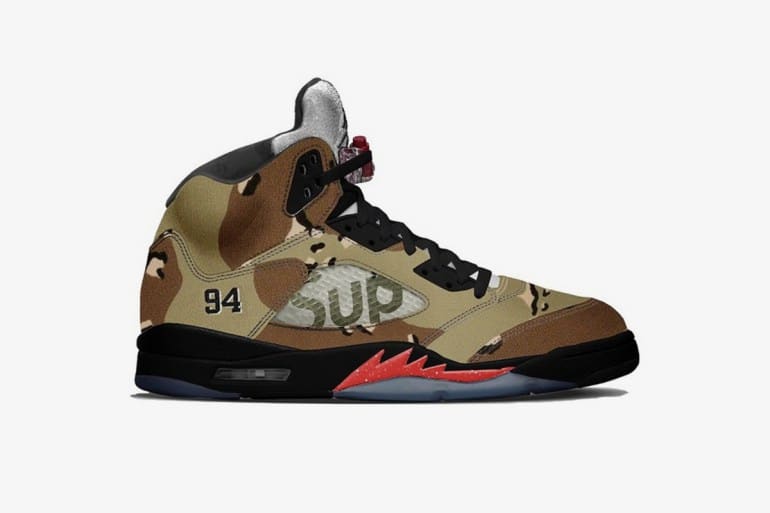 This was the collaboration that shocked both the sneaker and streetwear world. Who would’ve thought that Supreme, a skateboarding brand at heart, would collaborate on an Air Jordan? Well, it happened. The model of choice was the AJ5. Three colourways launched – black, white and desert camo. The Supreme logo could be found all over the shoe – on the sole, the lace locks, and printed across the side. Due to unprecedented hype surrounding this Air Jordan, it was an online only release across the whole of the US. 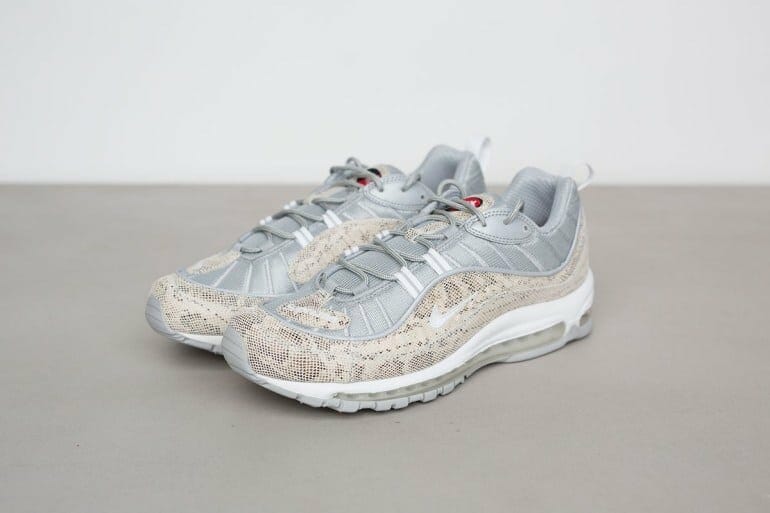 Once again, Supreme shocked its fans by deciding to work on an Air Max model with Nike. Of course, in typical Supreme fashion, they didn’t pick an obvious model either. Instead of an Air Max 1, 90, or 97 as one might expect, they chose the Air Max 98 – one of the lesser known Air Max silhouettes. Four colourways were launched initially – the snakeskin colourway (pictured), an all black patent leather pair, plus red and blue colourways both featuring white detailing. These released online only across the world with the exception of Asia. 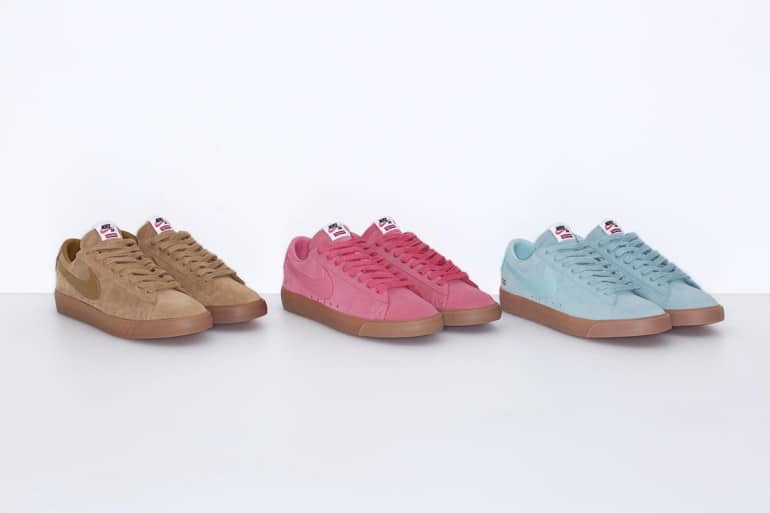 It was time for another SB release for Supreme, and the Blazer was the model of choice. This time they opted for the simple approach, releasing three clean suede colourways. Dual branding was featured on the tongue of the model, and a small box logo could be found on the rear of the shoe. Fans had mixed opinions on this release, and although it sold out on the day of release, it certainly wasn’t as instant as previous collaborations. 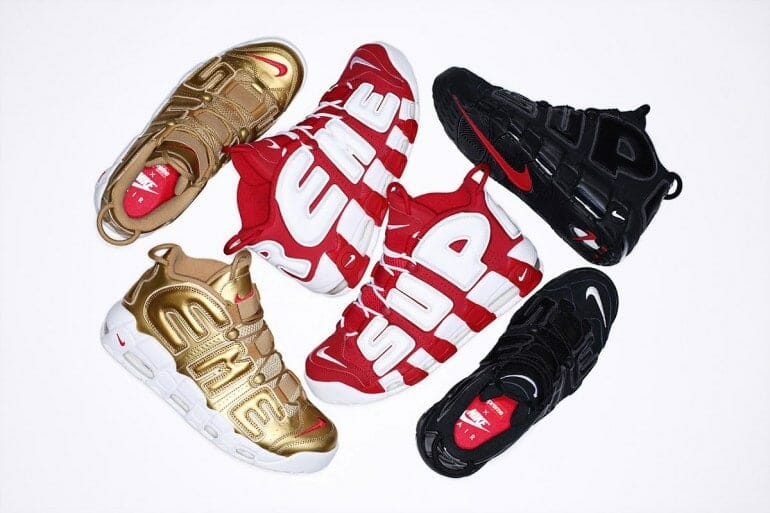 The Air More Uptempo recently made a bit of a comeback, being reintroduced into Nike’s mainline range. It’s a love/hate shoe, making a big statement with “AIR” emblazoned across the side. However, Supreme put its own spin on the sneaker, switching the “AIR” branding to “SUPREME”. It’s a rare occasion for Nike to let collaborators alter the design of a silhouette this much, so it just goes to show how well the two brands are established with each other now. 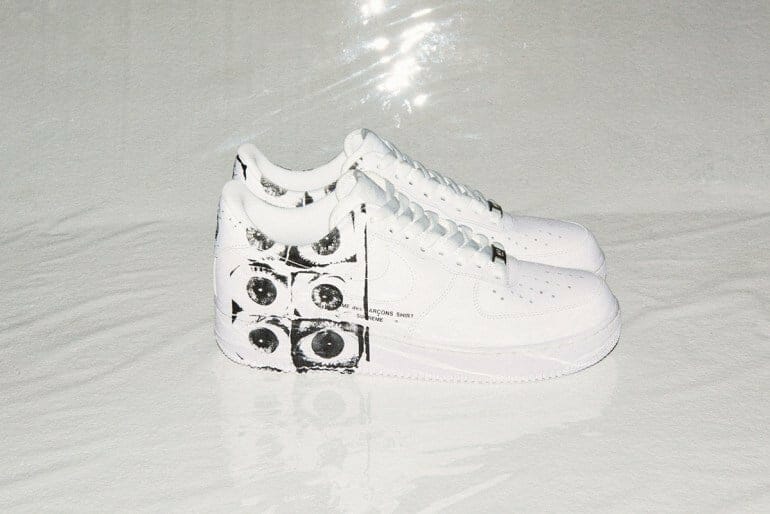 Supreme’s partnership with COMME des GARÇONS has included a variety of different footwear releases in the past, namely with Vans, however this time they decided to get involved with Nike. The simple white-on-white silhouette was adorned with Japanese-style eye branding covering the rear and midsole. Dual branding was also featured just below the Swoosh. A whole collection of apparel including a two piece suit and a wallet was released alongside the sneakers. 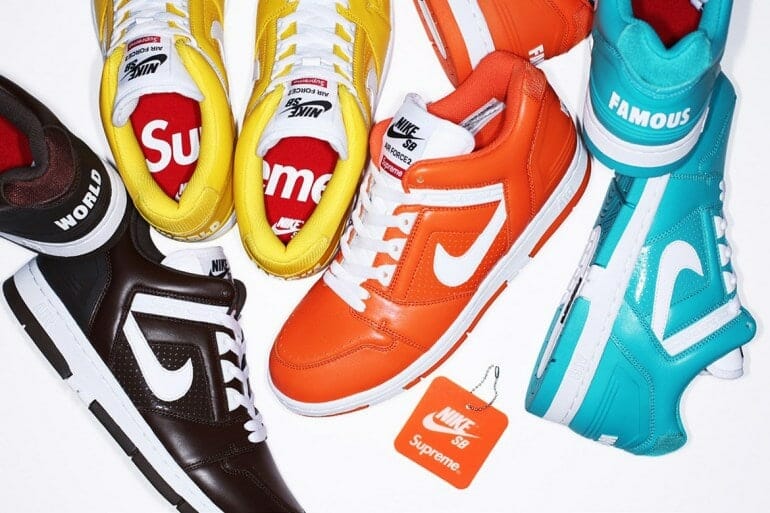 Supreme chose the relatively unknown Air Force 2 for their winter 2017 collaboration, releasing it in four bright and bold colours. Dual branding was featured on the tongue and Supreme’s logo was printed across the insoles of the shoe. This was another release that had mixed reactions from fans, maybe due to the colourways.

If you didn’t have any knowledge regarding Supreme’s long history with Nike, hopefully this guide has educated you enough so that you’re not the new kid on the block anymore. Who knows what the future holds for the relationship between the two brands, but what we do know is that it doesn’t show any signs of slowing down. With more releases than ever this year, the future looks bright for both Supreme, Nike, and their efforts together.

Where to buy a pair of Supreme x Nike