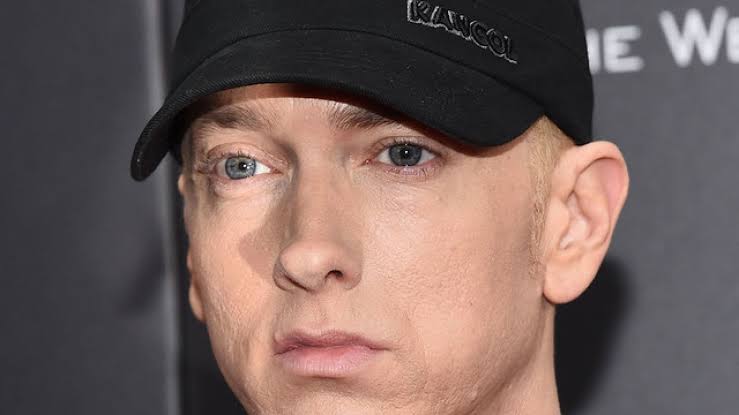 Over the years, hip-hop legend Eminem has created many collaborative sneakers alongside Nike, with some being extremely limited. We’re taking a look back at every project he’s ever been involved with – think of it as a comprehensive guide.

In fact, Eminem has had so many signature sneakers over the years that it can be hard to keep up with them all. That’s half the reason we’ve put this list together. The OG’s of the game can refresh their knowledge, as some models are easily forgotten, and newbies to the game can learn about these historic pairs for the first time. Whether you’re either of those or just somewhere in the middle, we have no doubt you’re going to enjoy this guide. 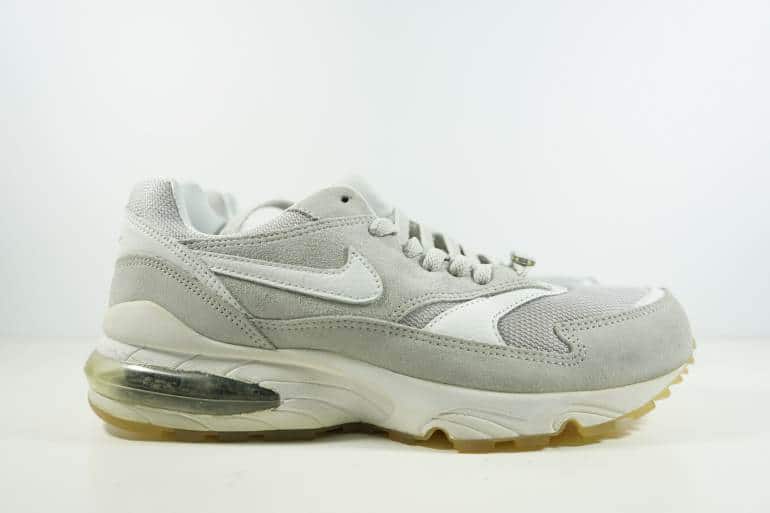 In 2003 Nike launched the “artist series”, collaborating with some of the most prolific musicians of the current era. One of those chosen was Eminem, and his take on a Nike shoe was decked out in all grey, and very visually similar to an Air Max 93. It was polished off with white details and a gum sole, along with Eminem branding on the rear. This model in particular was frequently rocked by the man himself back in the day. 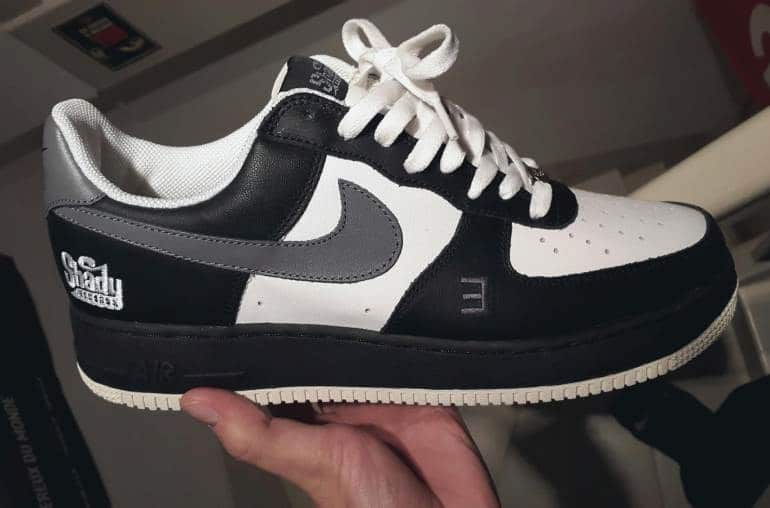 To celebrate the launch of Eminem’s fourth major studio album, titled “Encore”, Nike treated Eminem to several friends and family version of the Air Force 1 in 2004. The first one of these was the “Shady Records”, which featured their motif on the heel of the sneaker, and Eminem’s signature “E” closer to the toe box. A clean black, white and grey colourway was used throughout. Good luck finding a pair of these today – they’re like gold dust. 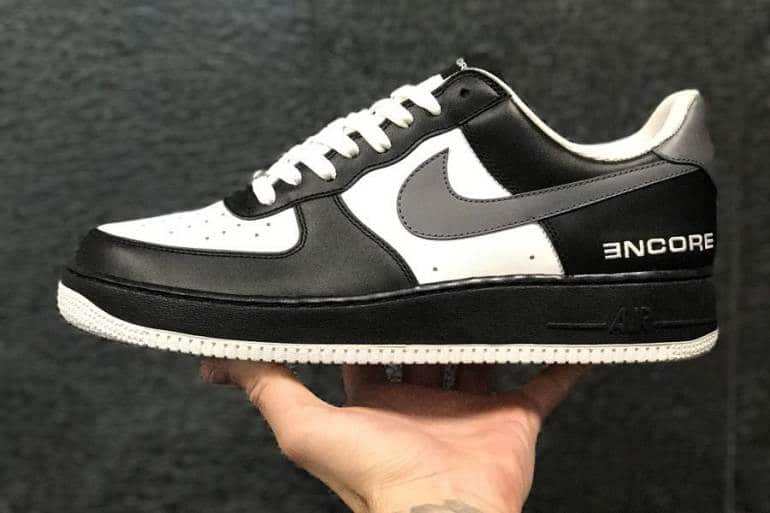 The second Air Force 1 gifted to the star himself shared the same name as Shady’s latest album “Encore”. They came in a very visually similar colourway to the Shady Records edition, and the only real difference was “Encore” embroidered onto the rear of the sneaker. As you’d expect, these are a total myth to find for sale and will set you back a pretty penny. 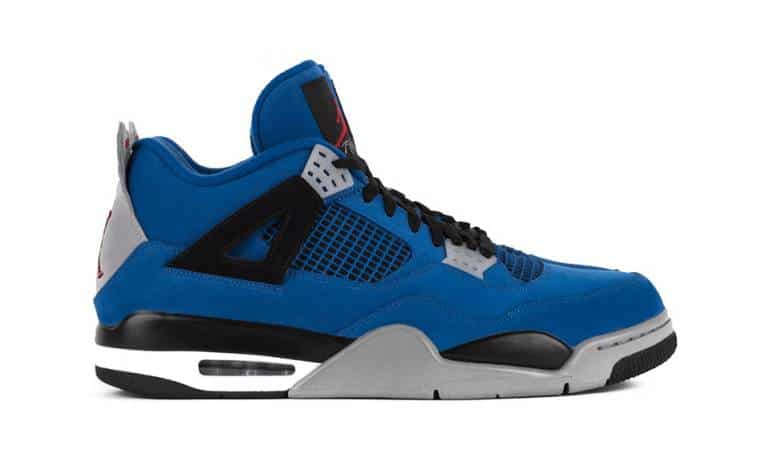 Eminem has always been a huge fan of the Air Jordan IV, and his first ever signature Jordan was, unsurprisingly, an AJIV. The collaboration was rumoured to be limited to just fifty pairs, and was gifted to friends and family of Em’, with a very small amount of pairs made available to the public via raffle. The kicks were instantly distinguishable via their electric blue colourway, finished off with red detailing. 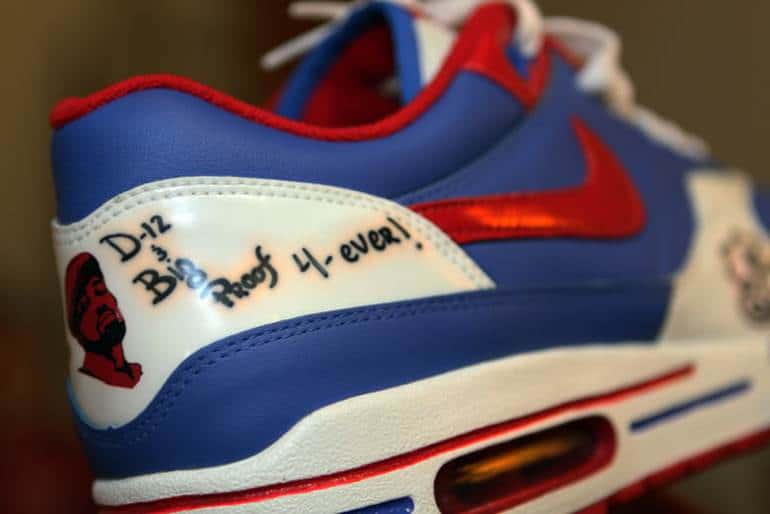 2006 saw Eminem and Nike team up again, but this time the reason wasn’t just for the star to get some new kicks, it was a project dedicated to raising money for charity. The charity of choice was of course Marshall’s very own Marshall Mathers foundation which aims to benefit disadvantaged and at-risk youth. The first of the pack was an Air Max 1, dedicated to Eminem’s lifelong friend Big Proof, who had been gunned down a year prior. 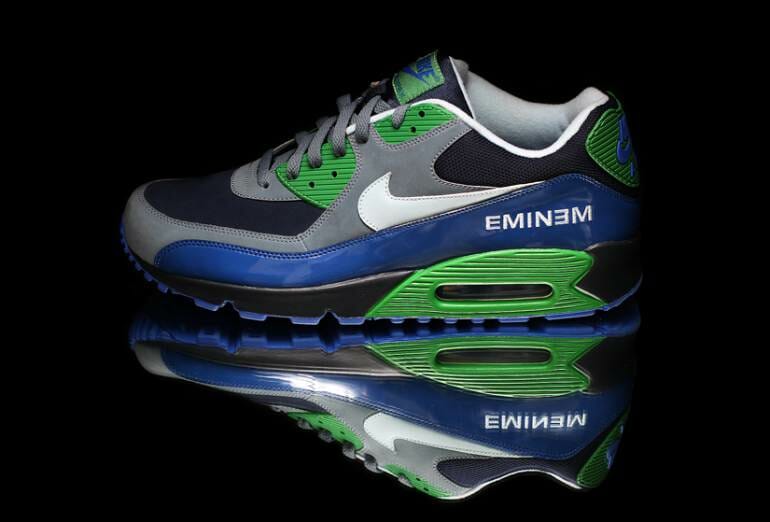 The second silhouette featured in the charity series was the iconic Air Max 90. It featured a blue, green, grey and white colourway, and displayed the classic “EMINEM” logo on the upper. Like the rest of the series, it was made in extremely limited numbers and auctioned off via eBay and several Nike locations around the world. You’d have to be very lucky to come across a pair of these for sale these days. 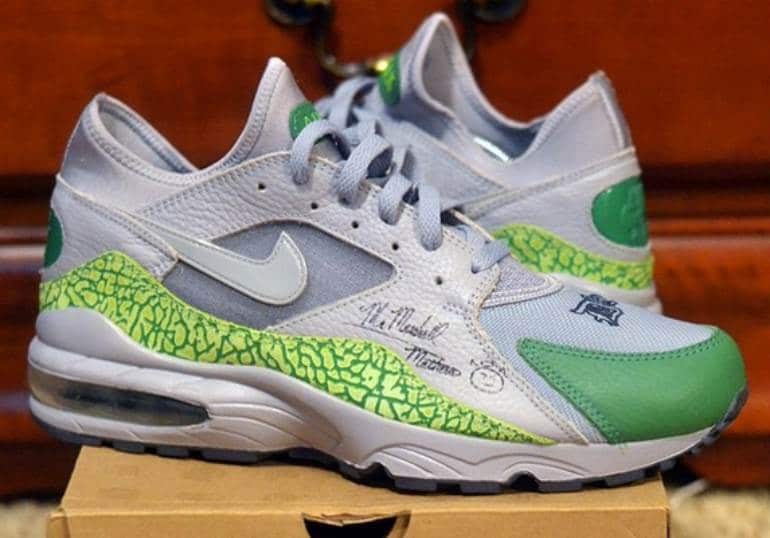 Next up in the highly coveted charity series was the Air Max 93. It’s an often overlooked silhouette, despite its timeless design, so we’re glad that the star picked the model to be included in his series. He dressed this one out in a clean white and green colourway, displaying motifs from D12, the rap collective Eminem was a part of. 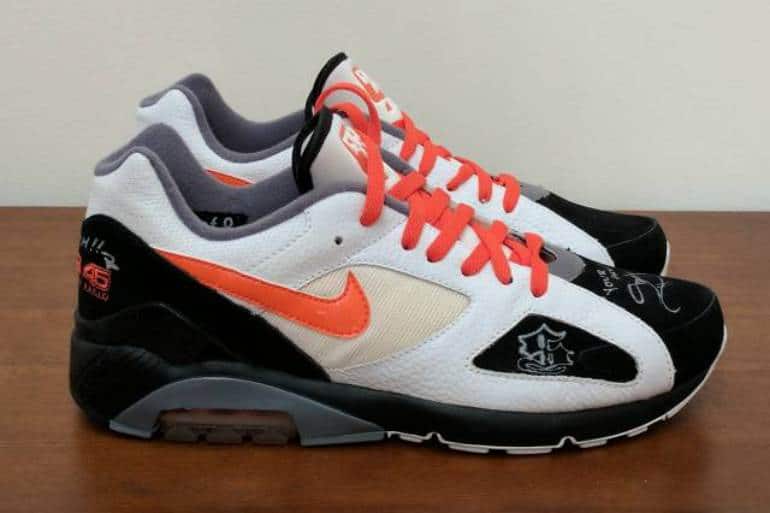 The Air Max 180 also made an appearance in Em’s charity pack, decked out in possibly one of the cleanest AM180 colourways we’ve ever seen. It featured orange detailing, off-white and black, and just looks effortlessly clean. The top this all off, it was branded with Shade 45 detailing, Eminem’s radio station for those not in the know. 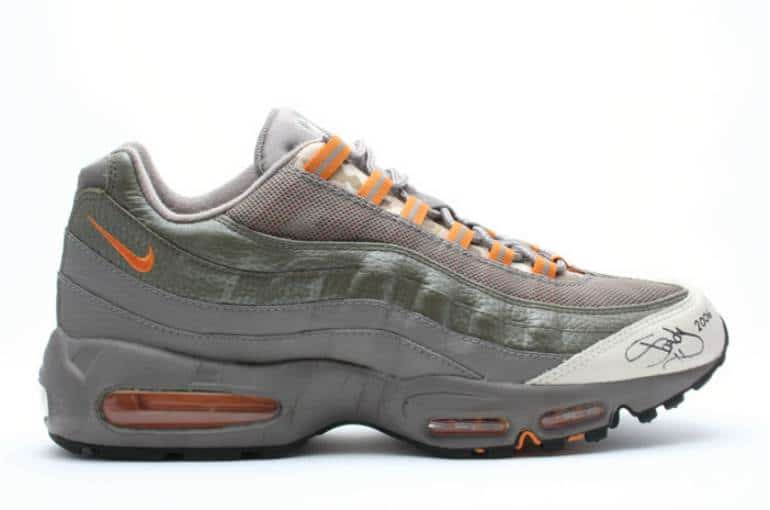 The Air Max 95 was the first of the charity series not to be designed solely by Eminem. This rendition was designed by the stars manager and Shady Records co-founder Paul Rosenberg. It was finished in Goliath inspired grey and orange hues. Like the rest of the collection, it was extremely limited and only available via auction. 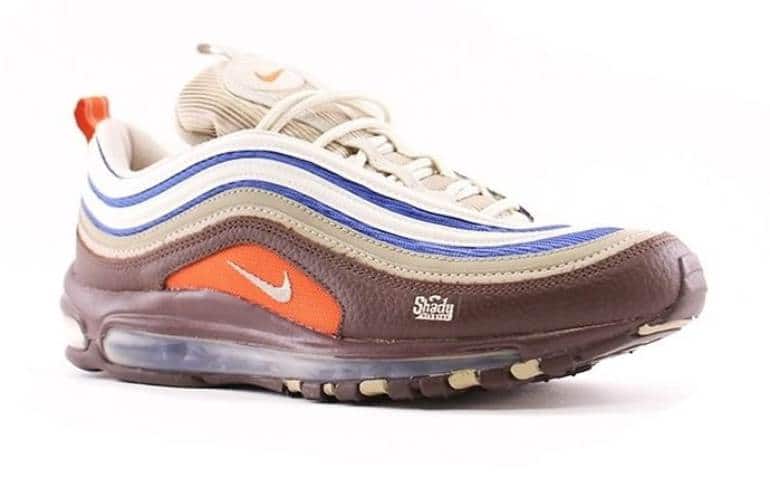 Although Eminem has actually publicly voiced his dislike for the Air Max 97 before, stating that the toe box “makes it look like a clown shoe”, it was indeed included as part of his charity series. The colourway was complex, featuring brown, orange, blue, white and tan. On the lateral toe the Shady Records emblem could be found, finishing off what is a very clean sneaker. 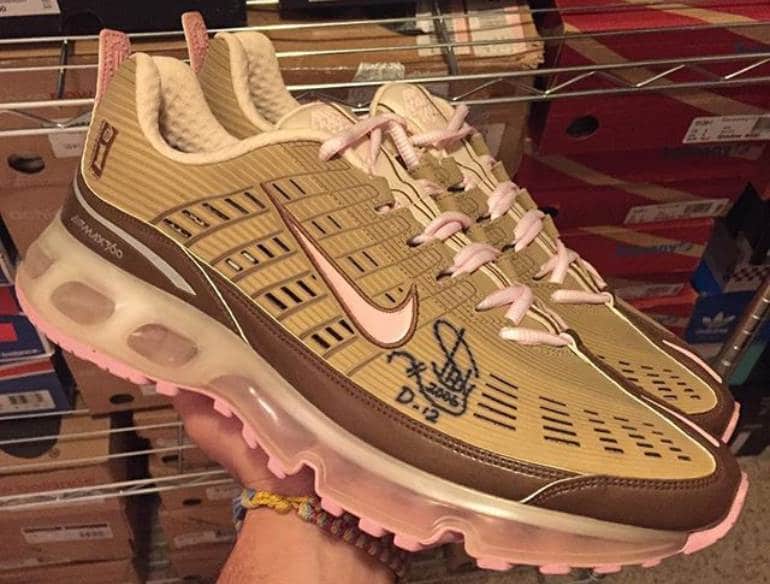 This sneaker is actually so few and far between that we struggled finding a decent image of it online, which says a lot. The sneaker was designed by Christian Clancy, former Marshall Mathers LP product manager, also known for managing Odd Future in their glory days. The colour scheme was very subtle yet clean, and featured Interscope Records branding on the heel. 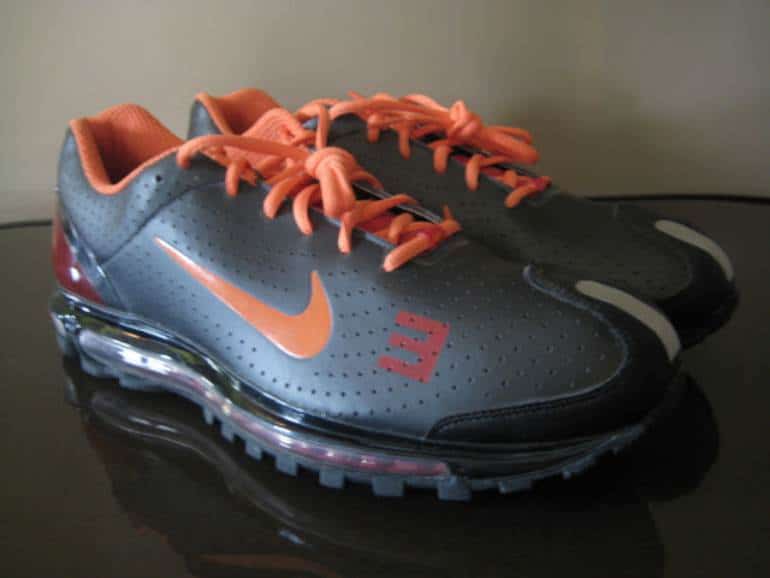 The final addition to the expansive charity series was none other than the Air Max 2003. It’s another silhouette that’s rarely seen these days, and if we’re honest it isn’t the best out of the collection. The sneaker was decked out in all black featuring an orange swoosh, laces and inner lining. Eminem’s “E” was featured on the toe box of the sneaker also. Unfortunately this silhouette isn’t anywhere near as desirable as the rest of the charity series. 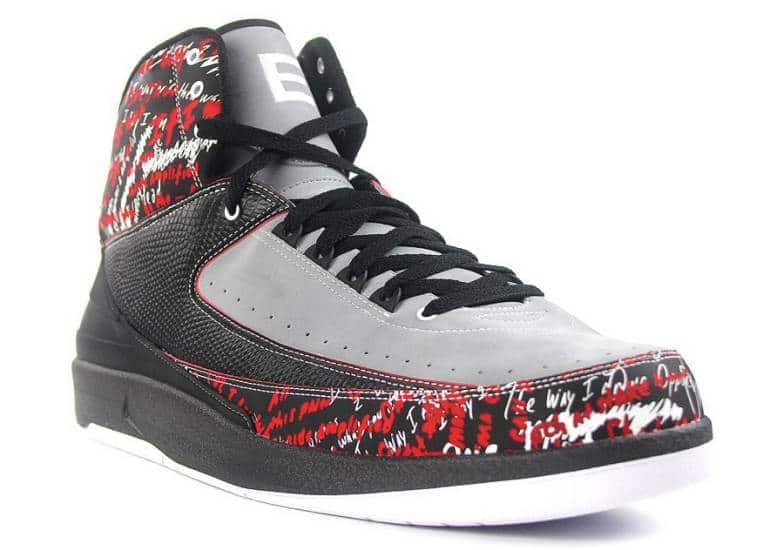 The Air Jordan II was Marshall’s first pair of J’s growing up, and because of this he claims they’ll always be his favourite silhouette. To help promote the launch of his 2008 autobiography “The Way I Am”, the star collaborated with Jordan Brand to release 313 pairs of an Air Jordan II titled of the same name. The sneaker was dressed in grey suede and black leather and featured his lyrics jotted over the upper. The sneakers release exclusively online via the Air Jordan Flight Club. 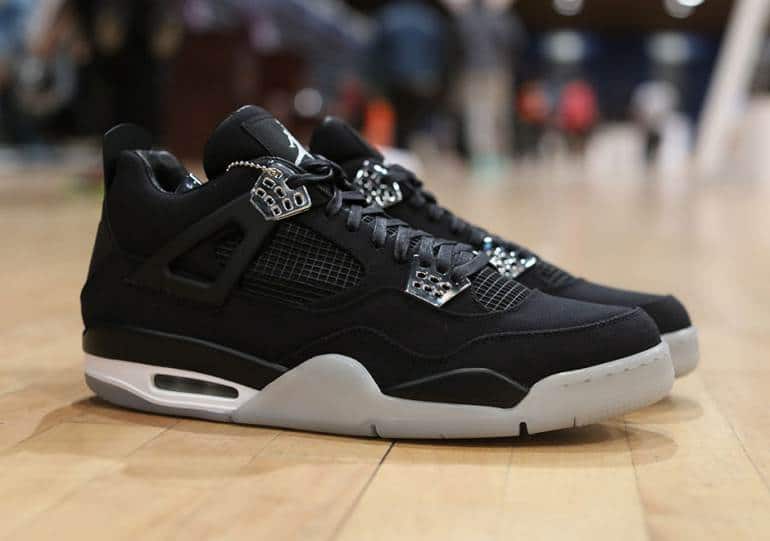 Eminem’s most recent sneaker was a three way collaboration with Jordan Brand and workwear legends Carhartt. The upper of this AJIV was constructed of Carhartt twill, and although eternally simple the colourway was a solid winner. Other notable features include chrome accents, waxed laces, a leather interior and a translucent outsole. Eminem’s “E” logo appears on the rear of the sneaker, and these remain some of the most desirable Air Jordan’s around.

It’s clear to see that Eminem has a huge passion for sneakers and also knows what he’s doing when it comes to designing them. The majority of sneakers that he’s added his personal touch too are grails to most, and resell for extraordinary amounts. We’re also huge fans of the charity series – it’s great to see a celebrity doing something out of goodwill rather than to make a quick buck. Let’s hope Eminem creates another signature sneaker soon, as it’s been three years since the last one, so in our opinion it’s well overdue.

Where to buy a pair of Eminem’s Signature Sneakers