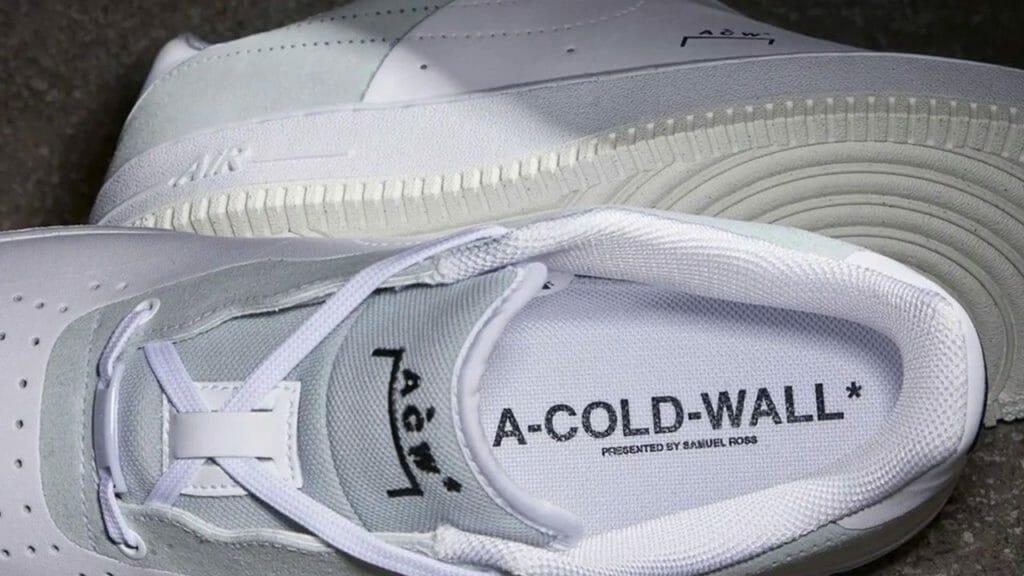 Ever since sample editions of the A-COLD-WALL* Nike Air Force 1’s were seen on the runway at January’s LFW, streetwear fans, high end fashion snobs, and sneakerheads alike have been eagerly awaiting an official release. The time is now upon us.

Samuel Ross, the creator of A-COLD-WALL* was once referred to as “Virgil Abloh’s apprentice”, and served as his right hand man for a long period of time. So it seems timely that just after the first five of Virgil’s “The Ten” dropped, that Samuel’s ACW Air Force 1 is getting it’s very own official release. The sneaker was first seen during ACW’s show at January’s LFW, with each model sporting a pair on their feet. Fans of the brand around the world were instantly hyped on the thought of a Nike collaboration, however for many months we’ve only seen friends and family wear sample pairs. But earlier today, a close-up photo of the pair was posted on A-COLD-WALL*’s Instagram page, with the caption reading simply “October 21st”. This was shortly followed by an official announcement from Nike.

When quizzed on his choices, Ross tells us that he chose the AF1 for his collaboration because it’s a “benchmark shoe for London”, and “growing up with the culture, it wasn’t something I was very conscious of but it was a feature of it: You always had the Nike tracksuit with the Air Force 1.” Featuring an interesting lacing system, dual branding on the tongue, and ACW branding on the upper of the sneaker, the Nike x ACW Air Force 1 follows a clean white/off-white/grey colourway throughout. The model also continues A-COLD-WALL*s continuous minimalistic theme, seen incessantly through everything they produce. The shoes are intended to look unfinished yet still meticulously crafted, and in our opinion they pull off this look effortlessly.

The industrial-esque sneakers will be launching via a pop-up space in London this Saturday, the 21st of October. When asked how he will present the store, Ross states “I am going to focus on the sound experience when you enter the gallery space, and tame the temperature. The mood and tone will feel quite cold, very industrial and loud; but it won’t be achieved through collecting objects. It will be achieved through a sonic experience for the most part; use of white space.” If like us, you’re looking forward to getting your hands on a pair of this groundbreaking collaboration, please be aware this release is going to be extremely hyped. A plan of action will definitely be necessary to grab these, as they are possibly the most hyped sneaker release taking place this month.

Where to buy a pair of Nike AF1 A-COLD-WALL