A Closer Look at the STAMPD x BAPE Roadsta 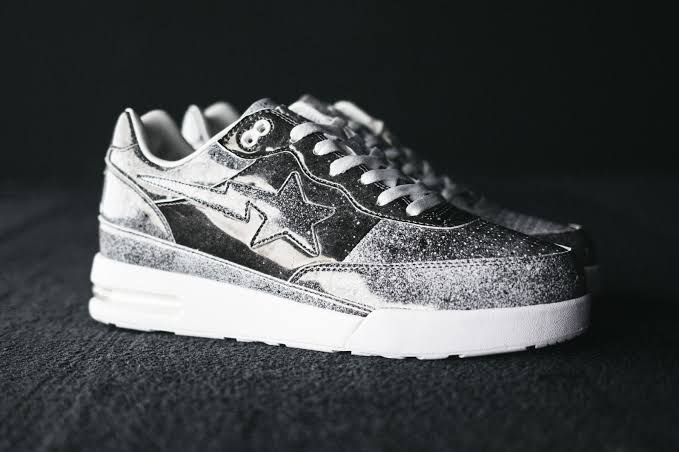 Legendary streetwear brand A Bathing Ape have teamed up with LA lifestyle brand STAMPD for a Roadsta sneaker. The Roadsta is the lesser known of Bape footwear silhouettes, however this collaboration is certainly a head turner.

Bape have been around in the footwear market for a rather long time now, with the Bapesta being their most popular and prevalent model. However, STAMPD chose the lesser seen Roadsta for their collaboration, which closely resembles the silhouette of an Air Max model. Despite this, it’s the colourway rather than the shape of the shoe that’s the main attraction here. The entirety of the upper is decked out in a shimmery, metallic like material – and it looks great.

The upper is constructed of several panels, and features Bape’s iconic star logo on the side. The silver colourway is rounded off with a clean and thick white midsole, and the perforated toe box is also a nice touch. It’s nice to see a Roadsta used for a collaboration as they’re so rarely seen, and especially on a collaboration of this calibre.

We’ve also received the news that a line of apparel will be dropping alongside the shoes, including a sports cap, branded T-shirt and a full-zip shark face hoodie. The collection as well as the sneakers are set to drop on the third of February, via STAMPD’s website and their LA flagship store.

Where to buy a pair of STAMPD x BAPE Roadsta