8 of the Coolest Houses in the World

We all have dreams of living in some other reality, with unfathomable amounts of money and houses that are just unimaginable. Well while that reality might not be coming anytime soon (or ever) for some people, it is the world they live in. We have scoured the Internet for what we think are some of the coolest money-can-buy houses on the planet. From apartments in New York City to a tree house in South Africa, these are the places we’d move to if we had unlimited funds.

Home envy is one of those things that we all get, and living in some of the houses out there is simply an unrealistic pipe dream. Across the world there are houses that have been designed by some of the best architects in the field, specifically for the small selection of people who can afford them among us. We have trawled through the various types on the Internet and have given you a small number of the ones that we think are up there with the coolest ever to have been constructed.

We apologise in advance for the envy we are about to induce in you, but we are completely with you there. These is our pick of some of the most amazing houses and homes in the world. These have been designed and crafted by some of the world’s best architects, from Malen Voster to Frank Lloyd Wright.

This modern house in Tokyo is not for someone who wants privacy, but that still doesn’t stop us from wanting to get our foot in the door. The purpose of the 914-square-foot house was to let in as much natural light as possible (which it does) and has been built in the same way as a tree house. It consists of layers of living space, contained within a glass frame. Associated with the concept of living in a house built within a tree, the airy interior comprises of 21 individual floor plates. These are all situated at various heights, reflecting the way in which tree houses are built on branches.

Sou Fujimoto explained when asked about his design that, “the intriguing point of a tree is that these places are not hermetically isolated but are connected to one another in its unique relativity. To hear one’s voice from across and above, hopping over to another branch, a discussion taking place across branches by members from separate branches. These are some of the moments of richness encountered through such spatially dense living.”

The house hides all its plumbing and storage in the thick back wall, while the rest is completely open. Curtains have been put up in order for some privacy, but apart from that the whole property is completely visible from the outside. The interesting thing about the house is that it could be described as one room, or several rooms. The open space, but layered design means it could serve the function for one room of guests or several different areas for activities. 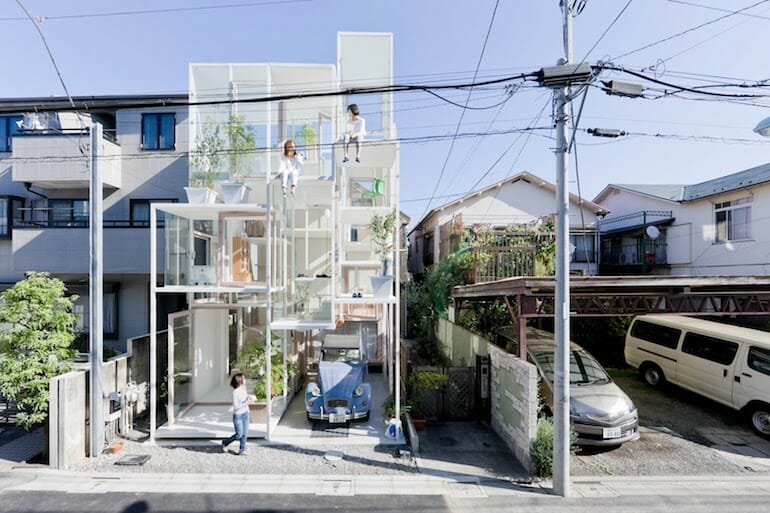 This is one of the best apartments that money can buy and is situated in one of New York City’s best neighbourhoods, Brooklyn. Taking residence over three floors, the penthouse sits (obviously) at the top of the iconic clock tower building and features a unique backdrop of the four famous 14 ft glass clocks encircling the apartment, offering one-of-a-kind, 360-degree view like no other in the city.

Ceilings span 16 to 50 ft and a custom, glass-enclosed, three storey private elevator and architectural wraparound stairway mean this is ones of the most luxurious apartments in the world’s most famous city. The master suite offers you views of lower Manhattan, and the en-suite bathroom allows you to sit in the tub and gaze over at Manhattan Bridge and the Statue of Liberty. Two additional bedrooms with private bathrooms, a recreational space, a sky roof cabana and open deck complete this incredible property. The rooftop area gives you unbeatable views from The Verrazano Bridge to the Empire State Building. The only downside to this apartment is that it comes in at a hefty $15,000,000.

This is undoubtedly one of the best new-builds of the 21st Century and has aptly been given the name ‘Billionaire’, which may seem a little grandiose and almost tacky, but is wholly necessary. This 38,000-square-foot property ostentatiously sits in the luxurious Bel Air area of Los Angeles and was originally listed at $250 million. The property features 21 bathrooms, a helipad, a bowling alley, an infinity pool overlooking the city, and ten “oversized and VIP” (as described by the estate agents) guest suites, although whatever that means is anyone’s guess.

It is the most expensive house for sale in the United States and is the pinnacle of luxury, suitable only for the richest of the rich. It is undoubtedly one of the most amazing buildings in Los Angeles. 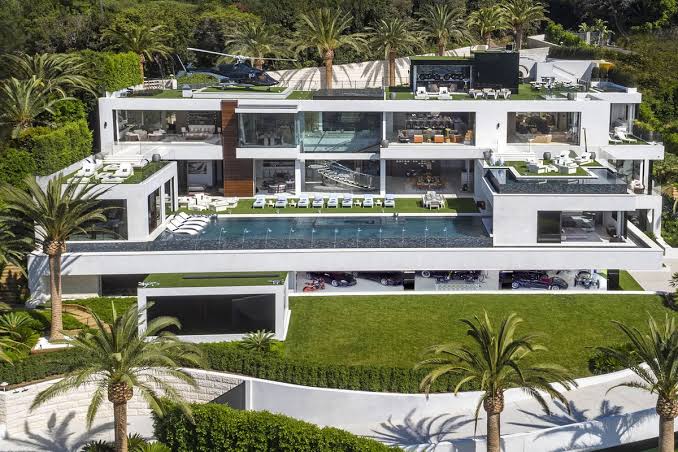 Fallingwater is the house designed by American architect Frank Lloyd Wright for Edgar Kaufmann in southwestern Pennsylvania and it hangs over a waterfall. There was not enough land and so the architect had to restructure his ideas. The house sits in harmony with the nature surrounding it and when it was completed it unsurprisingly began a new chapter in American architecture. It has been hailed as Wright’s greatest work, for he was first and foremost an architect of houses, and he paved the way for other architects. Due its location, it is one of the best designed houses in America and is visited by thousands of people each year.

When you look on any list comprising of the biggest, most extravagant or most expensive homes in the world, you can guarantee almost instantly that The Manor will be on it. It is located in the Holmby Hills area of Los Angeles and stands as the largest home in the Los Angeles county, which is no mean feat.

It was originally created for television producer Aaron Spelling (famous for shows such as Dynasty, Charmed and Beverley Hills, 90210) back in 1988, but is now owned by Petra Eccelstone (although she is in the process of selling it). The Manor is a French chateau-style mansion with 123 rooms and 56,000-square-feet, which in the grand scheme of things is pretty large. The house includes a screening room, gym, bowling alley, three rooms for wrapping presents, four two-car garages, tennis court and pool, as well as a parking lot that accommodates 100 vehicles. There are also 16 carports for all your cars.

The house is so famous and iconic that it has even been referenced in popular culture. In the movie Legally Blonde, Elle Woods (Reese Witherspoon) described her social standing by saying, “I grew up in Bel Air, Warner. Across the street from Aaron Spelling.” This is undoubtedly one of the world’s most amazing houses. 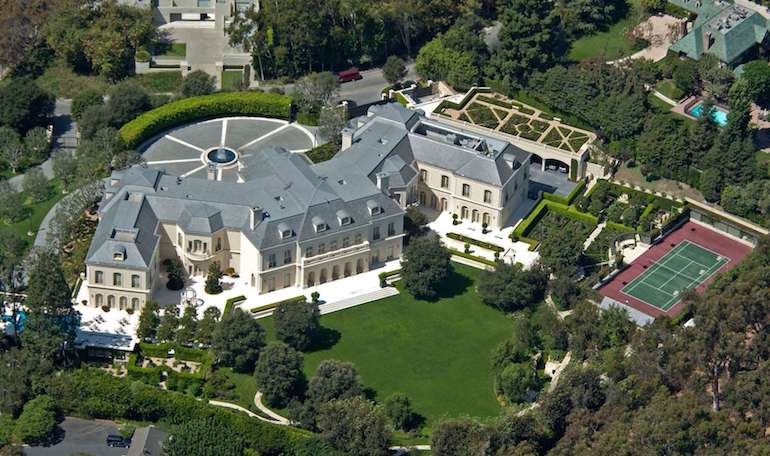 The penthouse at 432 Park Avenue is the highest residential spot in the Western Hemisphere. Towering up to 1,396 ft, the skyscraper offers 104 apartments at 30,000-square-feet each, but the real diamond is the penthouse. Rafael Viñoly designed the tower and it took three years to construct.

The penthouse sits on the 95th floor and is the highest residence available to be purchased. 8,255-square-feet, with six bedrooms, seven bathrooms, 12 ft ceilings, a wood-burning fireplace, two powder rooms, a large library, and room for a grand piano 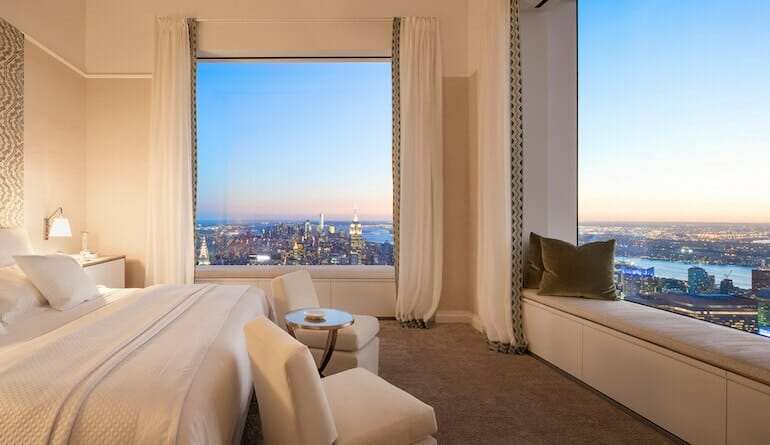 Situated in Cape Town, this house takes the idea of a children’s play house and twists it for suitable living. Each side of the house has been divided into three modules, with two of them dictating the diameter of a circle on the four sides of the square, thus providing with a pinwheel-type concept.

It is an extremely interesting concept and every thought has been put into its design. Level one is essentially the living level. The second floor is home to a bedroom, and the third features a roof deck. Below the residence, which is actually at ground level, is where you can find a plant room. Elsewhere the half round bays, which are built into the architectural design, feature a patio, dining alcove and stair on the living level, a bathroom on the bedroom level, and a built-in seat on the roof deck level so you can really be at one with nature. This is one of the best and most interesting houses money can buy. 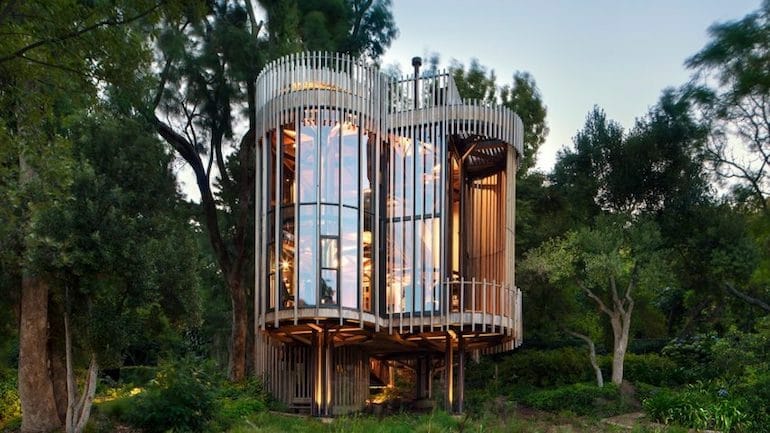 This is one of the most talked about residential listings in New York City and unsurprisingly is also one of the most expensive. Dubbed “the pinnacle”, it finally went on the market for $110 million after the top three floors of the iconic Woolworth Building, which is one of the city’s most iconic and coolest buildings, went under renovation in 2012.

While it is one of the most talked about developments, very little about the property is actually known. So far, only images of the outside a floorpan of the 9,710-square-foot residence have been revealed, with the inside being kept a mystery.

The penthouse takes up the terracotta-clad crown of the building, which previously housed the Woolworth Building’s mechanical equipment. In order for it to be liveable, Alchemy Properties had to carry out extensive work on the building, replacing 3,500 pieces of damaged terracotta on the facade. The penthouse will comprise of the top seven floors of the building, and if it meets its asking price, it will become the most expensive residence in the city. Incredible refurbishments don’t get better than this.

Above we have given you eight of the coolest residential properties in the world. From penthouse apartments in New York City to tree house inspired designs in South Africa, as well as the houses built on waterfalls in between, we have given you our pick of our favourites. While you probably couldn’t afford any of these, there’s no harm in dreaming right?