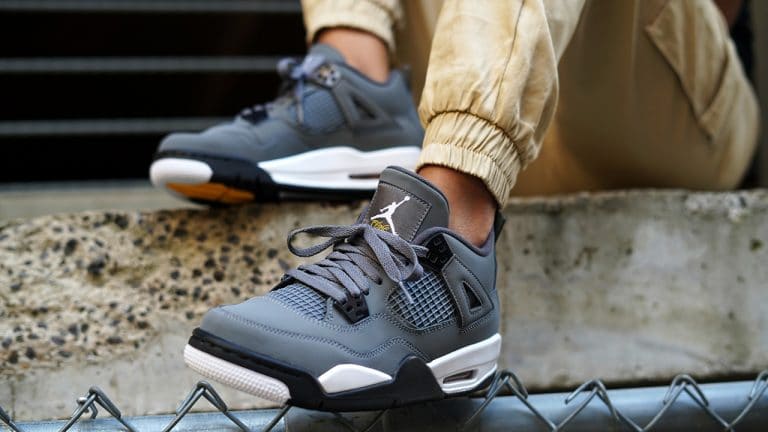 Let’s face it, trainers are a big deal. While once upon a time they were worn purely for sports, nowadays trainers are ruling runways and streets across the world. What brands like Balenciaga, Gucci, Nike and Adidas come up with is always a hot topic and we highly anticipate what they are about to release. Here we go through what we think will be the big trainer trends in 2018.

Whether you look at high end trainers or trainers you can simply buy on your high street, you can guarantee that the latest trainers trends will transcend both ends of the spectrum. ‘What are the latest trainer trends?’ you ask and we are here to tell you. We have forecasted what we think will be big in 2018 and the new trainers concepts that we reckon we will be seeing. Below we have tried to fathom what the industry trends will be, from a continuation of the dad shoe phenomenon to the rise of hybrid models.

Inevitably the trend that saw the trainer industry through 2017, the dad trainer, will continue throughout 2018. The likes of Balenciaga and Gucci have already released their takes on the dad shoe for the coming year, and the Autumn/Winter 2018 menswear collections proved that the trend will continue right up until the end of the of the year – probably into 2019 as well.

So what exactly is the dad trainer trend? Well basically, anything you think your dad may have worn back in the Nineties. Now however, chunky trainers that you would have once frowned upon are now gracing the runways and high fashion with their presence. Brands like Balenciaga and Gucci have been stalwarts in making sure this has become one of the key trends for the past few seasons. Raf Simons, too, with his Adidas collaboration has been instrumental in foreseeing this – the Ozweego trainers that have become immensely popular essentially define the must-have dad shoe silhouette.

The dad shoes quickly became the ‘cool trainer’ of 2017 and it doesn’t look to be slowing down anytime soon, with the likes of Puma and Umbro releasing their own versions. Some have, inevitably, seen this as one of the worst trainer trends in recent years. 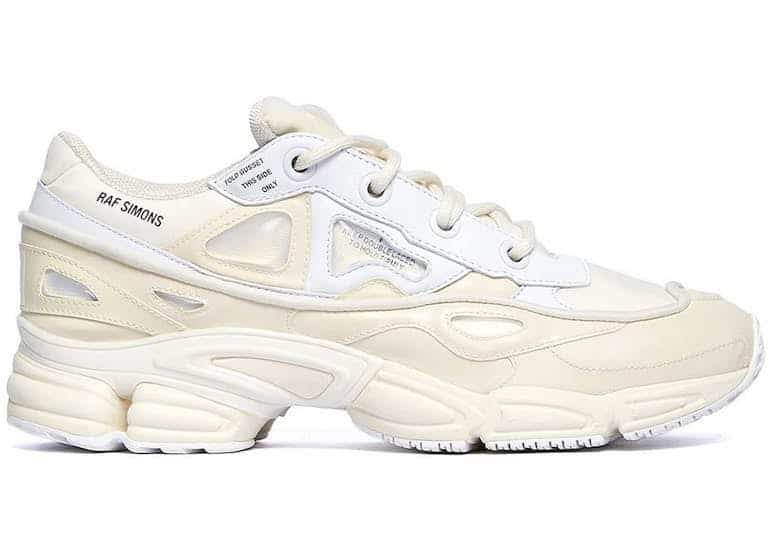 After debuting in November 2016, Balenciaga’s Speed trainer quickly became one of the most highly sought after shoes of the year. This was particularly thanks to a rise in Instagram phenomena (queue the Kardashian-Jenner clan) and several rappers (Gucci Mane, Bryson Tiller, Future) wearing them. The silhouette is somewhat farfetched and is not exactly everybody’s cup of tea.

More than 12 months later however and the ribbed double-knit jersey socks with a terry towelling lining and a wavy rubber sole have sold out worldwide. We expect this to continue well into 2018 and have already been replicated by brands such as Nike (LeBron XV), Under Armour (Curry 4) and Adidas (Crazy Explosive 2017).

The Nineties always influences fashion and this does not seem to be going away anytime soon. In 2017 the biggest resurgence was definitely that of the Nike Air Max 97, which has become one of the most popular shoes of the year. This saw not only a re-release of the original colour way, but also the creation of different colour ways.

In addition to this, brands that were huge in the Nineties like Fila and Reebok have seen a surge in popularity, largely thanks to collaborations with higher end brands Gosha Rubchinskiy and Vetements. We expect this to continue as brands like New Balance really come to the fore.

There are plenty of trainer releases slated for the coming year that more than suggest that the hybrid trainer is going to become one of the biggest trends. The biggest indicator of this is the release of the Nike Air Vapormax Plus which is essentially a hybrid between an Air Max Plus and the Vapormax which was released last year for the first time. The Vapormax midsole, with its semi-deconstructed design, brought Nike’s legendary Air Max technology into the modern day and has really given Nike a new standing when it comes to the trainer industry. The Nike Air Vapormax Plus was first teased at the end of 2017 and the hype surrounding the trainers will for sure continue throughout what is left of 2018.

Ever since Converse teamed up with Tyler, The Creator on a line of pastel trainers, we have seen a surge in the popularity of coloured trainers. While box-fresh white and black are still ruling the roost, we cannot deny that there has been a rise in how many people are wanting to wear and are indeed wearing pastel trainers. We definitely think this will become one of the best trainer trends of 2018. 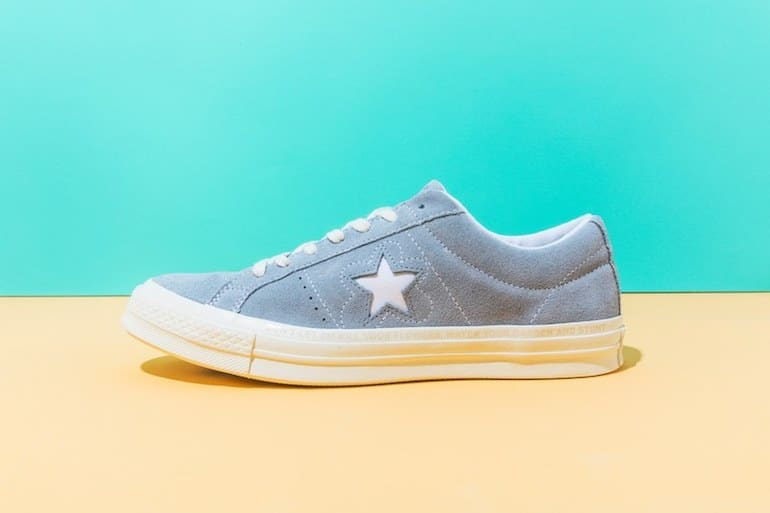 We expect this to become a huge trend in the trainer industry. Balenciaga was the first major name to create hype around a pair of trainers that were colour blocked in 2017 with its Triple S in the red, yellow, blue and grey colour way, and now it looks as though other brands are following suit. Nike have given its Air Max 95 silhouette the colour block treatment in recent months, while Umbro is about to release a dad sneaker in a purple, yellow and blue colour way. Rainbow coloured kicks seem to be all the rage right now. 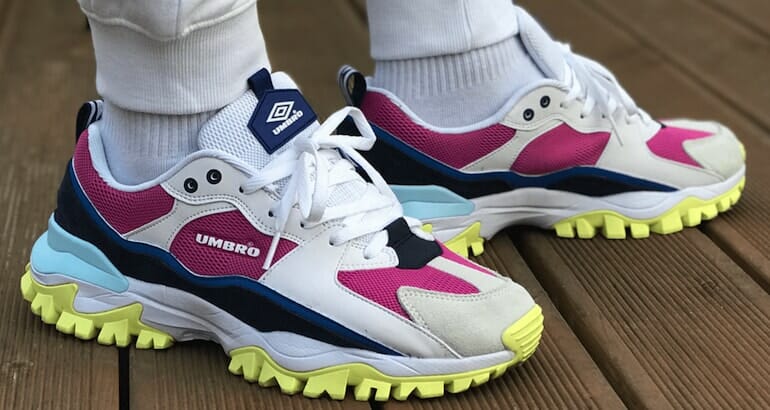 Exaggerated soles have been everywhere thanks to the dad shoe trend and we doubt they will be going anywhere this year, apart from on your feet. Louis Vuitton and Nicholas Ghesquiere set the benchmark when it comes to thick soles when they unveiled the brand’s Spring/Summer 2018 collection and put a pair of new runners down the runway. 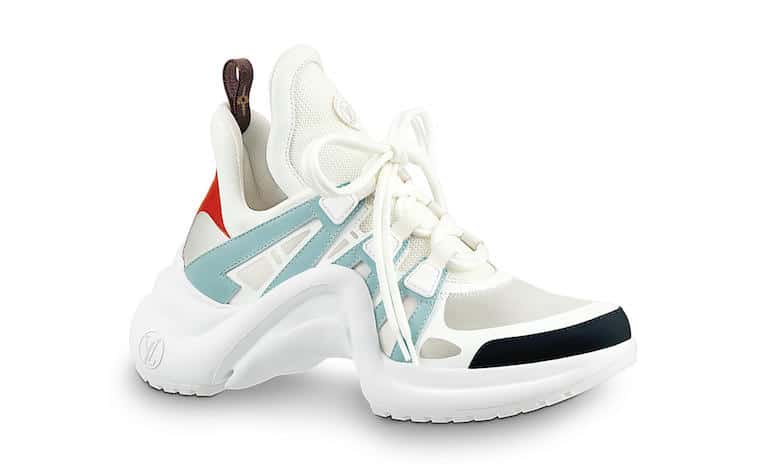 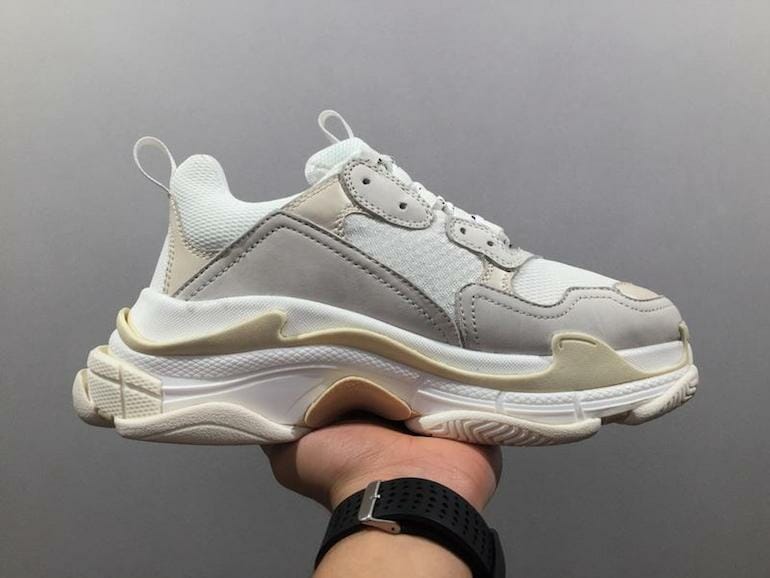 What people wear on their feet is now just as talked about as the clothes they wear. Above we have highlighted what we think will bet the biggest trends when it comes to what you are wearing on your feet in 2018. From thicker and more exaggerated soles, to a continuation of the dad sneaker trend, you can expect more chunky shoes than ever before to grace the street.

Shop Trainer Trends to Watch Out for in 2018