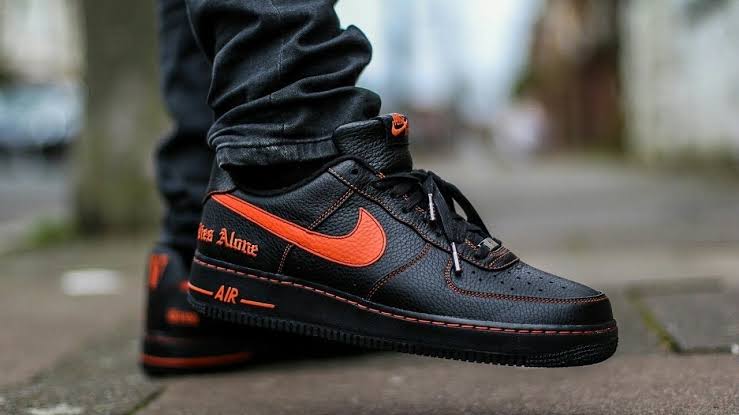 The Air Force 1 was the first ever Nike Air model released, and that alone makes it pretty iconic. Over the years countless different variations and colourways have launched, and it’s become a sneakerheads favourite. We’ve put together a comprehensive guide of the best colourways ever.

Since its introduction to the sneaker market in 1982, the Air Force One has had unprecedented and unrivalled success. It’s a wardrobe staple for a lot of people, however some limited releases can set you back literally thousands. We’ve selected our favourite releases of the past 35 years and put them into an easily accessible list.

Love them or hate them, Supreme NYC are without a doubt the biggest streetwear brand on the planet. They have a long and prestigious history of collaborating with Nike, and the collaborations are always straight fire. This camo edition sold out instantly and now resells for almost double the price.

Japanese based brand CLOT are another company that has a long history of collaborating with Nike. The recent CLOT x Vapormax seems it may have been inspired by this model? Featuring a bright red upper with amazing detailing and a visible air unit in the sole, what’s not to love about these?

Famous LA based tattoo artist Mister Cartoon recently collaborated with Nike again for a collection of Cortez models, but what he’s really known for in the sneaker scene is these Air Force 1’s. They originally released in 2005 and have been a staple in any serious collectors collection ever since.

Officially classed as a Lunar Force 1 rather than an Air Force 1, this collaboration with tech wear brand Acronym deserves a spot on the list regardless. Featuring a deconstructed design, a lunar sole and an innovative zipper system, when it released the market hadn’t seen anything quite like it since. Fast forward two years and it’s an extremely desirable sneaker after the rise of Acronym as a brand.

These released as part of the launch of Jay-Z’s Black Album in 2003, and they were just as – if not more – hyped than the album itself. Releasing in very limited quantities, sneakerheads all over the world were queuing out the door to try and get their hands on a pair of these monochromatic sneakers.

Nike released these around about the time A Bathing Ape started pumping out Bapesta’s in multicolour schemes. They re-released in a very similar colourway earlier this year also titled “Easter Egg”. They feature easter egg branding on the tongue and are still a desirable release today.

Yet another collaboration with Supreme makes the list, this time it’s a high top edition with heavy Supreme branding across the strap. Coming in black, white and red, each colourway was extremely bold and stand out. It was a huge hit with both sneakerheads and streetwear fans, however some complained it was too “bait” and obvious.

Potentially the newest release on this list, the Air Force 1 Jewel features a very innovative and original Swoosh. It released in two colourways, and off-white and salmon pink, and both were huge successes.

A friends and family only release, the Air Force 1 Shady Records was a collaboration with world renowned “Rap God” Eminem. Featuring Shady Records branding on the heel and Eminem’s logo on the front of the shoe, along with a monochromatic colourway, a lot of sneakerheads would love to own a pair of these.

Launching in Japan only way back in 2001, for a long time these were some of the most sought after AF1’s. They re-released in 2016 and were the same massive success then. The colourway is an awesome pale pink and brown, and combined with the white midsole they really pop off.

One of the most luxury Air Force 1’s to ever release (hence the name “lux”) these full leather crocodile skin AF1’s are certainly a statement. One for the more mature sneakerheads who have the confidence to rock these, if you can do it right you’ll certainly turn a few heads.

Another 2017 release that makes the cut is Nike’s collaboration with ASAP Bari’s brand VLONE. Featuring bold orange detailing, a full leather upper and “Every Living Creative Dies Alone” branding on the rear of the shoe, these had sneaker fans queuing overnight outside Nikelab locations around the globe.

Inspired by the hit US TV show of the same name, the Entourage has been a mainstay in a sneakerheads collection since it’s launch 11 years ago. Featuring bold graphics and a baby blue colour scheme, in the present day they do look a little dated, but the OG’s still love them.

A completely patent leather collaboration with Sony, these AF1’s are certainly loud and will get a few heads looking towards your feet. Released around the time the Bape were killing it with the Bapesta’s, these were a big deal. Basically Nike showing Bape that although they could try their best to steal the target market, they’d never get close.

An impressive three-way collaboration released earlier this year, this release sold out instantly via both Nike and Supreme’s online stores. Featuring abstract branding across the upper of the shoe, fans had mixed opinions when teaser images were first released, however they were a huge success.

Featuring a premium white leather upper and subtle yellow detailing, this release is a flawless colourway. The LA branding is subtle but not too subtle, and blends in to the rest of the colour scheme perfectly. Branding is also seen on the tongue, which makes for a nice touch. The colourway actually re-released in 2016 and was a huge hit then too.

Graffiti artist KAWS is pretty well known for his collaborations with Nike, his Air Max 90’s and recent Air Jordan 4’s are among the big hitters in the sneaker world. These Air Force 1’s are slightly less notorious, however still feature KAWS’ signature XX branding and fluorescent green colour scheme.

Black on black is a classic, goes with everything and a solid look. The colourway was released almost 20 years ago and is still a classic today. These trainers are a favourite for young sneakerheads to wear inconspicuously with their school uniform, and if you haven’t owned a pair at some point in your life, are you really a sneakerhead?

The wheat colourway is a total banger, especially in this high top edition. It sold out instantly across all retailers, and a hype was created. This specific edition actually resold heavily initially, but after several re-releases the market calmed down. The whole model is constructed from premium quality materials and is extremely durable.

Not quite the original, but most definitely the best. You can’t beat white on white AF1’s – they’re everything a sneaker is supposed to be. They may not be covered in elaborate patterns, or be a head turning colourway but they do exactly what they’re meant to do and perfectly.