The 14 Best Fashion Collaborations of All Time 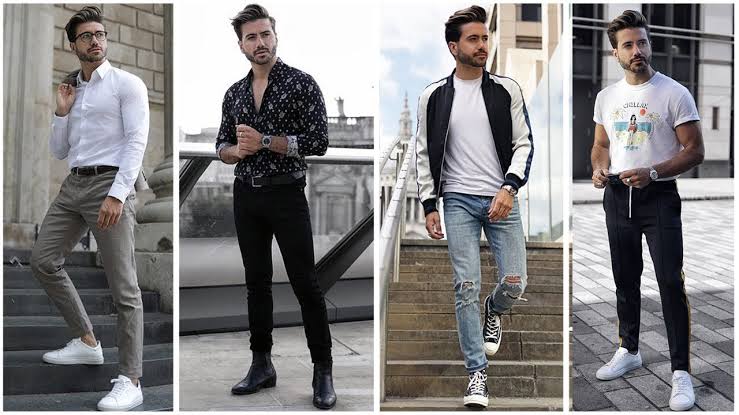 While collaborations in the likes of music and art have been around forever, the fashion collaboration has basically defined 2017. Once upon a time, brands were simply rivals and wouldn’t work together. Now it seems like even the most unlikely of brands are willing to work with another, from Supreme and Louis Vuitton, to Vans and The North Face. Here’s our pick of the best collaborations of all time.

Lanvin, under the direction of creative director Alber Elbaz, teamed up with Scandinavian Acne Studios in 2008 on a collection that had both brands’ fans fought to get their hands on. At first the pairing came as somewhat of a surprise and nobody really believed that it was happening. That was until lookbooks started to appear which showed a blend of Acne’s denim intelligence and Lanvin’s cool Parisian aesthetic.

The result was a collection of coats, dresses, shoes and bags, all made from the finest Italian and Japanese denims and fabrics. Of the collection Jonny Johansen, Acne’s founder and creative director said “Alber when we first met was talking about denim with such love. He said denim is like a perfume – you never throw it away, you keep it and treasure it. What I found really inspiring in this collaboration was working with the street element of denim and the couture shaping of Lanvin.” The collection was such a success that the two brands decided to continue putting out lines until 2011.

Moncler teamed up with NYC-based tailoring maverick Thom Browne in what at first was deemed an unusual pairing. Before long, however, it seemed to be a natural coming together. Moncler Game Bleu takes Browne’s unique tailoring vision and combines it with Moncler’s athletic expertise. Tailored trousers were given a side-zip treatment that Moncler would usually put on snowboarding trousers and fitted bomber jackets that feature the classic Thom Browne red, white and blue stripe. The collaboration is now an ongoing project, with Browne consistently reimagine Moncler’s designs with tailored wools and fabrics meeting Moncler’s functionality and practicality.

From 2010 to 2013, A.P.C.’s Jean Touitou and Arnaud Faeh of Carhartt Work In Progress put their heads together and brought out three collections that heavily focused on the latter’s workwear heritage. The collab saw the creation of plenty of corduroy, carpenter trousers, leather jackets, twill and so on. The collaboration saw the release of three capsule collections which featured new riffs on Carhartt’s duck jackets, as well as on A.P.C.’s classic denim. The collaboration was a huge success, with Touitou and Faeh consistently stating they had little care for marketing and PR and that it was all down to fans’ just loving the collaboration.

H&M’s yearly November drop of a collaboration is now one of the most sought after and hotly anticipated fashion lines of the year. 2011 saw the Scandinavian brand team up with Donatella Versace, one of the biggest women in fashion, and fans were granted exactly what the H&M designer collaborations promised. The collection saw classic Versace pieces reimagined, coming at lower prices. The collection was pretty loud and was worn by the likes of Kanye West (naturally) – he favoured a varsity jacket which can only be bought on resell sites for ridiculous prices. Other items included more garish and very Versace pieces, sitting alongside more tailored and smarter looks. Definitely one of the best and most hyped H&M collaborations of all time.

It’s rare that a pairing like this comes along and it still stands as one of the best collaborations to date in the fashion industry. In 2003, Adidas approached the legendary Japanese designer to design a pair of trainers which were then limited to 50,000 pairs worldwide. The success and instant selling out of the trainers led to the continued collaboration between the two that is now known as Y-3 (Y” referring to Yamamoto and ‘3’ in reference of Adidas’ three stripes). 14 years on and the collaboration is still going strong and is still blurring the lines between fashion and athletic wear.

This was undoubtedly one of the most-hyped collaborations to date. At first it was teased and rumoured through Instagram before Kim Jones finally announced that it was happening. Presented in January 2017 as part of Paris Fashion Week Men’s, the collection saw Louis Vuitton’s famous monogram blended with the Supreme logo across a range of apparel and accessories. Notable pieces included a red trunk worth over £75,000, a denim shirt with a mixture of Supreme and Louis Vuitton details and scarlet bags. Streetwear quite literally had never been so hyped, but retail prices were those of Louis Vuitton and so it wasn’t just anybody who could get a piece of the collection.

Neighbourhood has been going since 1994, when Shinsuke Takizawa opened the first store. That same year James Jebbia opened Supreme’s first store in New York. While the two brands were somewhat different (Neighbourhood favoured bike culture whereas Supreme was very much skatewear-centric), when the two came together as a collaborative force, the results were natural and pretty magnificent. In 2006, the two brands released a collection which saw Supreme’s box logo T-shirts get the Neighbourhood treatment – a skull and crossed swords design emblazoned across the chest, as well as leather jackets and selvedge jeans.

This was a collaboration that was rumoured for some time and finally in 2017 it came to be a reality. Earlier in the year, Supreme and Nike collaborated on the Uptempo and then a further release included a collaborative Nike Air Humara in four colorways: black, lime green, aqua blue and fuschia. The trainer featured Nike’s classic technology, including a Phylon midsole with Air-Sole heel unit and a Zoom Air forefront unit, finished off with a Supreme logo on the toe. To match the shoes, the October release was rounded off by a collection of jackets, pants and hats in the same colour ways.

Jil Sander is without a doubt one of the greatest designers of our time. Her minimalist designs and cutting-edge fashion was sorely missed when she retired, but when she came out of retirement and partnered with Uniqlo on a collection of accessible clothing, fans rejoiced. The collection was labelled ‘+J’ and was more of an ambitious project that sat perfectly within both Uniqlo and Jil Sander’s repertoire, rather than a try hard collaboration aimed at causing a stir.

Virgil Abloh’s Off-White began gaining momentum as a serious brand in 2016. This was the year that the label teamed up with mega-brand Moncler for an Autumn/Winter collection that was inspired by the fishermen of the North Sea and titled ‘O’. The collection was a series of heavy-duty pieces – jackets with detachable hoods, waistcoats that look like life jackets and oversized trousers with elasticated waistbands – made from MAC which was used in Royal Navy uniforms in the Nineteenth Century. This first iteration of the two brands’ ongoing partnership featured (of course) Abloh’s recurring stripe motif.

For Spring/Summer 2017 the pair were at it again, this time with a whole new vibe and collection. The collection was a whole lot brighter and branding was stepped up a notch.

From 2005 to 2012, BAPE and Marvel put their creative heads together a number of times. The first collection was a line of T-shirts and sneakers featuring characters including Thor, Iron Man, Silver Surfer, and the X-Men. A few years later, a Spiderman capsule collection arrived and then following that was one involving The Avengers. What made this an ingenious and excellent collaboration was how the two brands packaged the shoes – they came in the same way that you get action figures.

Simply put, Alexander Wang came in and flipped the Adidas logo on its head – quite literally. We are now on two seasons and it is better than ever, with hopefully more to come. It took almost ten years for the collaboration to actually come about and the way it was executed was pretty epic. Wang had a truck go round major cities, selling the collaborative gear from the back of it.

Following on from collaborations with the likes of Kappa, Adidas, Fila and Reebok, for Spring/Summer 2018 Gosha Rubchinskiy unveiled a Burberry hook up. Introduced as part of his Spring/Summer 2018 rave-inspired catwalk show in St Petersburg, the collaboration saw Burberry’s classic pieces reimagined to suit Rubchinskiy’s vibe. Boxy jackets, plenty of Nova check and of course trench coats will be arriving in early 2018.

The Robert Mapplethorpe Foundation reached out to Raf Simons about a collaboration, and the legendary designer scrapped his entire Spring/Summer 2017 menswear collection in favour of an ode to Mapplethorpe’s work. Raf Simons made sure that every look featured a print of a Mapplethorpe photo, while all styling reflected the themes of his work without compromising Simons’s own aesthetics – it was a masterpiece to say the least.

Collaborations have no become the hottest thing in fashion. Supreme and Louis Vuitton caused one of the biggest stirs earlier this year when they collaborated on a complete collection and it looks as though the trend isn’t going to end anytime soon. The hysteria and hype surrounding a rumoured collaboration has meant that designers and brands have been banking in on them. We reckon 2018 will be the year we see more than ever and can’t wait to see who else hooks up.