101 Best Air Force Tattoo Ideas That Will Blow Your Mind! 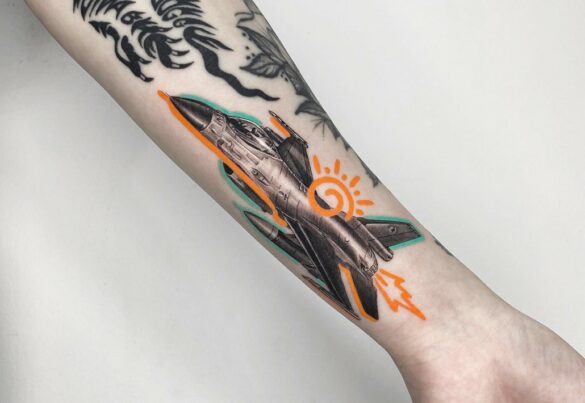 Air Force tattoos are a popular choice among those who have served or are currently serving in the Air Force, as well as those who have a strong connection to the military branch. These tattoos can be a tribute to the service and sacrifices of the Air Force, or a symbol of the values and ideals that are important to the individual. Some common themes for Air Force tattoos include planes and other aircraft, patriotic symbols, and the Air Force logo. Some people may also choose to get a tattoo that represents a specific mission or experience they had while serving in the Air Force. Ultimately, the meaning behind an Air Force tattoo is personal and can vary from person to person, but they are often a source of pride and a way to honor one’s service to their country.

If you’re considering getting an Air Force tattoo, you’ll be happy to know that the policy for 2021 is fairly relaxed. Airmen are now allowed to have more tattoos covering a larger portion of their body, including full or half sleeves, a single ring tattoo on one hand, and even tattoos on their feet. While there are still some restrictions, such as no tattoos on the face, neck, head, lips, or eyelids, overall the policy is quite liberal. So if you’ve been wanting to show your pride and honor for your service with a meaningful tattoo, now is a great time to explore your options and find a design that speaks to you.

When it comes to Air Force tattoos, the possibilities are really endless. Whether you want a traditional design or something more creative and unique, there is sure to be a tattoo that fits your style and celebrates your service in the most meaningful way. Here is a list of some of the best air force tattoo ideas:

A great way to represent the power of the Air Force is with a fighter jet and wing tattoo. This type of tattoo often features a detailed rendering of a plane as well as wings, symbolizing the strength and courage of those who serve in the military.

This type of tattoo typically features a silhouette of an old-school fighter jet and its pilot. It’s a beautiful tribute to the brave men and women who have served in the Air Force and is sure to spark conversation among other military enthusiasts.

This tattoo typically features an airman in the cockpit of a plane with their hands on the controls. It’s a gorgeous way to represent the dedication and courage it takes to be an Air Force pilot and pay tribute to all those who have served.

This tattoo features a fighter jet with the iconic shark-mouth design, which is said to have originated in World War II. It’s a great way to pay homage to the brave pilots who served during this time and show your appreciation for their service.

A chest tattoo is a great way to show off your Air Force pride. This type of tattoo often features an eagle, symbolizing power and freedom, as well as other patriotic symbols such as the American flag or a bald eagle.

A tiny Air Force badge tattoo is a great way to honor your service without going overboard. This type of tattoo typically features the Air Force symbol and is usually placed discreetly on the body, such as the wrist or ankle.

If you’ve had a favorite mascot during your time in the Air Force, why not get it tattooed? This type of tattoo is a fun way to pay homage to your service and show off your spirit for the nation.

An eagle with freedom tattoo is a great way to represent your Air Force service and the freedom it has provided you. This type of tattoo usually features an eagle in flight, symbolizing power and liberty, as well as other patriotic symbols such as stars or stripes.

This tattoo typically features a cloudy sky with a fighter jet flying through it. It’s a beautiful way to represent the journey of life and the courage it takes to serve in the Air Force.

This is a popular tattoo among Air Force personnel, as it symbolizes the commitment to serve with honor and courage. It’s a beautiful way to show respect for those who have served and sacrificed so much for their country.

This type of tattoo typically features an Air Force badge with a parachute and plane, representing the courage and bravery it takes to serve. It’s a great way to honor your service and show your pride for being part of the United States Air Force.

There are many different options for Air Force tattoos, and the best one for you will depend on your personal style and what holds special meaning for you. Some popular ideas for Air Force tattoos include the Air Force symbol, military aircraft, and slogans or mottos associated with the service. These tattoos can be small and subtle, or large and intricate, and can be personalized with meaningful dates, names, or other symbols. Other options for Air Force tattoos include patriotic designs, such as the American flag or the words “liberty” or “justice,” or more abstract designs that symbolize strength, courage, and determination. Ultimately, the best Air Force tattoo is one that speaks to you personally and represents the values and experiences that are important to you.

Are tattoos allowed in the Air Force?

Yes, tattoos are allowed in the Air Force, but there are some restrictions. Tattoos that are deemed offensive or those that promote extremist ideologies.

Which branch of the military doesn’t allow tattoos?

The US Marine Corps historically banned tattoos but the rules have been relaxed. They have shifted the focus to the content of the tattoo. You are not allowed anything that is associated with drugs, gangs, extremism, or that are obscene, indecent, sexist, racist, or discriminatory in any way. This includes tattoos that advocate racial, gender, or ethnic hatred or intolerance, or that advocate violence or unlawful behavior.