10 of the Coolest Swimming Pools in the World

While we are big fans of hotels, houses and all things architecture. One thing that often goes overlooked and underappreciated is a good swimming pool.

We have trawled through endless hotel sites to find the best of the best when it comes to swimming pools. These are the coolest swimmings pools in the world in our eyes and are placed across the world at some of the best hotels and resorts. From the infinity pool at Marina Bay Sands to (what can only be described as the most Instagrammed swimming pool ever) that famous pool on Bondi Beach, we have carefully curated a list that shows only the coolest swimming pools ever. Wouldn’t it be nice to have one of the following in your back garden?

When it comes to infinity pools there really are none in the world that can top the one at Hotel Caruso in Italy. Set on a diff ledge 1000 feet above sea level, the hotel is one of the most serene escapes on the planet and has an unrivalled view of the Amalfi Coast, which itself is one of the most desired travel destinations in the world.

Often described as ‘a private balcony over the Amalfi Coast’ and you literally will feel like you are in some otherworldly, heavenly realm. Suspended 350 metres above the sea, the swimming pool is the jewel in the crown of this hotel. The expertly designed infinity pool is situated at the highest point of picturesque Ravello and you will feel like you’re about to slide off and down the cliff edge (although there is no chance of this).

Open to the public all year round, the pools have been a tourist attraction for over 100 years. There is a larger adults pool as well as a children’s pool and both give the idea that you are swimming in the sea, because of their location directly in the sea bed. 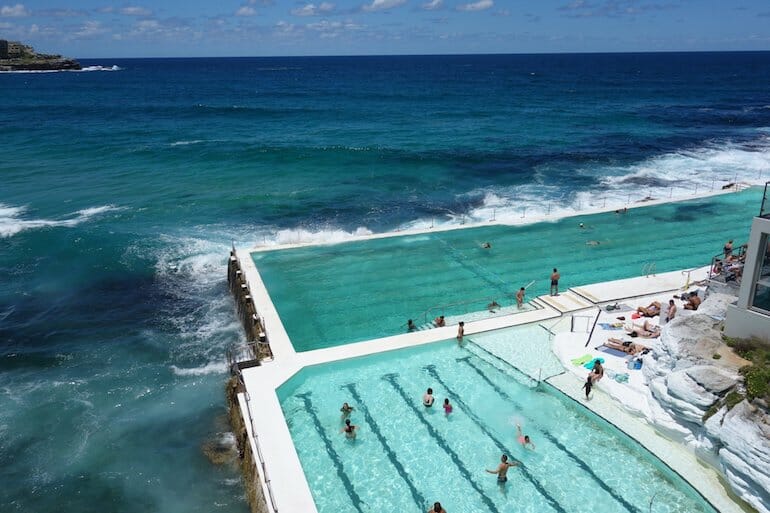 As far as cool swimming pools go, this is up there with the very best. The five-star hotel is one of the best in the city and has been crafted to suit the most luxurious of needs. It is one of two gothic high rises on Main Street in the Texan city, and while it is an architectural delight both inside and out, the rooftop pool is what we are really interested in.

The hotel has garnered acclaim for its 10th floor pool that essentially cantilevers eight feet over the easement below. it is unlike any other pool and quite literally sticks out from the top of the building in a sort of way that appears to defy gravity. The architect of the project was ARCHITEXAS and it has quickly become a tourist hotspot (if you do ever plan to stay there, be warned that it is opened to the public on weekends). Alongside the unique rooftop infinity pool sits a bar. 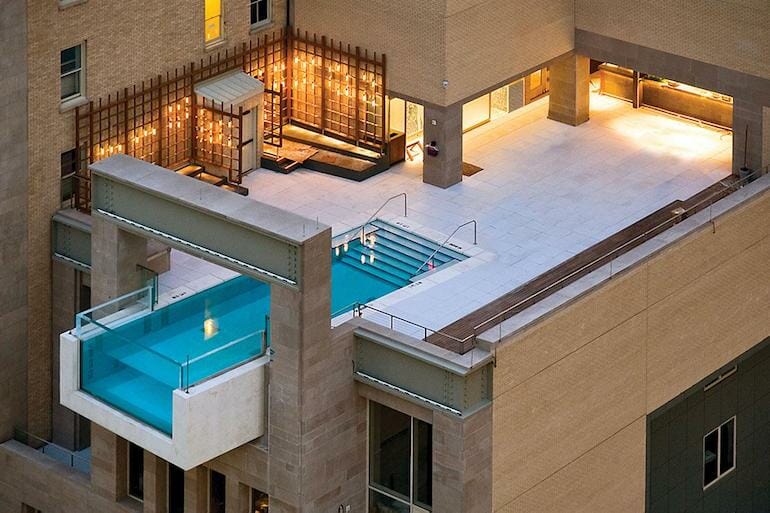 Singapore is a must-visit place, hands down. It has some of the best architecture, best bars and culinary delights and most interesting museums, shopping centres and parks. For us, nothing says Singapore quite like Marina Bay Sands – it is the place you’re most likely to recognise when searching for the city on the Internet.

The gigantic hotel is a fine piece of architecture and resembles three huge pillars atop which sits a 340 sky park which is large enough to accommodate 3900 people. Designed by architect Moshe Safdie it really is worth a trip up to the 57th floor where you’ll find the world’s largest infinity pool. The pool looks over the rest of Singapore and offers jaw-dropping views. The pool is the longest elevated iteration the world has ever seen and its 142 metre length spans the length of the sky park and is three times the size of an Olympic pool. It is such a popular spot (although we must say it isn’t cheap) that is has garnered its own hashtag on Instagram (#marinabaysandspool). 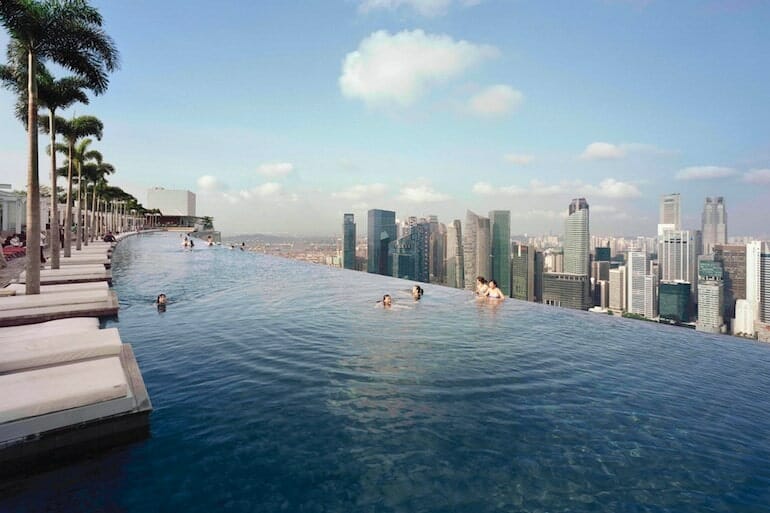 The pool at the Golden Nugget hotel in Las Vegas is quite literally something else. The swimming pool sits in a complex space which features different areas. The Tank as it is called and known by features a 200,000 gallon shark tank, through which you can water slide on one of the world’s best and most unique slides. The location of the pool and slide not only makes this one of the cool swimming pools with slides, but probably the best. You will honestly feel like you are swimming amongst sea creatures, which in case you’re wondering, is not actually the case, but it is near enough. As you’d expect from Las Vegas, the pool is by and large one of the most expansive in the world and as well as the tank, there are bars and waterfalls galore. 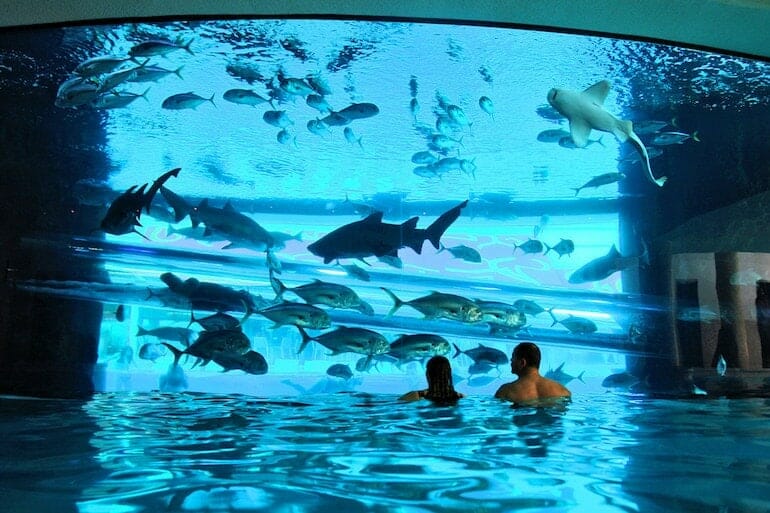 San Alfonso Del Mar is a private resort in Chile, featuring no hotel, just apartments. Its swimming pool is the main attraction and at the time when it was built it was the largest in the world. The gigantic pool is 1,013 m (3,323 ft) long and covers 20 acres). It containing around 250 million litres of seawater, which has been pumped from the Pacific Ocean, filtered and then treated for suitable use.

The pool was developed by Fernando Fischmann and his Chilean company Crystal Lagoons built the pool. It opened back in December 2006 and as said, at the time, was the largest pool in the world. While it cannot be known the exact cost of the gargantuan swimming pool, early estimates put the total cost of construction at around the US$3.5 million mark for the filtration system alone.

Katikies Hotel is located on one of the most-loved Greek islands, Santorini. It is renowned for its unparalleled services, atmosphere and warmth. The best thing about the five-star hotel is its swimming pools. One has been carved into one of the calderas on the island the cave pool is literally an oasis away from the hub of the hotel. As well as this the hotel has an infinity pool situated 300 feet above the Aegean Sea. 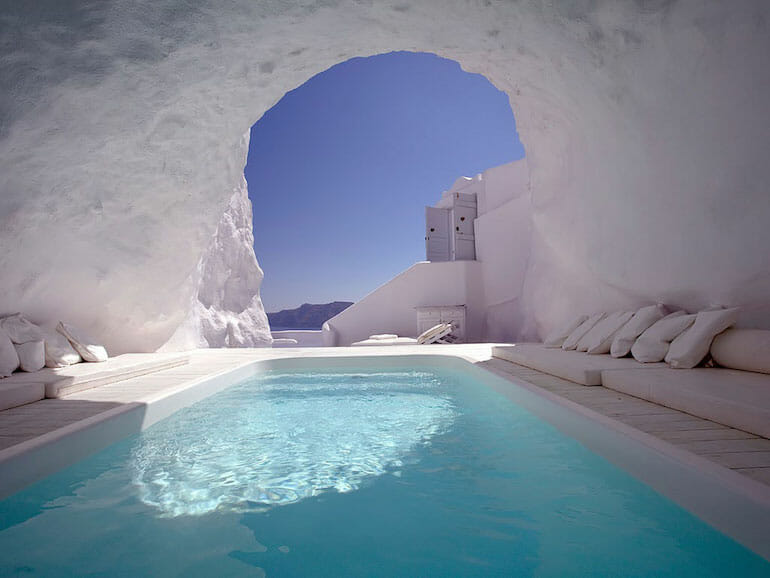 Although this was demolished in 2017, it still deserves a place on this list. Its sheer size was unimaginable and the Polynesia-themed Ocean Dome stood as part of the Sheraton Seagaia Resort, measured 300 metres in length and 100 metres in width, and was listed in the Guinness World Records. The Ocean Dome sported a number of unusual features that you probably would not have found at any other pool. This included a simulated flame-spitting volcano, artificial sand and the world’s largest retractable roof, which provided a permanently blue sky even on a rainy day. The air temperature was always held at around 30 degrees and the water temperature was always at 28 degrees. 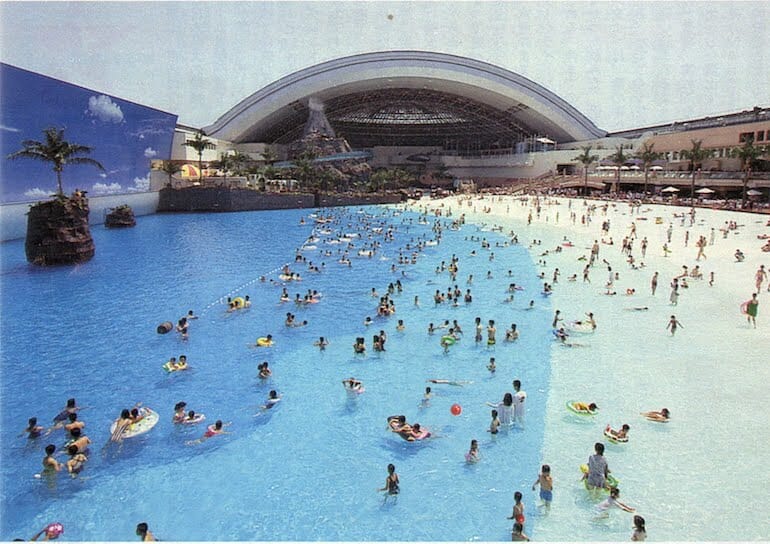 Nemo 33 is not your typical swimming pool, but it’s pretty cool nonetheless. It previously held the record as the deepest swimming pool in the world. The pool’s maximum depth is 34.5 metres (113 ft) and it contains 2,500,000 litres of non-chlorinated, highly filtered spring water maintained at 30 °C.

The complex stands in Belgium and was designed by Belgian diving expert John Beernaerts. Its purpose is not for public use, but instead it is used as a facility where divers can practice, some recreational use and for films. 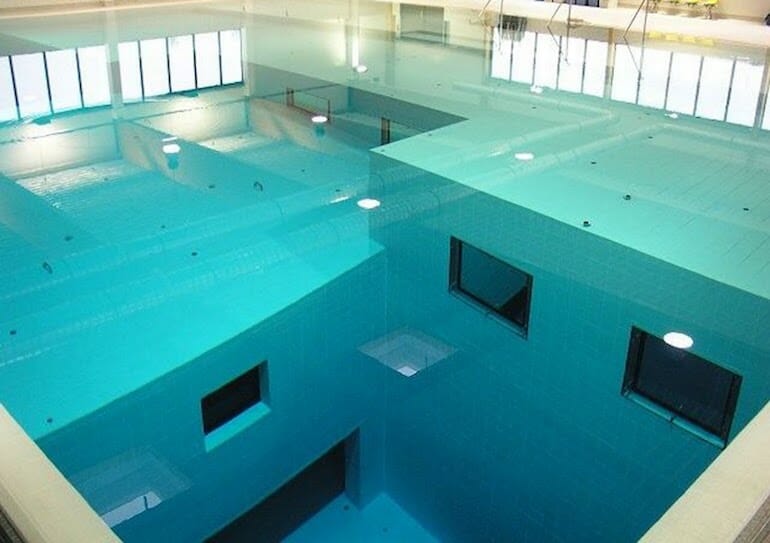 This is one of the most luxurious hotels in the world and it has a swimming pool to match. Crete is a land of extreme culture, notably of myths and music, poets and painters. Add one of the world’s top archaeological sites, Knossos and a plethora of the Mediterranean’s best beaches and you’ve got an excellent travel destination. Amirandes Grecotel takes all this into question.

Its Olympic sized swimming pool has been expertly crafted and doesn’t look like it belongs in this world. It is filled with seawater and is fit for a king. Just take a look at the picture and you’ll gather this for yourself.