The 10 Best Sneakers & Trainers for Men

What were once canvas covered, rubber-soled shoes worn by people in the 18th Century are now fashionable men’s sneakers seen on the feet of men strutting down both the runways and city streets around the world. Over time, practicality has been shifted to make way for style in this multi-billion dollar industry and we have rounded up the 10 best trainers of the moment.

When British company J.W. Foster and Sons created the first running shoe in 1895 they had one thing in mind – a shoe that would make it easier for athletes to compete in their respective sports. Their design was taken a step further by Spalding in 1907 with the design and production of the basketball trainer. It was not until the 1950s that good quality trainers began to appear on the feet of school-aged children. By the time the millennium dawned, trainers were appearing in every day life and companies began to market them as a lifestyle choice instead of a sports necessity.

Today, trainers come in hundreds of styles, colours and brands – from casual to couture. Companies such as Nike and Adidas are known for their casual, athletic trainers, worn on the feet of sports stars such as LeBron James and Serena Williams. Yet during fashion week, trainers can also be spotted on the feet of models strutting down the runway, representing brands like Chanel and Christian Dior.

Both on the court and off, trainers have become a staple in the wardrobe of men. Their choice of trainer can both define their style and reveal much about their personality. From the aspiring athlete to the businessman to the fashion forward fellow and everyone in between, there is a trainer, a colour and a style for them all. From the 1800s to present day, trainers have changed in quality and design, but the hype over the coolest trainers has only increased.

It was in 1825 that two brothers, James and Cyrus Clark, began to dabble in the idea of designing and creating the best shoes. In the beginning, their product was sheepskin slippers, but the idea quickly began to develop and morph depending on demand and incoming styles around the world. Needless to say, their company was an instant success.

Today, over 105 pairs of Clarks shoes are sold every minute around the world. Clarks Original trainers are known for their comfort and style. Spotted on the feet of Pharrell Williams and Robert Pattinson, these have soon become the most stylish trainers going. They look their best paired with distressed jeans and a brightly coloured T-shirt – casual and cool. 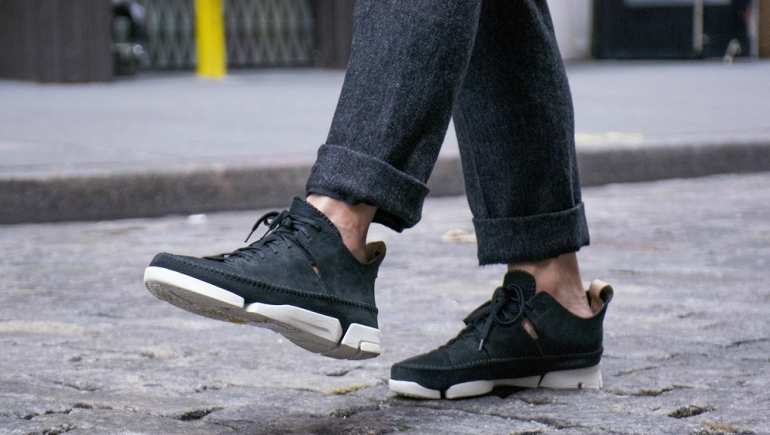 This company began as a small hosiery shop in the Champagne region of France, opening around 1882. The owner had a passion for sports and wanted to make equipment that could be worn and loved by all. The brand has now become one of the world’s most prestigious brands, renowned for its clothing, footwear and sporting equipment.

Designed in partnership with Arthur Ashe, the court trainer is a perfect way to complete any fashion forward outfit. Whether in black or white, the leather finish on this trainer makes a statement all of its own. Yet, the simple design makes it extremely versatile. The combination of both great textile and design are what make these some of the best men’s trainers around. Pair the Arthur Ashe court shoe with a pair of trousers and a simple white shirt for a dressed up look or channel extreme comfort by pulling the court trainers on with joggers and a graphic tee.

The All-Stars were created in 1917 by the Converse Rubber Shoe Company. The materials and structure were intentionally combined to create a basketball trainer for a professional league. Chuck Taylor joined this league in 1921 and became sponsored by Converse. While working with the company he made suggestions to improve the shoe, wanting to increase flexibility and provide more support. This is when the All-Stars began to also be known as “Chuck Taylors”.

All-Stars have been worn by the likes of Olympians and American soldiers, and have become a trend for many musicians and artists. They are available in many colours, as well as various heights, including the well known hi-top. There is a Chuck Taylor trainer for everyone, which could be the reason why 60% of all Americans have purchased a pair of these shoes.

Over the years, the popularity of this trainer has skyrocketed, ensuring their spot on this list of the coolest trainers and most comfortable trainers ever made. Chuck Taylor All-Stars can be paired with almost every outfit for a trainer that gives you both comfort and classic style. 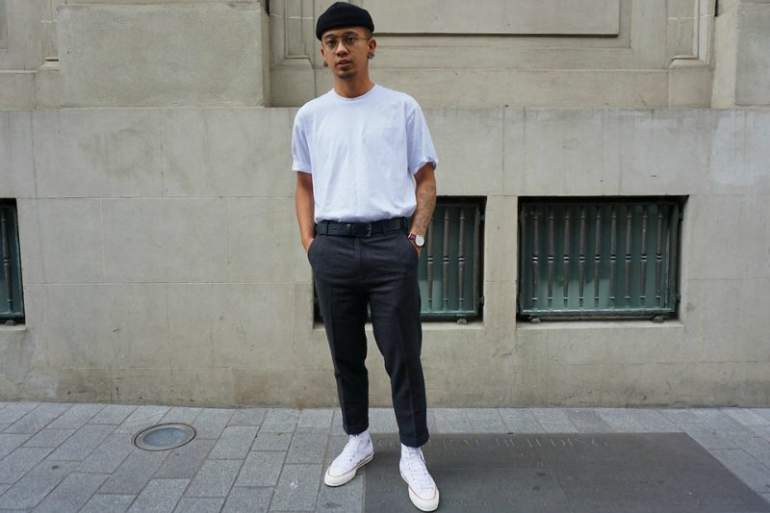 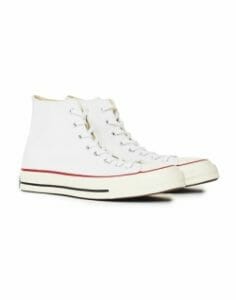 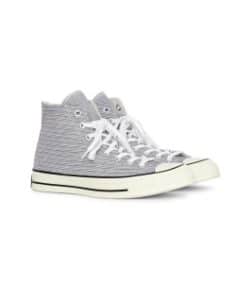 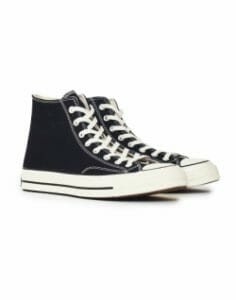 Italian brand Superga has been creating shoes since 1911. While it has branched out over the past one hundred years, Superga was originally known for its best tennis shoes, including the 2750 Classic which was introduced in 1925.

Made of canvas and rubber in multiple colours, the 2750 Cotu Classic is lightweight and timeless. They are the perfect trainers to pair with joggers and a hoodie to run weekend errands or take a risk and pair them with a formal shirt and trousers. 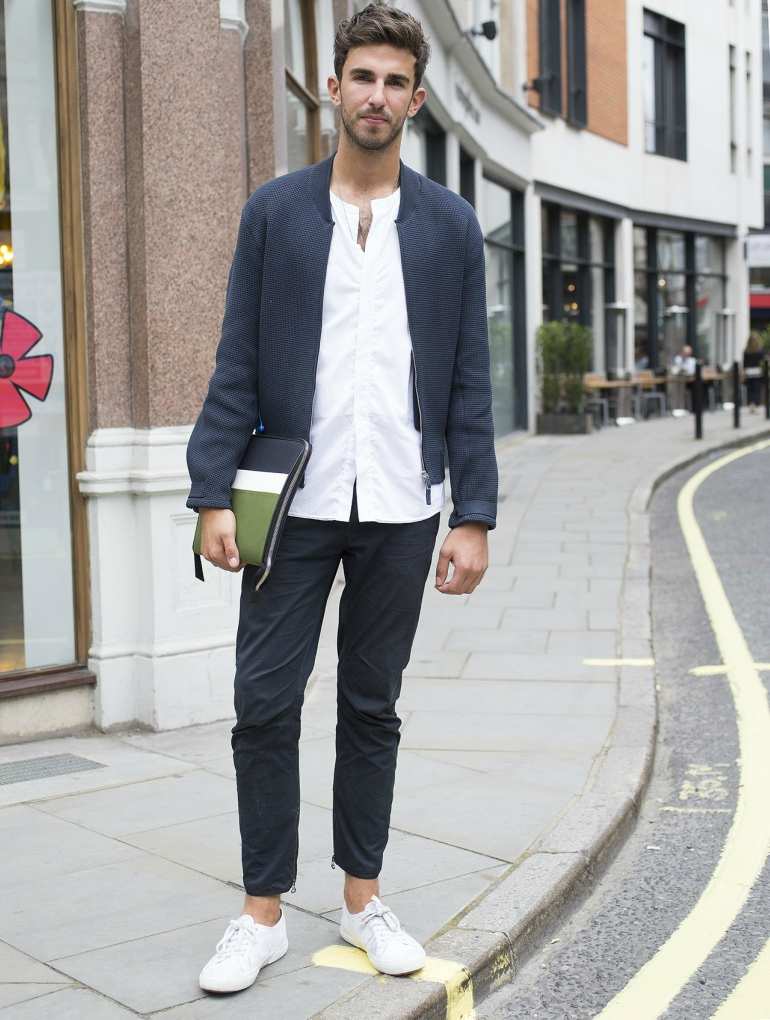 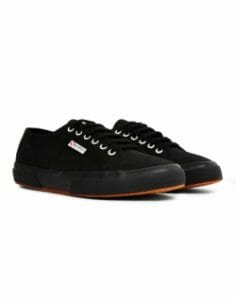 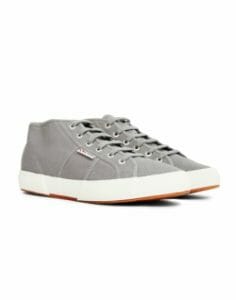 Keds was founded in 1917, and while they wanted to name the company “Peds”, it had already been trademarked, but “Keds” was close enough. The all-American brand became the first to mass-market a canvas top trainer. Today, Keds has become a diverse company with shoes of all textures, styles and colours, but the Keds Champion remains its most popular trainer.

The Champion trainers are great for sports such as skateboarding where the support is less important than the style. Once again, it is the versatility that make these trainers one of the best. They can be paired with casual clothes, fit for outdoor exploring or a day at the skate park. Yet, they can also be the perfect accessory for a night out on the town, taking simple trousers and a button up to a whole new level. 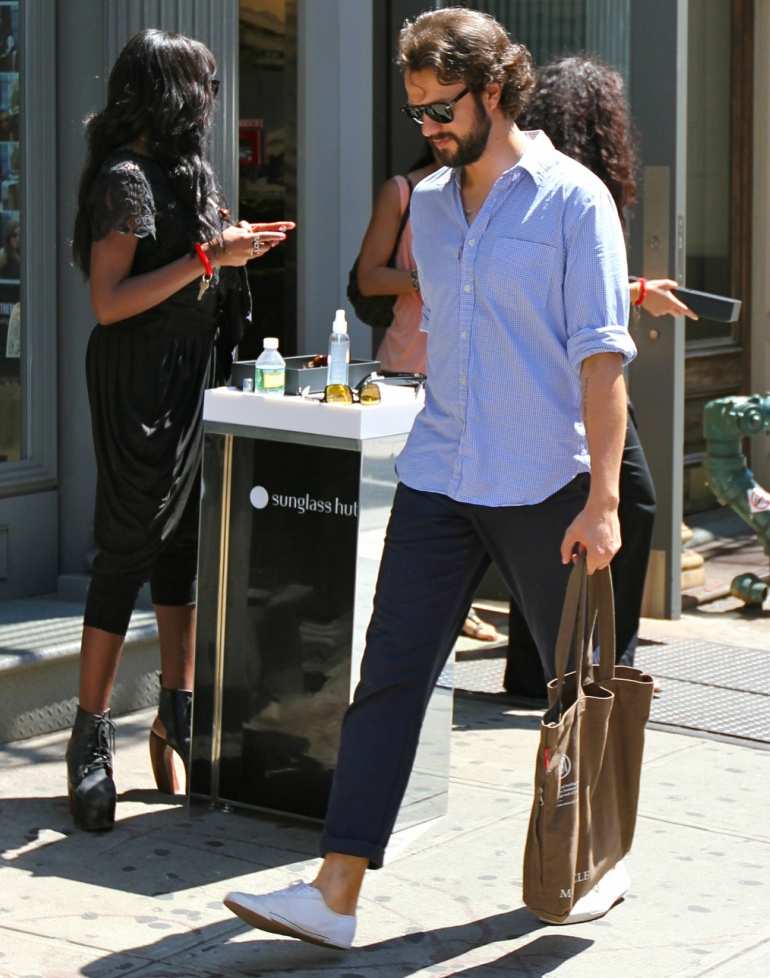 As the second largest sportswear manufacturer in the world, it’s natural that a pair of Adidas trainers made their way onto this list. The Adidas Superstar was released in 1969 and, like the majority of Adidas products, boasts the trademark three parallel lines. In the 1970s, this trainer became the official shoe of the NBA and has been given many nicknames such as “shelltoe” or “sea shells” due to the rubber shell on its toe.

The Adidas Superstar trainer has been worn by many big names, beginning with Kareem Abdul-Jabbar. In the years following, the trainer would be seen on the feet of Run-D.M.C., Andy Murray, David Beckham and, most recently, Kylie Jenner and Gigi Hadid. Their clean lines and various colours allow both men and women to rock this style and make it all their own. To really make your Adidas Superstar trainers stand out, throw any colour on with a pair chinos and a simple T-shirt. 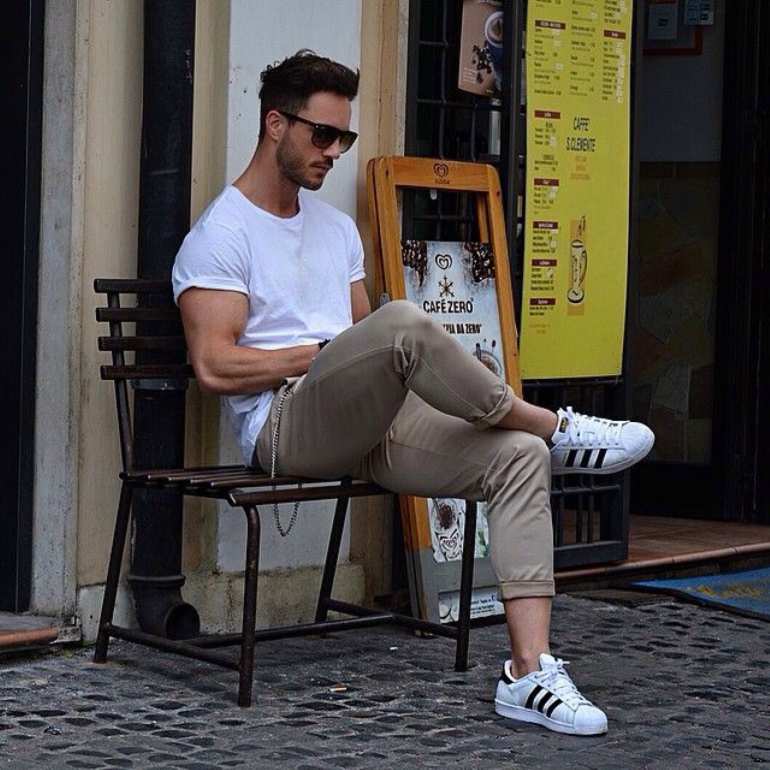 Created under the Nike brand name, this trainer was actually designed by basketball player Michael Jordan. Although they were produced for Jordan in 1984, they were not released to the public until the following year. Since then, multiple variations of this trainer have been produced and sold by the thousands, and have been known to be the best trainers ever made. Andre Johnson, Derek Jeter, Dwayne Wade, Drake and even Bugs Bunny are among the many teams, athletes and celebrities that have been sponsored by Air Jordan.

Unlike the trainers previously listed, the Air Jordan has a much less versatile look. The hi-top design and rubber textile give the Air Jordans a tougher feel, perfect for streetstyle. This trainer is updated every few years to ensure that its design stays trendy and that its hype continues to rise.

These cool and comfy trainers are often seen complementing “hip hop” type outfits. This could include baggy jeans, sweaters, graphic tees and even accessories like a watch or chains. 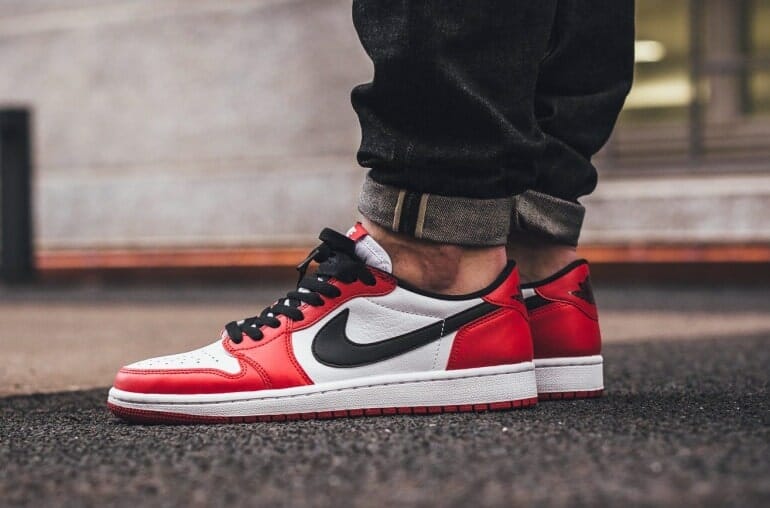 In 1966, four men, including the Van Doren brothers, opened up the Van Doren Rubber Company in Cypress, California. These shoes, now known as Vans, are some of the coolest trainers ever made and were immediately adopted into the skateboarding community and anyone who was a “real skateboarder” would be seen wearing Vans. The company even built its own skatepark in 2014 in Huntington Beach, California – a place for their fans to enjoy the shoes and the sport.

The defining feature of these shoes, what puts them on the list of the coolest trainers, is that they do not have laces. Instead, they were designed with two sections of elastic so that the wearers can slip them on and go. Vans Slip-Ons also come in many colours and patterns, including the very well known black and white checked. The Van Doren brothers managed to create an extremely simple shoe that many have attempted to replicate, but nothing is as versatile and attractive as the original. 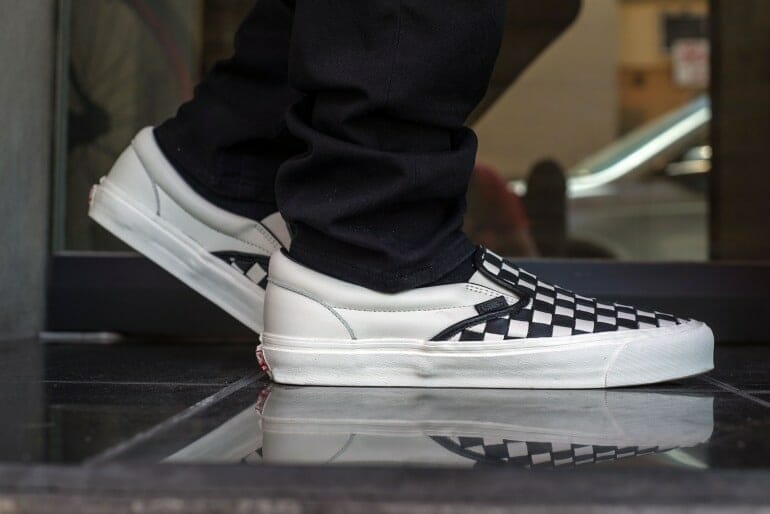 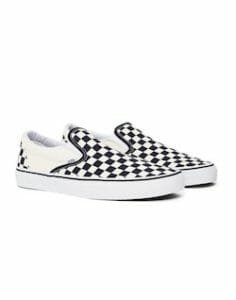 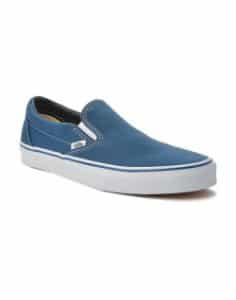 Another iconic trainer from Adidas, the Stan Smith has had a revival in recent years to become a staple trainers in may men’s wardrobes. The ongoing trend of mixing formal and casual together is still apparent in menswear, and the Stan Smiths are the perfect choice to team with a formal look.

Originally created in 1971 for tennis star Stan Smith, they feature a smooth leather upper with the iconic Adidas triple stripes perforated into the sides. Their use for sports has become obsolete with new technologies, so the trainer took a little bit of a back seat, but as soon as the street style stars started to sport them, they soon became some of the most popular trainers to date. 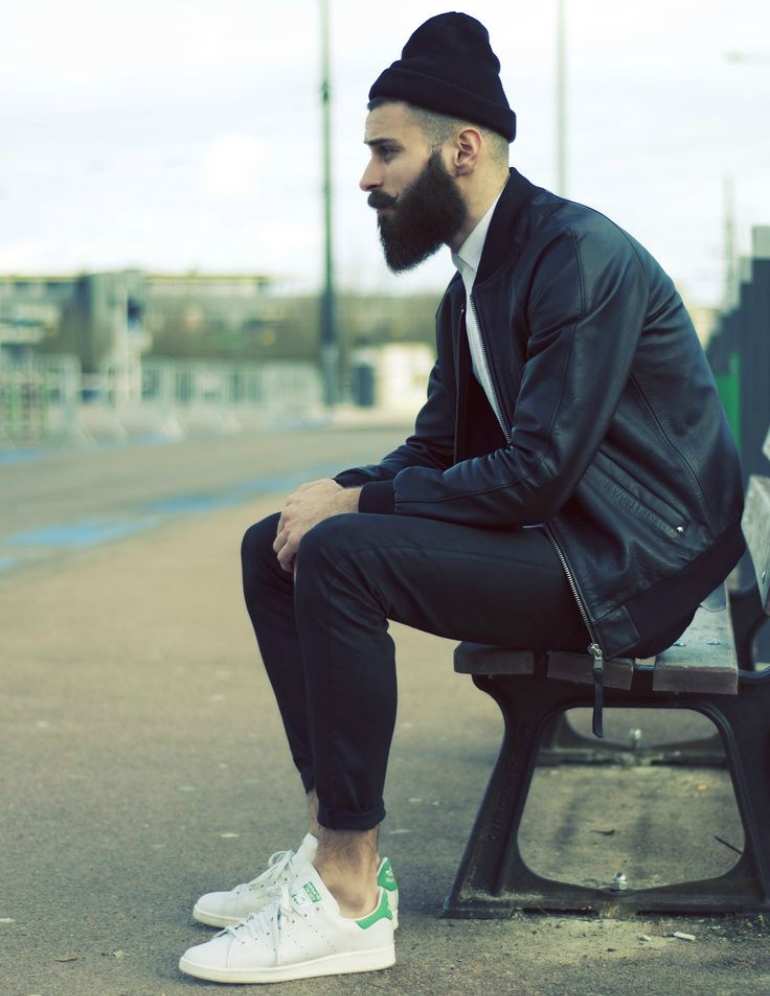 Another classic trainer that has had a resurgence over the last few years is the Vans SK8 Hi. Originally created in the 1970’s, and formally known as the ‘Style 38’, the SK8 Hi trainers was revolutionary when they first hit the market because of their cushioned high top ankle support and soon became the best high tops around and the best looking trainers.

Skaters and extreme sports competitors alike wanted a shoe that protected their ankles whilst practising and competing. The Vans SK8 Hi offered them this and with varying colourways and materials now on offer, it’s no wonder why people are going mad again for this practical and stylish trainer. 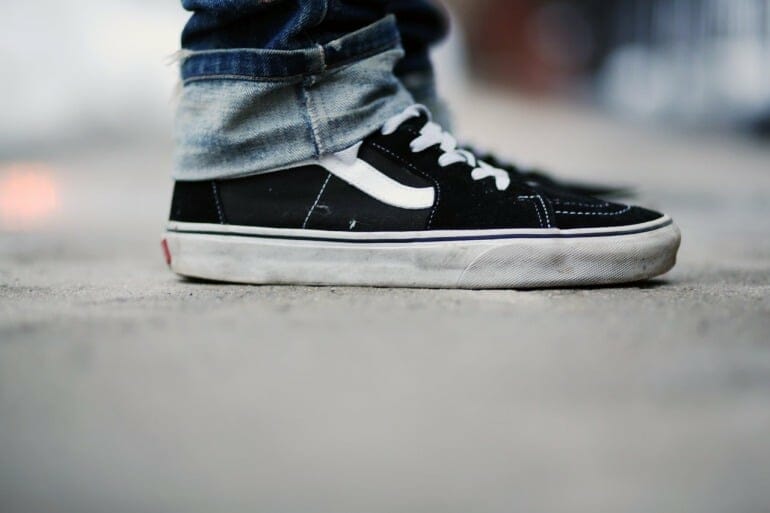 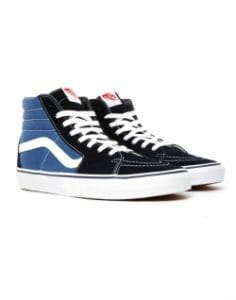 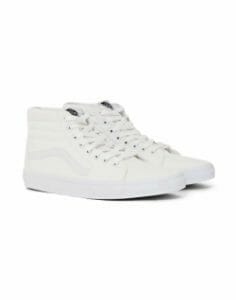 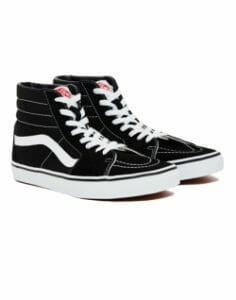 How to Wear Trainers and Sneakers for Men 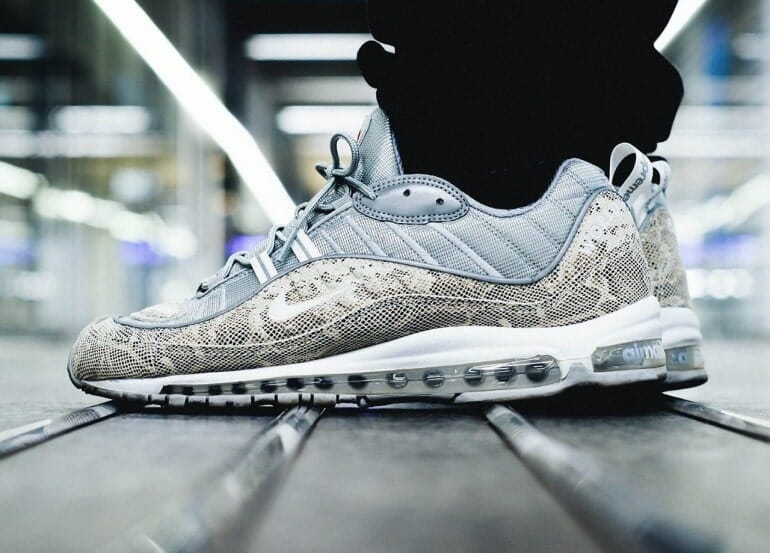 There is a trainer out there for every man. By searching, each can find a colour, design and style that suits his outfit and personality. This list is just a taste of the trainers available today, and some of the best sneakers we have to offer – with these ten pairs, you can’t go wrong. Whether you are slipping on a pair of Vans to run to the market or tying up your Air Jordans to head off to a Drake concert, remember that the coolest trainers are so much more than a piece of sports equipment – they are a statement and one that every guy needs to make.