10 Best Clone Wars Tattoo Ideas That Will Blow Your Mind! 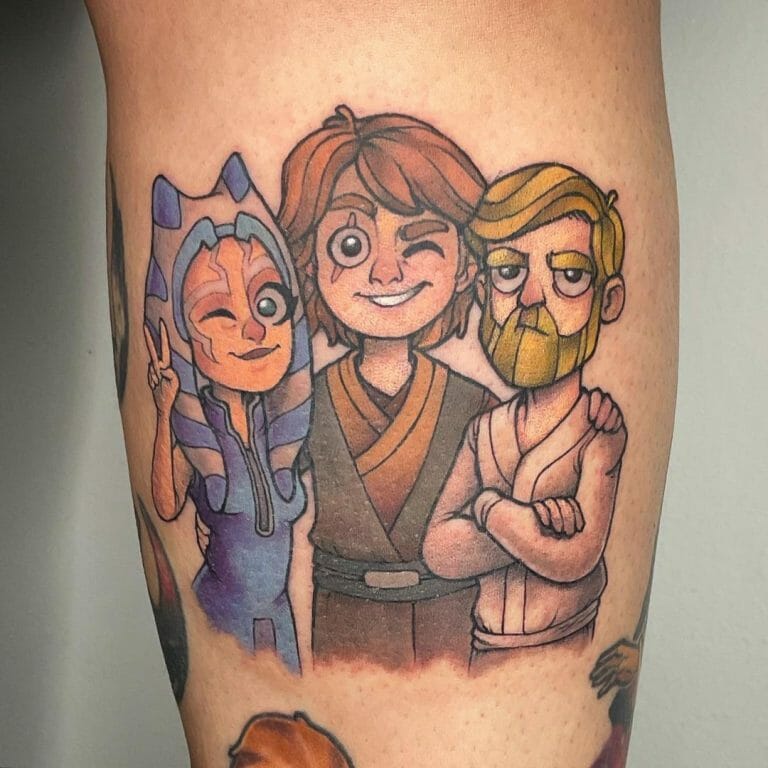 Are you fan of the Star Wars universe looking to get inked? Then check out the 10 stars wars and clone wars tattoo designs that are out of this world!

People go crazy for Star Wars and Clone Wars stuff and styles and images. Star Wars: Clone Wars was an animated series that started in 2008. A movie was released under the same name, followed by the animated series on Cartoon Network. It was a reboot of the previous 2D series with an identical name and it ran for seven seasons. Star Wars themed tattoo designs are becoming quite popular among fans as it offers a ton of creativity and design choices.

The Jedi and non-human characters have always fascinated people in the movie series of star wars. Their captivating and brilliant character designs are among the best figures to get on your body as tattoo arts. The bright colors of the galaxy and space would make it even better on your skin. Let’s look at the 10 best Star Wars tattoos.

The Clone Wars scene pictures in this Star Wars tattoo is awesome and is done perfectly by the tattoo artist. The tattooed hero fighters in this tattoo are given dark blue-black shades of colors. And they both are wearing a mask on their face and a steel shield on their body. These Star Wars tattoos show dark side fights in the Galactic empire scenes between guys. Disney Star Wars universe is one of the favorite movie series, and the iconic characters in star wars fandom have always found their way into the extraordinary minds of star wars and clone wars fans. This Star Wars Clone Wars tattoo is a cool one to get in both your arms or both legs. The gun details are also done in style in this star wars clone trooper tattoo.

The artist’s Star Wars Clone Trooper gangster tattoo is the complete fan-loving scene given ink in our body together. These black and grey awesome Star Wars tattoos make a good background for your arms and legs to show off. Watching Star Wars, you would start to love the movies. This Star Wars sleeve design is a great choice to get tattooed. The lightsaber, Luke Skywalker, Storm Trooper, Sith Lord, etc., are portrayed in this Force Awakens, tie fighter star wars tattoo designs. The placing and layout of the troopers is done perfectly in this Star Wars troopers leg tattoo. You can also get this tattoo on your hands or your chest.

These Clone Wars-Star Wars tattoos are popular as sleeve tattoos due to all the elements that can be combined to create a design. These Star Wars clone trooper helmet tattoos feature the Star Wars helmet in the Disney series and movies which has been known for its design among youngsters. This clone wars echos tattoo is a lightsaber tattoo. It is a simple helmet inked in black and grey. It’s something any Disney Star Wars fan would love to see and adore. You can get this tattoo on the arm, wrist, or shoulder. You could also get them in color or even in a smaller size.

Star Wars has a lot of guys in its movie series and characters. But one of the female-centric characters that got our eyes into her is Ahsoka Tano. With her elegance and beauty, she could take them all down. Well, this tattoo of Ahsoka Tano is the best proof of it. You can get this grey-shaded tattoo on your arms to feel the power of beauty. The style in which the star wars character tattoo is drawn is pretty sharp. The cute and evil side of the character are portrayed through this star wars tattoo. The fans of these Star Wars characters like the death star, Darth Vader, rebel alliance, Millennium falcon, Princess Leia, Boba Fett, Baby Yoda, tie fighters, and Anakin Skywalker would love to get these tattoo features in their body with ink permanently.

This tattoo of iconic characters from Empire Strikes is a cool tattoo design that you might want to try out on your skin. This Star Wars Clone Wars Fives’s head tattoo is done in a dope style. Each of the characters is done well, giving the right choice of ink color. Also, this freestyle Star Wars Force tattoo design has a quote below of the prominent tattoo of five. The quote sentence says ‘Do or do not. There is no try’. This famous Star Wars dialogue is the perfect quote to get with these fantastic Star Wars tattoos. This Star Wars Clone Wars tattoo space force has Anakin Skywalker, Yoda, Ahsoka Tano, Obi-Wan Kenobi of the Rec Clone wars scenes. This tattoo also falls under the category of the Anakin Skywalker clone wars tribal tattoo series.

This tattoo is done from the inspiration of Clone Wars show face tattoo Jedi style artwork. This Star Wars character Hera Syndulla tattoo with the galaxy background brings out the inspiration feels in you. This Yoda-style Star Wars Yedi character tattoo is a fun, creative tattoo for you to try out. The Empire shade design can be seen at the backdrop of these colorful star wars tattoos. These tattoos no doubt will be fun to get if you are Star Wars fans and are obsessed with the characters like Hera Syndulla, Yoda, Jedi, Obi-Wan, Han Solo, etc. you can get this incredible star wars tattoo on your legs, arms, or even in your back in big size.

If you are one of the Star Wars series fans, you will love this design! These Clone Wars tattoos are some of the best Star Wars tattoos in our list. This B1 Battle Droid of the Clone Wars is given a mechanical look with a line box saying ‘Roger, Roger.’ The machine is drawn in a diamond pattern of a geometric size. An orange-red color of ink is given to how the B1 device is sketched. Guns are included in this tattoo design as well. The blue-white color ink is given to the B1 machine robot tattoo of the star wars series.

This tattoo is incredibly done, showing a scene at the bottom of the tattoo head design of Captain Rex. The tattoo artist used a straight-line style to complete this black line Star Wars tattoo design. Even though it is a fine line tattoo, the emotion is very well projected in this tattoo. The Star Wars scenes have a black figure and a space background in the image. You can get this tattoo on your arm sleeves or leg thighs. And it is totally up to you if you want to fill in colors in this acceptable clone wars tattoo.

This Ahsoka tattoo would be one of the prettiest ones you would have ever seen. Well, she is such a beauty and is everyone’s favorite. Her blue eyes that match her blue head and hair are just amazingly created by the Star Wars character design team. Her face speaks it all. And this tattoo is super lit to get on your arms or shoulder sleeves. You can get them on your legs and chest region as well.

This image has been referred to as a Star Wars symbol for many years. The gas mask with the goggles is getting its popularity among people who are star wars fans. This star wars tattoo can be done anywhere on your skin in a black freestyle drawing style. You can also get this design of many sizes and various colors according to your taste.

If you are looking for some more inspiration from this world-famous franchise, here are some tattoo ideas to check.