10 Amazing Mullet Haircuts That Any Guy Can Pull Off!

First off what is a mullet?

“Business in front. Party in the back.” Is the most iconic description of the mullet. Essentially it’s just that; neat short layers through the top and sides then left to grow long in the back. The term ‘mullet’ was first used to describe the hairstyle by none other than the Beastie Boys according to the Oxford English dictionary. This is seen in their 1994 song “Mullet Head” where Ad-Rock sings: “You wanna know what’s a mullet? Well, I got a little story to tell about a hairstyle that’s a way of life.” Along with: “Cut the sides, don’t touch the back.” Archaeological evidence suggests they were even worn in ancient civilizations such as Mesopotamia. Theories claim they were for the purpose of keeping their necks warm and dry whilst leaving their eyes unobstructed.

The Mullet In Popular Culture

Mullets came onto the scene in the early 1970’s with the likes of Bowie, Paul McCartney and Rod Stewart rocking the look. It was the 80’s glam rock era to the early 90’s however when it truly found it’s stride and was soon adopted all over the West. It became especially popular with country singers such as Billy Ray Cyrus and Alan Jackson and even Superman wore the style for a while.

The haircut’s popularity, unfortunately (or perhaps fortunately for some) didn’t last and today it’s become somewhat controversial with few having the guts to attempt it. Its luck may be beginning to change however as it’s experiencing somewhat of a resurgence amongst hipsters and millennials. Kpop bands such as BTS and BIGBANG, who are currently at the front of daring new looks, are also experimenting with the signature 80’s style.

How To Cut A Mullet

A well-cut mullet though on the controversial side can be more flattering than you might expect. It can generally suit any face type however it works best for round faces. The contrast of short/long elongates the face a little while creating the angles the face type is generally known to lack.

What to ask for? The answer will vary slightly depending on the type. Generally, you’ll want to ask for medium-short on the top and sides and cut short and clean around the ears. The hair should be left longer round back but a great blend is key for a more modern take. A disjointed look between short/long maybe just a little too jarring in our opinion but hey you do you. This is just a starting point, however, feel free to experiment in length variation just keep it nicely blended and you can’t go far wrong.

It’s a diverse title that essentially applies to all ten of the haircuts we’ll be covering. The ‘modern mullet’ is generally a shorter, more edgy and experimental take over it’s 80’s/90’s predecessors. The modern look is shorter at the top and usually taken in closer at the sides. The modern twist no longer demands such excessive length at the back either (unless you want it). Shorter all round, It can also be incorporated into styles for guys with curly or wavy hair too. We recommend a comb and a good pomade for this look. Keep the sides and back slicked down and do whatever you fancy with the top. 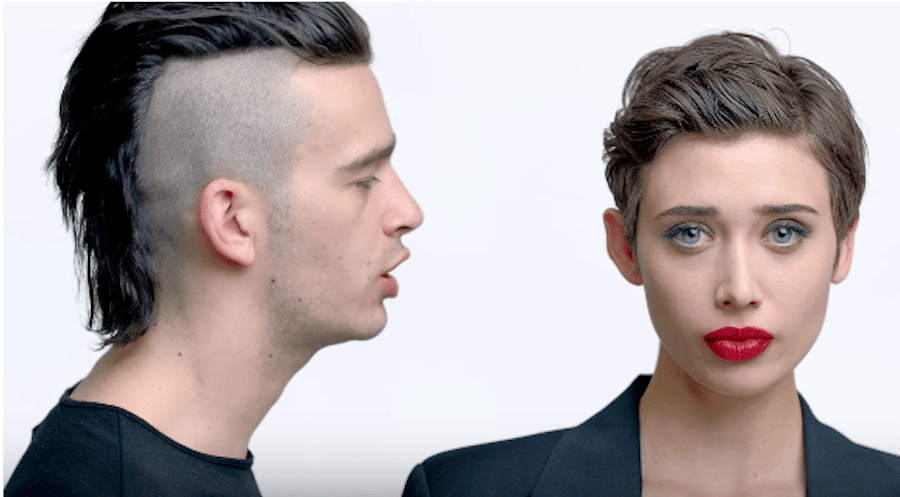 What’s more 80’s than a look that combines the two biggest hairstyles of the decade? The mohawk mullet that’s what and who better suited to it then The 1975’s Matt Healy? Playing no small part in reviving the 80’s signature sound in modern music it stands to reason he’d try reviving the mullet too. This version achieves a slicker, quieter version of a typical mohawk yet doesn’t lose its edge. Keep your sleeping mohawk in check by shampooing less to promote your hairs natural oils. You can also work in a mousse with your fingers or a comb to maintain the volume. The shaved sides really make an impact here so get them trimmed very regularly to maintain the sharp style.

Love the profile of the Mohawk mullet but want something less extreme? The faux hawk or ‘fohawk’ mullet might just be for you. The faux hawk keeps the mohawk’s silhouette yet has less of an edge as it maintains some length on the sides. This is not to say the faux hawk alternative is inferior to its cousin, in many ways it’s far more practical for the day-to-day. It can act as a more versatile alternative to the Mohawk option or a gateway to try out first. You’re still going to want to keep those sides short though just not as short as the mohawk variant meaning fewer trips to the barbers. A win for your wallet.

This cut demands a lot of texture. Scrunch in some sea salt spray and work in a mousse to towel dry hair. With your hairdryer on a mid setting use your fingers or a round brush to comb. Push the sides back while brushing the top up to create a greater volume. Apply a medium hold clay and rough it up through your hair to achieve a perfectly imperfect disheveled look.

Known for his flamboyant style, it should come as no surprise that the ‘Thirty Seconds To Mars’ frontman Jared Leto once rocked a mullet. This short variation is perfect for guys who are keen on the style but could do without the extra length. His short alternative has a great blend and the ‘mullet effect’ is subtle. It’s great if you aren’t looking to go overboard and are just wanting a slight edge to your next hairstyle. Leto showcases the versatility of the short variation here with the option of either wearing it down for the office or up and spiky on the weekends.

This look fuses the popular 80’s mullet with the timeless pompadour to create a distinctly unique style. Superbly blended, the hair is a medium length all over while left a little longer in the top and back. The sides are cut slightly shorter to stay closer to the face so as not to take away from the mullet silhouette. Joe Keery adapts Johnny Depp’s 80’s look with this combo to create a party in the back and the front. To style, work a golf ball size amount of volume mousse through towel dry hair. While blow-drying use a round brush to curl the top up, using your fingers to push everything else back. Your fingers will create more uneven strokes, perfect for the messy disheveled look you’re aiming for.

Perhaps the most difficult to pull off on our list, if you’re really looking for a standout look then the rat tail/ponytail mullet is for you. If you do decide on this style, however, we advise keeping the rest of your hair simple yet on-trend like Bowie’s above.

Whether you’re Asian or otherwise, the Asian mullet is a great option. Japanese and Korean mullets tend to have a choppier style but it’s the Kpop mullets we are here to discuss. Kpop members have been right at the centre of daring new styles in recent years and the mullet is apparently next on that list. On the left, we have an extra long style which incorporates the aforementioned ‘choppy’ look. On the right, we have a longer more contemporary style which looks great with longer hair hugging the neck. Whether these styles transfer from the stage to the streets remains to be seen but regardless there’s plenty of Asian options out there to draw inspiration from.

Really want to emphasise the ‘party’ of your mullet? Know longer styles suit you? This might just be the cut to go for. This look is clearly a more extreme version of the regular ‘do and is far more disjointed. If you really want to embrace the mullet to the nth degree then look no further.

There are plenty of dyed mullets out there. If you’re looking to dye yours we suggest peroxide blonde. The colour has become a massive trend over the last few years with the likes of Zayn Malik, Justin Bieber and Lucky Blue Smith being among the front-runners. If you’re already brave enough to attempt mullet-hood then you might as well go the full hog. With a peroxide mullet, you’ll truly be giving your ‘do a very modern twist.

Unless you work in the creative industries this haircut doesn’t exactly transfer to the office (though how we wish it did). Alexis Unno believes there’s a light blonde shade out there for everyone but it works best with darker skin. If you weren’t born with olive skin consider getting out in the sun. Though this look is achievable with dye at home a professional is strongly recommended if you’re naturally brunette.

So there you have it 10 amazing mullets, nine of which don’t belong to David Bowie. A mullet is essentially any hairstyle that’s left longest at the back. Because this definition is so loose it greatly hands itself to potential adaptability. Mix it up and make it all your own. A mullet will go in and out of trend so it’s up to your creativity to shine through and make the fads work for you!